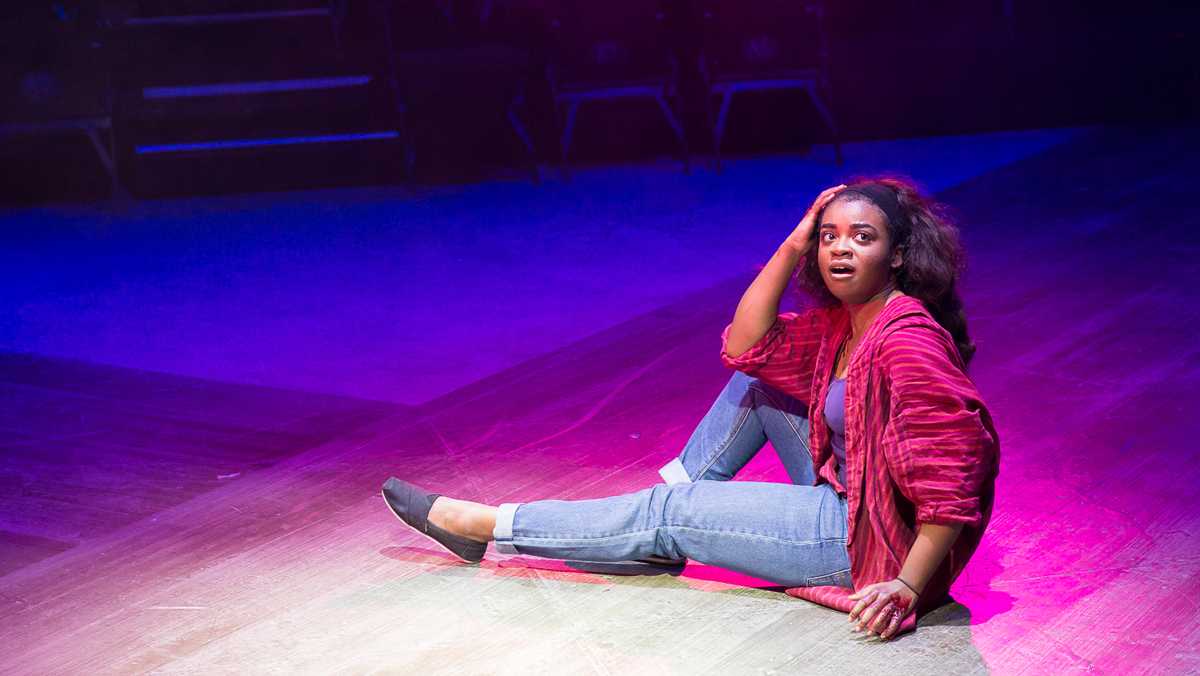 Courtesy of Sheryl Sinkow Photography
Senior Sandra Sackey plays Oya in the play "In the Red and Brown Water," which will be showing Dec. 5–10 in the Clarke Theater in Dillingham.
By Kate Nalepinski — Senior Writer
Published: December 6, 2017

The stage is dark. A bright light glows upon a young black woman, Oya, who lies silently in the center. A gargantuan, dangling tree sits on one side of the stage, a comforting log cabin on the other. Gods appear on the stage, and as their angelic vocals fill the room, Oya rises to her feet, smiling bright. For once, she isn’t thinking about her struggles. She feels free.

“Not many people are able to hear stories about women of color who are fighting to make a better life for themselves,” Kellik Dawson, sophomore acting major at Ithaca College, said. “Especially within the Ithaca community, this is something that our audience really needs to witness.”

Dawson is one of many students who has been working to bring the latest Main Stage performance, “In the Red and Brown Water,” to life at the college. The play will be performed Dec. 5–10 in the Clarke Theatre in Dillingham Center.

The play was written by Tarrell Alvin McCraney, who also wrote the play “In Moonlight Black Boys Look Blue,” which inspired the Academy Award–winning film “Moonlight.” The play is set in the fictional town of San Pere, Louisiana. The protagonist is Oya, a young black woman with a passion for running, who faces a dilemma when she doesn’t know whether to care for her ill mother or follow her interests at a state university. As Oya is faced with numerous pitfalls and the desire to care for a child, the play shows her transition into womanhood.

“I think one of the things that excites me the most about this play is that Oya is such a strong-willed fighter,” she said. “Knowing that alone really amps me up to play her. So even though she goes through those struggles and losses, she doesn’t back down from anything.”

“She asked me to think of all the losses Oya encounters to be like a brick, layering one on top of the other,” Sackey said. “I think for me, allowing that analogy … was really helpful for me in terms of justifying the ending moment of the play.”

Henderson said McCraney held Skype calls with some of the cast and production team to discuss the play and gain a deeper understanding of McCraney’s work.

“He was so engaged with the questions and the cross talk, and it just became this beautiful conversation that when I looked at my watch, I was like, ‘Oh gosh! We’ve held you too long!’” Henderson said. “And he said it was okay since he was having a great time.”

During the play, Oya falls into a love triangle of sorts — caught between “bad boy” Shango and the caring, concerned Ogun.

The play itself is influenced by Yoruba religion, which is primarily practiced by Yoruba peoples from West Africa. Dawson said the characters in the play are based on Orishas, Yoruba deities. Dawson plays Elegba, the deity who represents the Crossroads — a symbolic gatekeeper of change and life decisions.

“Yoruba religion is the oldest human religion,” they said. “I know Elegba is the owner of the Crossroads, so I’ve been doing research and understanding how he interacts within the world of play — sort of opening doors for people to face the future, for people to address their past.”

In January 2016, Henderson traveled to Cameroon, a primarily Yoruban area, to complete research in preparation for the play. She said that by that time, she knew she was going to direct “In the Red and Brown Water.”

“I was talking to the Yoruba chief, and he was telling me one of the things that happens is when his people come to the U.S., they leave behind who they are as Yorubans because they want to assimilate and become more like Americans,” she said. “But the thing is that if you spend time in an African community, a lot of the dances, a lot of the dress — you carry it in you.”

Henderson said she was able to relate this back to the play, as keeping heritage is a prominent theme.

“This is a lot of what’s going on in this neighborhood [of the play],” she said. “They may leave it behind when they assimilate — and as the generations become more and more American — but it’s still there. It never leaves them.”

“In my research, I found so many similarities between the neighborhood Tarrell based this fictional town on — the neighborhood he grew up in — and a town … just outside of Mobile that my grandmother lived in,” she said. “It had all these little houses. It was like a housing project very close to the bayou. There’s a bayou feel to the neighborhood because I did bring a little of the bayou I know into San Pere. They melded beautifully.”

Dawson said they can easily relate to the character of Elegba, as they both identify as queer black men. Dawson said they are using their minor in African Diaspora Studies to further understand the concepts and ideals in “In the Red and Brown Water.”

“When we started with the show process, our director told us … these people are black people in America who aren’t aware of their past because it was taken away from them in the slave trade,” they said. “I immediately thought, ‘Well, it’s good that I have this minor — because to show these characters reconnecting with their pasts, I have to start doing that on my own.’”

Outside of the show, Dawson has drawn parallels between the Yoruba deities and the way African Americans are portrayed in American cinema. They said that in the play, the deities mirror black stereotypes, and that the play works to reclaim and redefine these labels and stereotypes that white people have created for black people.

To prepare the actors for their roles as deities, Henderson said, she leads exercises that help the actors move and think differently.

“One of the warm-ups had to do with them walking the space, and I’d tell them what percentage of god was walking the space so they could find their center and understand how their gods move differently than they do and how that mix moves together,” Henderson said.

Dawson said they are interested in exploring the gray areas of blackness without a white gaze.

“I don’t like thinking about my community through the eyes of white people,” they said. “I don’t think it’s our job to care how white people take us when we have problems to work on ourselves. So this play is the place to view ourselves.”

Henderson said she puts a lot of expectations on her actors and that they meet and exceed them by allowing the audience to see parts of their culture. She said the beauty of culture is spotlighted in the play, and that viewers will enjoy it as long as they watch it with an open mind.

“They have put in so much effort to open themselves up and allow a sometimes hostile world some insight into their culture, honestly,” Henderson said. “And they trusted me and I trust them, and we put on stage the culture. Here’s an honest aspect of the culture. And if you look at it with an open heart and an open mind and you don’t look it at like statistics, or othering, you’ll see how beautiful it is.”