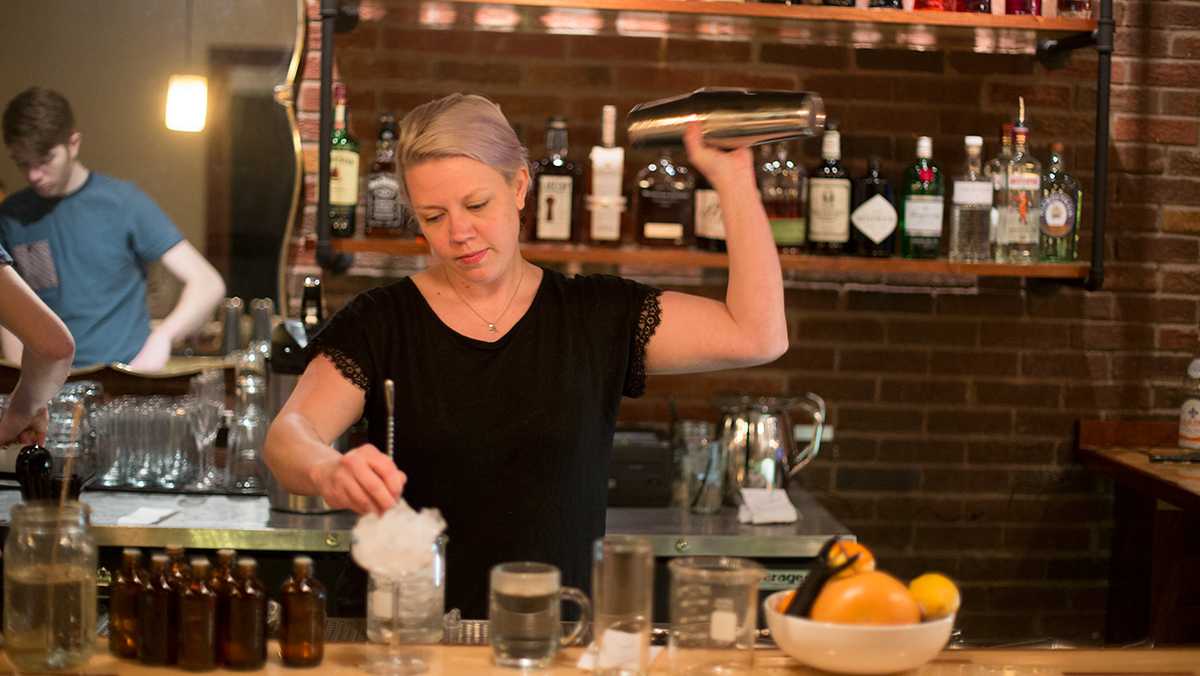 Tucker Mitchell/The Ithacan
Melody Faraday, bartender of The Rook, mixes a cocktail, one of many on the restaurant's extensive drink menu.
By Steven Pirani — Senior Writer
Published: February 15, 2016

There’s a chatter filling The Rook: clinking glasses and sliding plates; rattling shakers and enthusiastic, laughing diners; bubbling duck fat and fresh beer. It’s a Thursday night, and every inch of the space is occupied by eaters and drinkers.The restaurant is bustling despite the cold trying to sneak in the door. Somewhere, amid the fray, a customer’s voice cuts through:

“This place is hopping!”

It’s a sign of good health for The Rook, located at 404 W. State St., once the location of the now-closed Fine Line Bistro. The restaurant, which offers casual, modern-American dining, is the newest addition to Ithaca’s food scene. Only a few months before, this space was under construction, and with the restaurant’s grand opening — Jan. 19 — not quite yet a distant memory, co-owner Autumn Greenberg said the reception is already showing signs of good things to come.

Greenberg is joined by fellow co-owners Gentry Morris and Lila Donaruma, together boasting an impressive portfolio of restaurant and bar experience. Morris, The Rook’s executive chef and the leading mind behind its menu, has many years of experience feeding Ithaca’s insatiable foodies, previously acting as sous chef at Le Café Cent Dix and Mercato Bar & Kitchen. Meanwhile, Greenberg and Donaruma have both helmed the bar at local cocktail spot the Argos Inn, assuring patrons that anything served is washed down with only the finest liquids.

The trio’s vision for The Rook is simple: to offer Ithaca laid-back, quality eats, regardless of whether a patron is looking to sit down for a formal meal or snack on some appetizers with a cocktail. Donaruma said this versatility in dining is integral to the vision she and the rest of the team had for The Rook.

“I think people are coming later, for cocktails and snacks, and that was really the idea,” she said. “To create a place where you can sort of ‘choose your own adventure meal.’ You don’t have to come and eat a traditional three-course meal. You can come and have a bunch of snacks and have some cocktails.”

What results is a menu that offers everything from snacks and finger foods — try the duck nuggets or the dirty fries — to larger plates, including an unapologetically delicious pork steak. Morris said he wanted the menu to reflect the restaurant: With its concrete floors and lone brick wall, The Rook could have been a chic, industrial space. Add the large mirror, which backs the bar, and the art hanging on the walls, and the space softens, mellows out. Walk in one chilled Thursday night, and The Rook feels casual, yet capable.

“I think that the lack of tablecloths and things like that, maybe you don’t expect fine dining,” Morris said. “But all the techniques are there. All the food is done with some real care.”

While certainly not the largest in Ithaca, there’s plenty to explore on The Rook’s menu, with plates of trout, spaetzle and gnocchi decorating tables throughout the evening. Rick Bayo, who visited the restaurant Thursday night, praised The Rook’s small menu and said it hits all the right notes.

While the kitchen dishes out entrees and appetizers, the bar, too, toils away. Cocktails are in high demand at The Rook, with seven house cocktails available to order. Notable among the bunch is the Old Man Winter, a warm-you-up punch of rye and Chartreuse that promises to take the edge off the winter chill — and everything else, too.

Negroni are served, perhaps for the first time in Ithaca, on tap, while another six draft lines ensure that there’s some quality craft beer in the mix as well. With Bar Argos alumni in the mix, Greenberg said there was a bit of an expectation for them to meet from Ithaca’s drinkers.

“Ithaca loves cocktails, and I think there was an expectation, with enough faces from Argos, that we’re going to put out a good quality product,” she said. “People have loved what they’ve had so far.”

With what looks like a successful inaugural month behind it, The Rook seems prepared to keep churning out happy customers. For Bayo, their work certainly isn’t in vain.