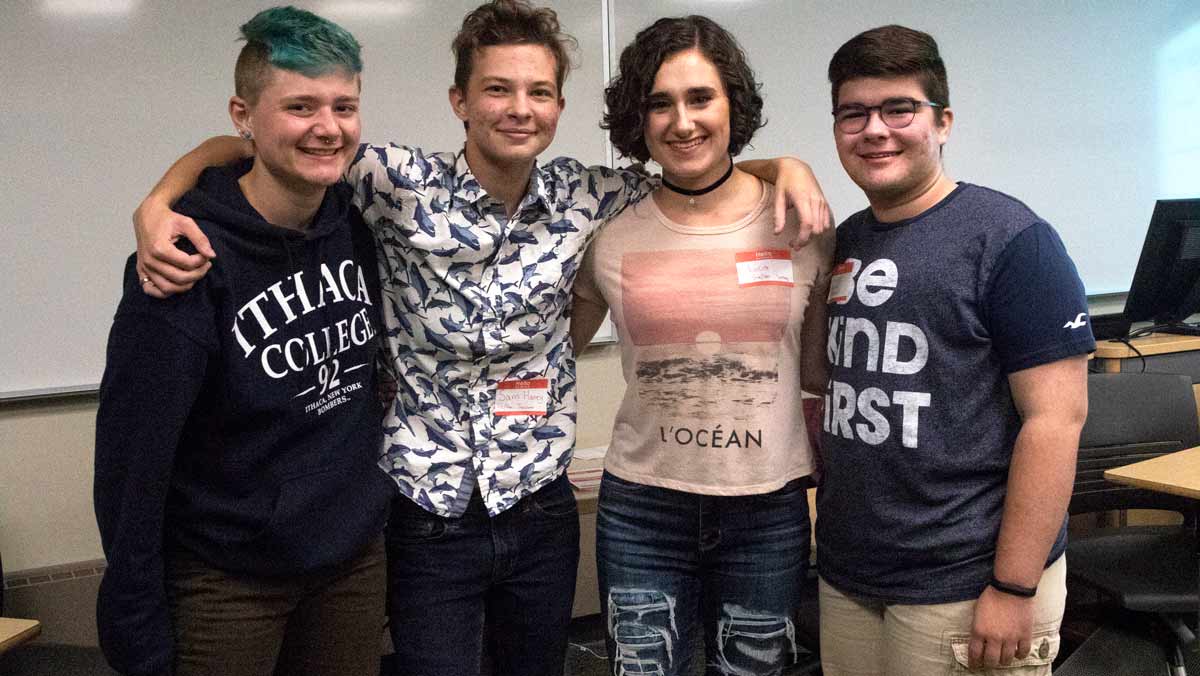 When now-sophomore Luis Valderrama was first figuring out his gender identity in high school, he could only find narratives of white, masculine trans men online. He said that as a more feminine Colombian trans man, he could not and did not want to fit into that image of “white” and “masculine.”

During his freshman year, he and now-sophomore Clarence “CJayy” Armour noticed there was not a space specifically for LGBTQ people of color. The existing predominantly white LGBTQ spaces like Prism and Spectrum also didn’t feel inviting enough.

In response, Armour and Valderrama created a space for people of color LGBTQ students called IC Proud. In Spring 2018, it joined another group, Keshet, that has emerged this semester specifically for Jewish LGBTQ students. The creation of these new groups points to a larger trend emerging in the LGBTQ community at the college — students are working to create more intersectional, LGBTQ-friendly spaces.

This rise of intersectional LGBTQ groups may appear new, but Luca Maurer, director of LGBT Education, Outreach and Services, says the idea is not new. Students in the past had expressed interest in creating these organizations but may not have felt brave enough or found others willing to join, he said. This may be the case because students feel freer and safer to share more of their identities and experiences, he said.

Valderrama said being predominantly in white, LGBTQ spaces can be difficult. Even though everybody in the space may be bonded by a common marginalization, there are still other differences, like race, that made it difficult for him to feel safe and share his experience.

“I found it hard sometimes to be with white LGBT people, even if we are all trans, because of microaggressions, cultural differences, etc.,” he said.

Similarly, when Austin Reid, Hillel Springboard Innovation fellow, talked to alumni and current Jewish students, he found that there was a similar space missing for Jewish LGBTQ students and wanted to offer them the same space to speak and be heard. He said he wanted to fight assumptions about Jewish LGBTQ people and decrease the sense of isolation for those in the community.

“It’s possible for many but not all LGBTQ Jews to hide either their queerness or their Jewishness or both,” Reid said. “And we often have to come out about these two essential identities, as well as contending with the assumptions people make about our lives and about what being Jewish and queer means to us.”

Sophomore Samuel Haney, treasurer of Spectrum, said he’s glad that those who have experienced multiple marginalizations are able to create and find spaces to talk about it. He said although it may not always be intentional, Spectrum isn’t always able to focus on the intersections of race and LGBTQ issues in every topic or activity.

“It will be like a one–week or two-week discussion,” he said. “Whereas every single meeting for IC Proud is on the intersections of that because there is so much to discuss. We’re not going to spend that time because we are a broad, general LGBT group.”

Sophomore Grayson Stevens, president of Spectrum, said that his group may have not done the best in the past to welcome people who have intersectional identities, but Spectrum is committed to fixing that as well as supporting the new LGBTQ affinity groups.

Armour said IC Proud can focus on shared experiences and amplifying the voices of the people of color LGBTQ community in all its meetings. In the past, it has had meetings devoted to specifically LGBTQ people of color artists and celebrities, the intersection of race and religion and the homophobia that can exist due to living in nonwhite households.

Sophomore Avital “Tali” Abraham is excited to have a space that emphasizes the needs of Jewish LGBTQ students and hopes that Keshet can also become a place to focus on marginalized voices and find community.

“There are some needs that are specific to the queer Jewish community that are being filled by this club, and I’m excited to have a place to get to know other queer Jews on campus,” Abraham said.

Sophomore Noah Bach has been involved with the international organization of Keshet before. He said that along with being a place for community building among Jewish LGBTQ students, he hopes this club will be open to nonqueer, non-Jewish people.

“It is a club that, at least I would like, to see more geared towards allies,” Bach said. “There is a very definite effort to unify the LGBT community. That should not stop. … However, if we’re not including allies in the conversation, then, you know, there are only so many LGBT+ people who are going to show up to the polling places.”

Maurer said both spaces are important and speak to students’ needs.

“I think it’s crucially important that we don’t just have communal LGBTQ groups for everyone, but also groups where folks who are people of color can have space to talk about and strategize around what does it mean to be an LGBTQ person of color,” he said.

Sophomore Lucia Tepper, secretary of Spectrum, knows how it feels to be underrepresented in a space that she thought was meant for her. As a bisexual woman, she said she sometimes felt like her identity was erased in Spectrum.

“If things hadn’t changed, I definitely wouldn’t have come back,” she said. “If someone had said to me, ‘Hey, there’s a club just for bisexual, pansexual people,’ I would’ve said ‘Oh great,’ and I would’ve joined that instead.”

Tepper worked to make Spectrum more accepting. She became a board member to let people who have felt marginalized in the space know that they are welcome.

“I think it’s good that people are creating their own clubs,” she said. “It is our job to say, ‘Hey we don’t want you to feel excluded. Go to your own club, … but also come here, and you’re just as welcome.’”