Living room concerts brings live music back to its roots 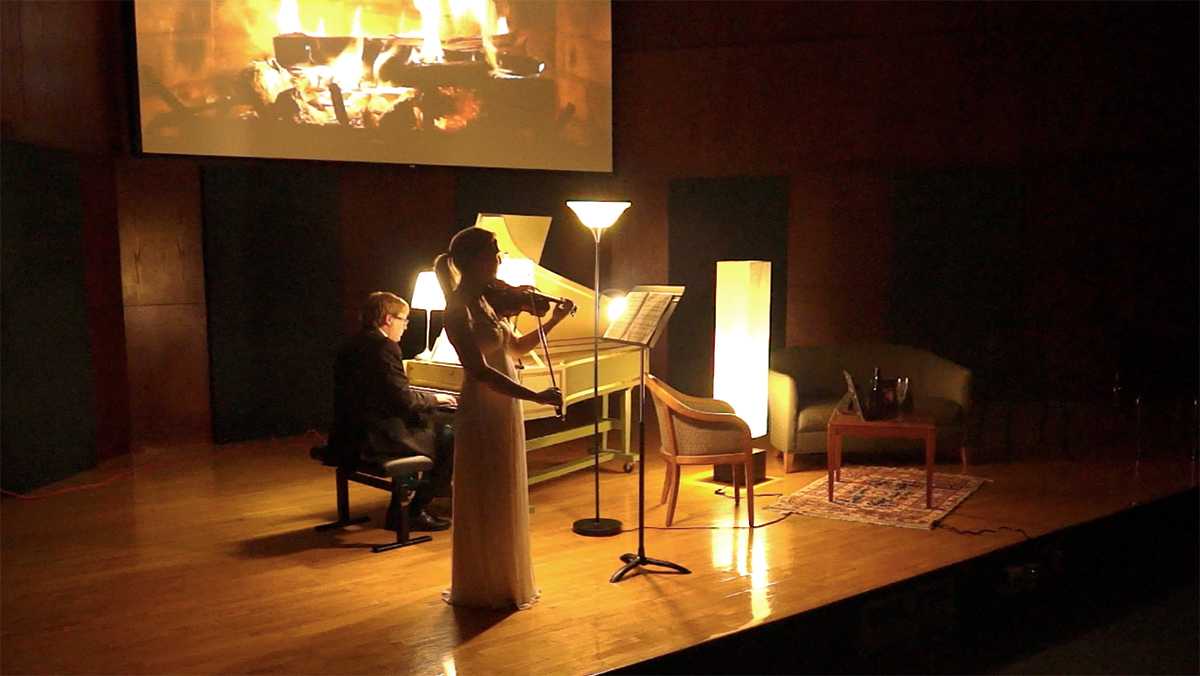 Courtesy Timna Mayer
From left, Manager of Concerts and Facilities Erik Kibelsbeck and graduate student at Ithaca College and violin instructor at Cornell Timna Mayer perform at the first living room concert March 26 at Nabenhauer Recital Hall. Mayer plans on hosting a concert once a month.
By Silas White — Staff Writer
Published: May 3, 2017

While classical concerts are typically associated with formality, one instructor is trying to promote a more relaxing setting for her repertoire: a stage decorated with a couch, lamps, family photos and a virtual fireplace.

Timna Mayer, graduate teaching assistant at Ithaca College and violin instructor at Cornell University, brought the idea of living room concerts — concerts held in an informal setting where the stage is designed to look like someone’s living room — to the college. She said she wanted a space for musicians to perform without the usual stress and formality of a concert.

“I was thinking about the music school and my profession, and I couldn’t remember a time I heard someone say, ‘I’m doing this because it’s so relaxing and fun,’” she said. “Usually, it’s like, ‘Oh, no. I have to go practice.’”

Mayer recalled studying violin herself from a young age and how playing for fun transformed into a more austere environment as she began studying. Her idea for living room concerts came, in part, as a desire to recapture that feeling of first discovering her passion for playing.

“I started playing violin when I was little because I loved the sound of it and I loved playing,” she said. “At some point after I started studying … it just became this really strict environment.”

Mayer said her students, mostly nonmajors, have wanted to perform but were intimidated by a typical concert setting.

“The concert atmosphere never made sense for me,” Mayer said. “Why would you be by yourself on a huge stage? … How can you communicate your feelings when you are so far away from [the audience]?”

While traditional solo music performances have the performer dressed formally and playing on a stage far away from the audience, living room concerts aim to make the experience more personal for both the audience and the performer. She said she wanted to recreate what it was like for 19th-century composers to get together and perform for each other.

“Composers like Shubert, for example, used to get together at their houses and play in their living rooms,” she said. “And he would invite all these different artists and musicians and just play for each other.”

Mayer is planning the second living room concert from 6 to 8 p.m. May 7 in Nabenhauer Recital Room. There is no dress code, and anybody is welcome to sign up and perform — both students and faculty, not just those who study with her. At the end of the concert, Mayer said, there will be a free improv session for anyone to come and onstage and play.

Part of her motivation is to bring musicians together and celebrate music rather than treating it as a competition. She said that at high levels of performance, musicians sometimes get to a state where they are scared of failure or scared of not being good enough.

“I was thinking about what happened to the music world, that it’s become this state where we’re always scared and ‘Oh, my God. Other people might be better than we are.’”

Freshman Emma Rabinowitz attended the first concert and will be performing in the upcoming show. She said she likes the idea because it gives performers a chance to play without the usual pressure associated with student recitals.

“I thought it was a really cool experience because when we do concerts here, it can be very stressful,” she said. “They’re very formal. But having a living room concert in an informal setting while still playing great music is a good way for us to not feel as stressed and be more relaxed. It feels much more natural.”

Rabinowitz said that as a freshman, she hasn’t had much experience playing her own recital but that she thinks living room concerts will be a great way for her to experience one in a comfortable setting.

Rabinowitz plans on playing “Légende” by Wieniawski on violin.

Senior Benjamin Pawlak, a piano performance major, accompanied soloists in the last living room concert and will perform a solo himself in the upcoming concert. Pawlak, who has been friends with Mayer for a few years, said he feels the relaxed environment comes not only from the decorations but from the audience as well.

“There are far more audience members than performers at any given concert, and I think they really dictate the vibe,” Pawlak said. “Walking into a concert where you have a fireplace projected on a screen and the lights are low … it’s a very homey environment. It helps the audience relax and not view it as some sort of event where you have to be quiet and behave.”

Going forward, Mayer said, she would like to hold a concert each month. In addition to promoting a stress-free environment, she said she wants to foster inclusivity and collaboration among musicians attending and performing at the concerts.

“It’s a good platform for people to just chat and be like, ‘Hey, I really like your band. Can I join you guys once in a while?’” she said. “There’s not enough communication between students because we’re all so tied up in our coursework.”