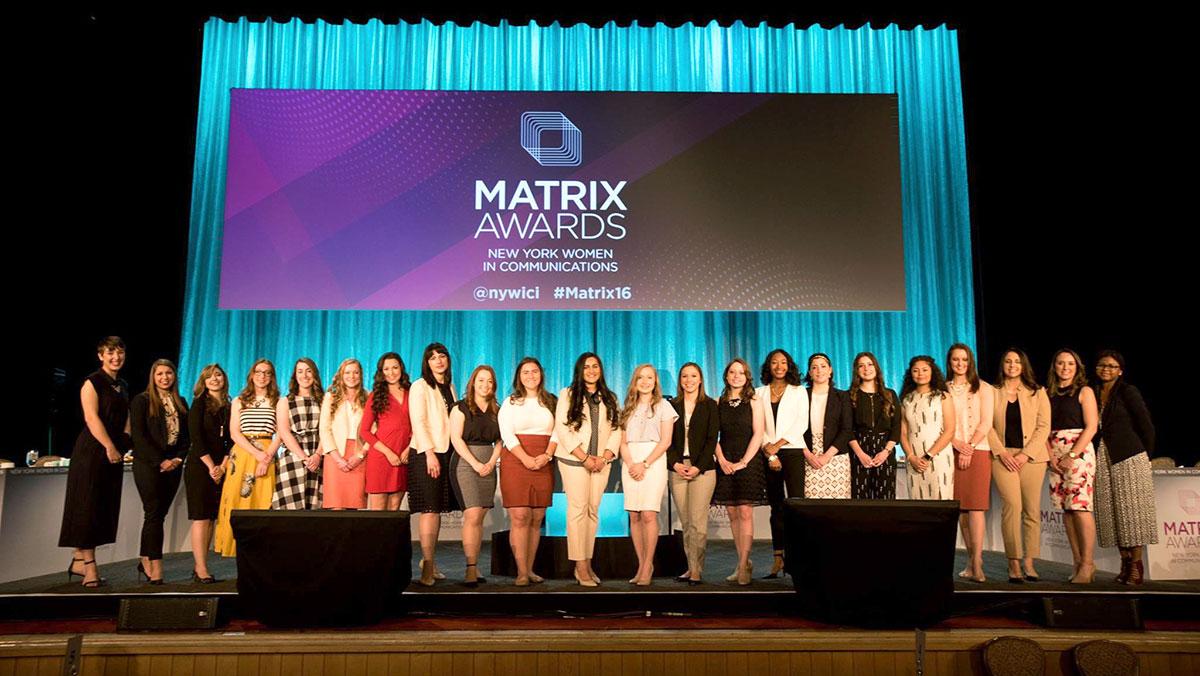 Courtesy of Maryanne Russell Photography
The 22 NYWICI scholarship winners, including the six Ithaca College women, pose on stage at the 2016 Matrix Awards on April 25 in New York City.
By Jacqueline Borwick — Staff Writer
Published: May 3, 2016

Along with receiving the scholarship, the students went to the Matrix Awards, hosted by NYWICI in New York City on April 25, to receive their awards, attend career-building workshops and meet many other accomplished women in the communications field. The New York Women in Communications Foundation awards about 20 scholarships to graduating high school seniors and undergraduate and graduate students each year, according to the NYWICI website. These women demonstrate academic excellence and financial need, and are currently pursuing a career in the field of communications. The scholarships are awarded in the amounts of $2,500, $5,000 and $10,000.

Past winners of NYWICI scholarships include Arianna Huffington, Barbara Walters, Christiane Amanpour and Geena Davis. Women who are currently making an impression on the communication industry were also honored alongside the scholarship recipients, including Lena Dunham, creator and star of HBO’s “Girls”; Mellody Hobson, president of Ariel Investments and a CBS financial contributor; Liz Kaplow, founder and CEO of Kaplow Communications; and Janice Min, co-president and chief creative officer of the “Hollywood Reporter.” These women were recognized and gave advice to the recipients as they go forward in their careers and enter the workforce after graduation.

Gardner, a film, photography and visual arts major, said the Matrix Awards highlighted many issues women in communications are facing and opened up a forum for support and discussion among the women present.

“Women have historically never been given power,” Gardner said. “Being in a room full of successful women who are not only working for themselves but for other people was such an amazing experience.”

As an integrated marketing communications major, Latini said the students representing the college actually have much in common despite their different majors and varying interests.

“All of the IC NYWICI scholars are incredibly passionate, driven, involved and active in the campus community,” she said. “Additionally, each of the NYWICI scholars found a unique way to combine their passions with their major,” Latini said.

NYWICI is part of a larger organization that has university and college chapters around the country. The club was founded at the college in the Roy H. Park School of Communications in 2012. Baldwin, a television-radio major, is the current president of the club and was also one of the students honored at the Matrix Awards.

Hartley, a communication management and design major, is currently co-chair of events for the club and will take the position of communications director next year. Hartley said the chapter offers an introduction to the national organization and the opportunities it holds for students.

“During our organizational meetings, we always reference NYWICI, encourage members to apply for the scholarship and have past scholarship members involved in the organization, which is one reason why I believe we have so many scholarship winners,” Hartley said.

Gardner said the Matrix Awards highlighted the importance of the organization and the work that women in communications fields are doing.

“NYWICI embodies everything I am striving for in my communications career,” Gardner said. “I think Lena Dunham put it very accurately during her speech at the Matrix Awards when she said women are not ranked, but linked. NYWICI provides a platform for women professionals to uplift and propel one another. As a feminist, this is fundamental to my approach to making the communications field more accessible to women and creating a supportive environment.”