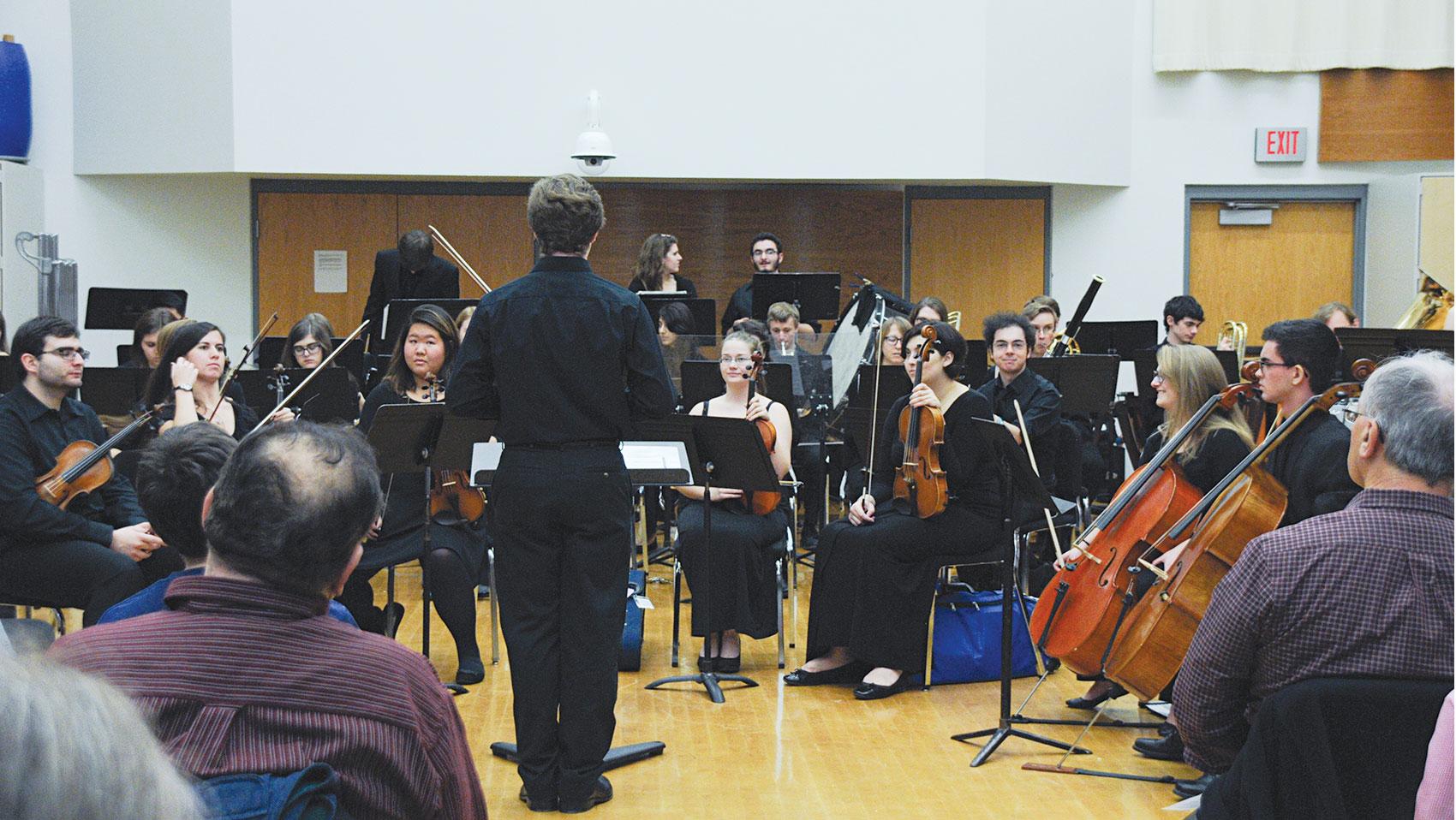 Kendyl Bennett/The Ithacan
The Ithaca College Media Orchestra currently has about 40 to 50 students, including music and non-music majors.
By The Ithacan — Staff Writer
Published: November 11, 2015

From the dramatic music compositions of “The Pirates of the Caribbean” to the quiet instrumentals of “Cast Away,” Ithaca College students can now show off their talents through television, movie and Broadway music in the Ithaca College Media Orchestra.

Senior Alex Kemp and sophomore Nick O’Brien came up with the idea of the Media Orchestra last semester. The two music majors were involved in the Gamer Symphony Orchestra but wanted to create an ensemble that brought together music from different film productions, O’Brien said.

“Video games were never really either of our things,” O’Brien said. “We were both into movie music, so we got this idea: ‘Hey, what if we created something like Gamer Symphony Orchestra but for music for movies, TV shows and Broadway that [have] great music, but we never get to play it ever?’”

Student musicians found out about the ensemble through Facebook, word-of-mouth and posters hung around the campus. The ensemble now has around 40 to 50 musicians, some of whom are music majors, but the majority of them are non-music majors, Kemp said. Regardless of instrument, year or major, Kemp said they want anyone who wants to be involved to be involved.

“We had somebody come to rehearsals who played bass clarinet, so we transposed a bassoon part for bass clarinet,” she said. “We do have a chorus as well. We were debating [what to call it]. We didn’t want people to be like, ‘Oh, it’s an orchestra. I play saxophone, so I can’t do it.’ We have people who play saxophone. … There’s drum kit, guitarists and a whole variety of stuff.”

Junior biology major Cienna Lyon, who plays french horn in the ensemble, said she was very appreciative participation is open to non-majors because it gives her another opportunity to play music even though she is not in the music school.

“It’s a really nice way to get a group of people together who are passionate about music,” Lyon said. “You get to actually play this music you’ve been hearing your whole life. Anyone can join it at any skill level. I enjoy the music they play a lot more, only because it is a lot broader than what a lot of the major ensembles will play.”

The ensemble had its first concert 5 p.m. Nov. 7 in the Theodore Presser Foundation Rehearsal Hall in the James J. Whalen Center for Music.

Junior television-radio major Jessica Sheptin performed in the choir for the finale, “Do You Hear The People Sing,” from “Les Miserables.” Sheptin said she hopes the ensemble will gain even more popularity in the future, possibly as much as the up-and-coming Gamer Symphony Orchestra.

“Whether they’re non-majors or music majors, every one of them is absolutely wonderful at what they do,” Sheptin said. “I like it, and I wish more people came to it as audience members and an ensemble because I think it could be like the [Gamer Symphony Orchestra] if more people could come and lend their expertise.”

Kemp said she would like to have the ensemble put on a concert with the video synced in the background. The ensemble is also hoping to include smaller bands and more theater majors, she said.

“The ‘Friends’ theme song is [performed by] a band,” she said. “If someone has a rock band and they want to do the theme from ‘Friends,’ sure, go ahead. Put it on our concert. We also hope to get some musical theater people involved so they can come to the concert and sing. We are definitely hoping to expand it.”

O’Brien said while he was picking out the music, he wanted to include anything that would attract people to come to the concert. This music included pieces from the film “How To Train Your Dragon” and the television show “Game of Thrones.” The ensemble closed the night out with a piece from the Broadway hit “Les Miserables.”

Lyon said she hoped the audience could sit down, listen and still feel the dramatics of the film, even without a television screen in front of them.

“Movie orchestrations are not just background music,” Lyon said. “It’s important that we can show that work went into every part of the movies [they] watch, including the music. … If you feel the emotions that the movie made you feel, it’s because the music is doing that for you. Music helps you feel those emotions.”