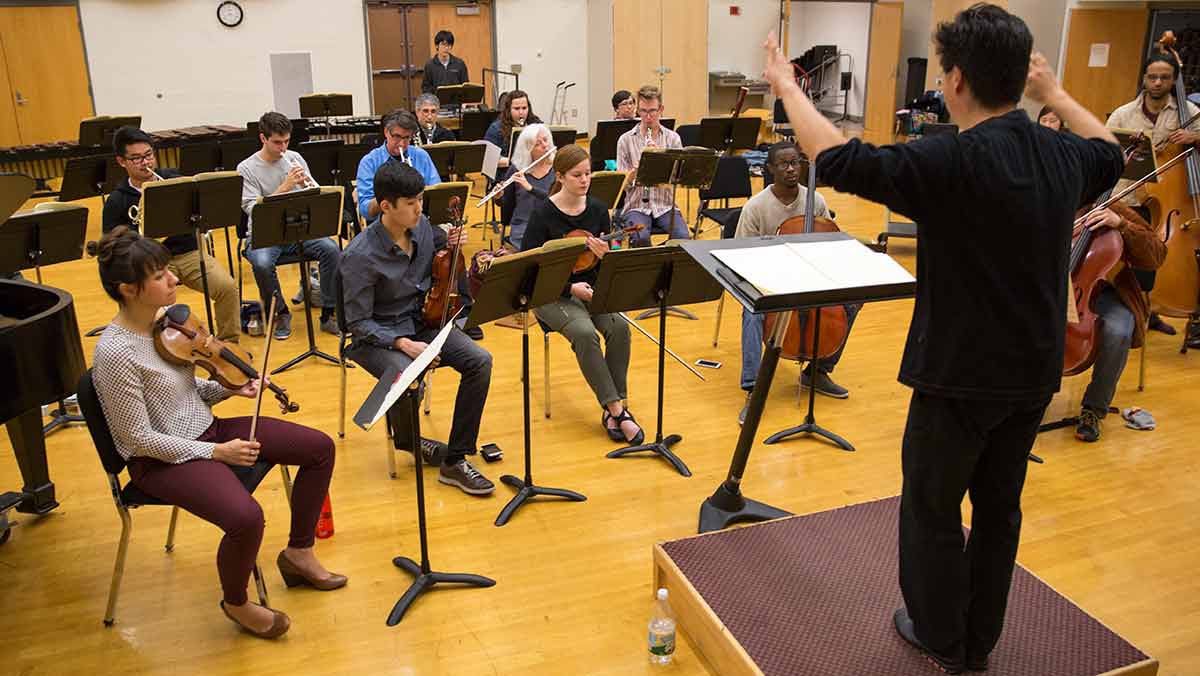 Passing by the James J. Whalen Center for Music at Ithaca College, illustrious compositions can be heard being played by students rehearsing in their designated practice rooms. Over on the other side of the hill, similar sounds ring through the halls of Cornell University’s Department of Music.

In an effort to meld these sounds together, professors at these institutions are debuting ICU Sound Works, a collective orchestra formed between Cornell and the college.

With the help of professional new music performance group Ensemble X, ICU Sound Works, which will hold its first performance at 8:15 p.m. Oct. 30 in Ford Hall, integrates students, faculty and professional players in an effort to create a musical community among musicians in Ithaca.

Xak Bjerken, music professor at Cornell and featured soloist for ICU Sound Works, said he has worked for a long time to bring this group to life.

“For years, the faculty has been working together at Cornell and IC,” he said. “We thought of ways to encourage more interactions between the schools at a student level, and so this is the sort of first kickoff concert of what we hope will be continued projects, hopefully spearheaded by students in the future.”

“When you say ‘new music ensemble,’ it simply means the music of our time, music by composers who are generally living,” he said. “[It’s] music that’s been written in the last 10 years, so very contemporary, very new music.”

Meyer also said he believes this concert will bring forth a greater sense of community between the schools in addition to being a great learning experience for students.

“There’s been a handful of performers that have been very active in collaborating over the years … but there’s been very few times where we’ve gotten the students together from both schools and then also given our students here the opportunity to perform with the professional members of Ensemble X,” he said. “Part of the point is to collaborate and not be in our own little bubbles on different hills, and the other point is to give our students a really intensive, professional experience playing alongside professionals who are experts in new music, so they’ll play next to them and learn through that experience.”

Bjerken said he agrees with this, stressing the fact that the musicians are doing this during their free time.

“The point to note is that everyone is doing this for free,” he said. “No one’s getting paid. They’re just doing this because they believe that there’s communal importance in it.”

With a focus on contemporary music, ICU Sound Works will perform a variety of international works as well as a piece written by a Cornell graduate student. The concert will also feature “Nazareno,” an extensive piece written by Argentinian composer Osvaldo Golijov. The work, which has never been played in the United States before, highlights the vibrant dynamic and excitement that is found within new music.

“The Golijov that we’re doing with the two pianists is just filled with Latin dance music, and it’s about a 25- to 30-minute crazy Latin fiasco,” Meyer said. “It’s really fun. There’s four percussionists with extensive setups and tons of Latin rhythm … [It’s] all sorts of music derived from that tradition and put into different context.”

Karl Paulnack, dean of the college’s School of Music and featured soloist, also said Golijov’s piece highlights the composer’s ethnic background through the music itself.

“He’s an Argentinian Jew, and so he writes from so many different cultures,” he said. “He writes from South American culture, and there’s klezmer in his music from his Jewish heritage, and there’s folk music in there. He’s a very serious composer and a very kind of folk composer at the same time.”

Yet Paulnack said his excitement for this event isn’t merely because of the performance itself, but the chance to strengthen interpersonal relationships with his fellow musicians.
“For me personally, the chance to make music with my students is just off the charts,” he said. “It would be like having all your students over to your house for dinner … [It’s] this chance to connect with each other, doing the thing that you love most. For musicians, typically, it’s the thing that makes us who we are. It’s a bond that you develop with another person that you really can’t develop any other way. That’s what I’m really excited about.”