New club encourages students to live life to the fullest 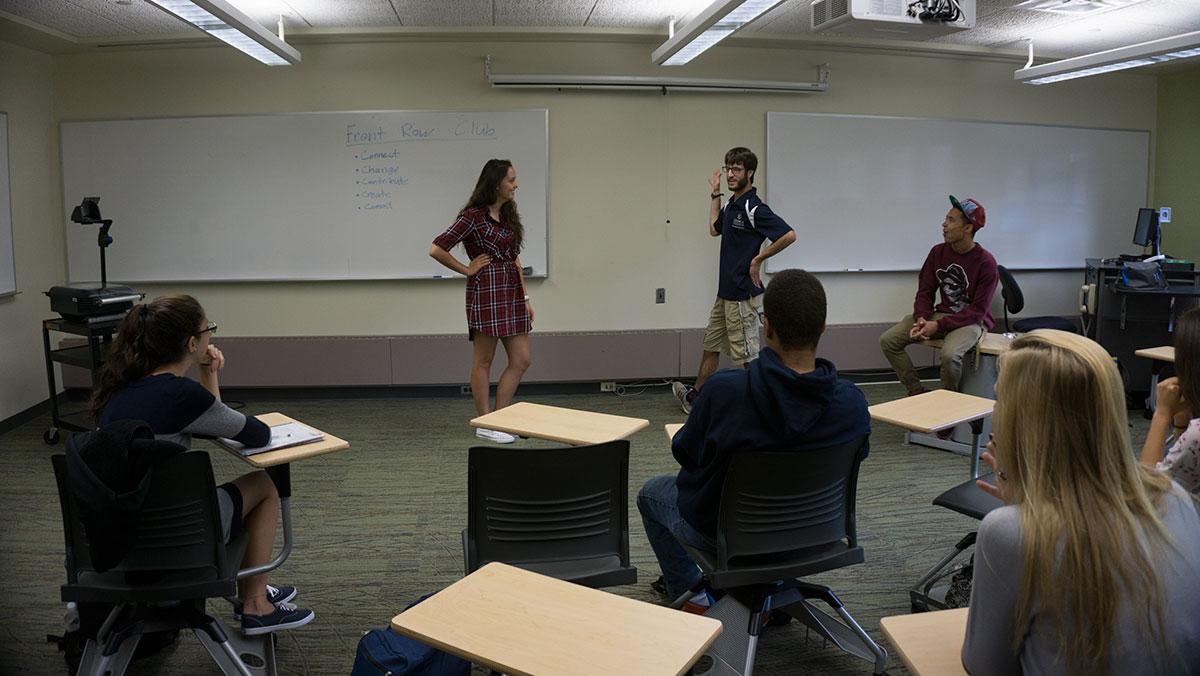 Many people wait in line for hours to sit in the front row of a concert or to ride in the front seat of a roller coaster. One organization new to Ithaca College’s campus is taking this philosophy to its maximum by encouraging students to take the initiative to make the most of their lives in every situation.

Senior Kristopher Bosela and sophomore Tyler Reighn, co-presidents of the college’s Front Row club, first encountered the Front Row philosophy last spring when they and three other students from the college attended a leadership and personal development conference in Hershey, Pennsylvania. Though the students went to the conference with the intention of finding speakers to perform at the college, they didn’t expect to meet Jon Vroman, co-founder of the Front Row Foundation and keynote speaker at the event.

Vroman spoke about his national organization, which will be celebrating its 10th anniversary this month. From the foundation’s initial concept, Vroman created a campus version of the organization that focuses more on student leadership, self-development and giving back to the community. The students said they were inspired by his words.

“He took us by the ear, took us by the hearts, and we just ate it up,” Bosela said. “We wanted to introduce this idea to campus, and it just happened that we met him at the right time with the right group of people.”

After hearing Vroman’s speech and completing a workshop, Bosela and Reighn approached Vroman and began discussing how to bring his message to campus.

Since then, Bosela and Reighn have been in constant communication with the Front Row community. The Front Row club was officially recognized last spring at the college, but the team continues to build up the organization.

The organization, which Bosela said is more of a movement than a club, promotes a way of living for college students emphasizing self-improvement and community service.

“We’re focusing on personal growth and teaching people how to give back in a big way to the IC community, the community of Ithaca and the world,” Bosela said.

As a part of the pilot program for the national organization, the Front Row club works on campus to promote Front Row’s values. Rebecca Herzog, director of events and fundraising support at the national Front Row Foundation, said these values, also known as Front Row’s five C’s, summarize the organization’s main message for the community: to get together on their college campus to foster community by connecting, creating, changing, committing and contributing to themselves, their campus and the greater community.

To kick off the Front Row club’s efforts this semester, the team is bringing Vroman to speak at the college Sept. 21.

Senior Julie Nishi, treasurer of the Front Row club, said club members want students to understand Vroman’s message and hope it will help students get on board with Front Row’s philosophy.

Bosela said the club will get involved in different service projects in the community, develop workshops to present at the college’s Student Leadership Institute sessions and demonstrate an active presence at campus events.

As a goal for the spring semester, Bosela said he hopes to be able to sponsor someone from the Ithaca community through the national program.

Bosela and Nishi both stressed the importance of having the Front Row club on campus, mentioning how this movement can impact students’ lives positively. Bosela said he feels a personal connection to the Front Row philosophy because it has helped him pursue his passions and live his life the way he wants.

“There are a lot of tough things you go through and a lot of life lessons you learn in college in order to grow into the person you want to be,” Bosela said. “I want Front Row to be here because I want people to have the confidence and the tools to go after what they’re really passionate about in life.”