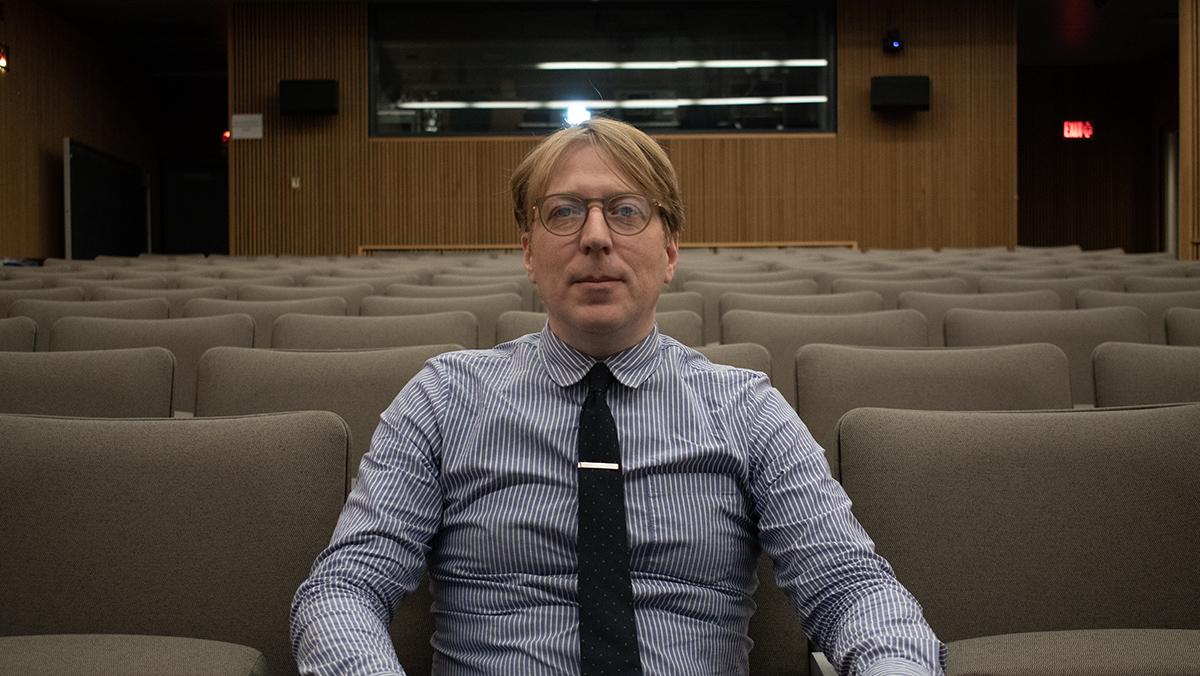 Elijah Cedeño/The Ithacan
Professor Andrew Utterson will join fources with FLEFF and Cinemapolis to teach a brand new course in Spring 2023 on the history of film festivals. The course aims to include students of all majors.
By Jess Williams — Staff Writer
Published: November 15, 2022

A new course being offered to Ithaca College students in Spring 2023 dives into the history of film festivals and the operations of the local Finger Lakes Environmental Film Festival (FLEFF).

Cinematic Currents: FLEFF and the History of Film Festivals will involve students with the processes of running a film festival as they work closely with FLEFF, the second oldest environmental film festival in the United States. The course is co-taught by Andrew Utterson, associate professor in the Department of Media Arts, Sciences and Studies; Rachel Schaff, assistant professor of Media Studies at Mercer University; and Brett Bossard ’95, executive director of Ithaca College’s Office of Alumni and Family Engagement and former executive director of Cinemapolis.

Utterson and Bossard are associate programmers for FLEFF, and Schaff is an associate producer for the festival. The three of them converge their passions for film festivals in this course, providing a diverse look at a format that holds an important space in the film industry.

The course seeks to use FLEFF as a vehicle for students to apply and experience topics discussed in class, Utterson said.

“That’s the really dynamic and innovative part of this course, that it blends what we call experiential learning,” Utterson said. “So learning by being immersed in an experience, with some wider contexts and wider history.”

The course is open to Ithaca College students of all majors, and the capacity of the class increased from 50 to 75 because of high demand. Utterson stressed that both FLEFF and the History of Film Festivals class are open to the entire community.

“That’s an important part of this film festival itself,” Utterson said. “It’s a community event that we all participate [in], that this is a shared experience, and that it’s brand new material that nobody has ever, in Ithaca, had a chance to see and to hear and to think about and to discuss.”

By opening the class up to all majors and all years, Utterson said he hopes the course will bring in multiple perspectives and introduce a variety of students to the format of a film festival.

“[Film festivals] provide a space for people to think through these ideas that they wouldn’t typically have,” Schaff said. “I’m always pleasantly happy when students come from an event and they’re just shocked that this is what a festival is, that they’re asked to think through and interact with people at various levels.”

“It’s really the way that filmmakers can gauge interest for their films,” Bossard said. “It’s really for, you know, sort of non-tentpole, major commercial films. Film festivals are, in many ways, in many cases, the only way that a film is going to get attention that it needs to find greater audiences.”

Every year, the Finger Lakes Environmental Film Festival adopts a theme and Spring 2023’s theme is “polyphonies,” which is a term that usually applies to music, meaning a combination of different parts. The co-teaching format of the class with three professors is a coincidental reflection of FLEFF’s “polyphony” theme this year.

“We have three completely different perspectives in terms of the professors, and we will interface with one another,” Utterson said. “It works nicely in terms of the theme of the festival, ‘polyphonies,’ but it’s also really designed to bring three different perspectives to the world of film festivals, two different professors at two different colleges and the expertise of Brett Bossard who recently joined us at Ithaca College and who comes from the role of executive director of Cinemapolis.”

Bossard, as the former executive director of Cinemapolis, offers behind-the-scenes expertise about what it is like running and managing a film festival, Utterson said.

“Brett Bossard has really exceptional knowledge of some of the more industry focused debates in thinking about how festivals run,” Utterson said. “The work of distribution, the work of exhibition, how films circulate within the international markets, how films move from film festivals across the globe into particular cinemas, but also more local festivals and the audiences, publics and communities that will get to see them.”

Bossard, a Park school alum, worked for nine years as the executive director of Cinemapolis and uses his first-hand experience and network of connections to inform his teaching.

“Having spent nine years in Cinemapolis, I developed a pretty, you know, strong network of friends and colleagues in the industry,” Bossard said. “I’m just really excited to connect those people who really know the ins and outs of this world with … students who are going to be, you know, enrolled in this class.”

FLEFF 2023 will be taking place from March 20 to April 9 on both the Ithaca College campus and other venues like Cinemapolis.