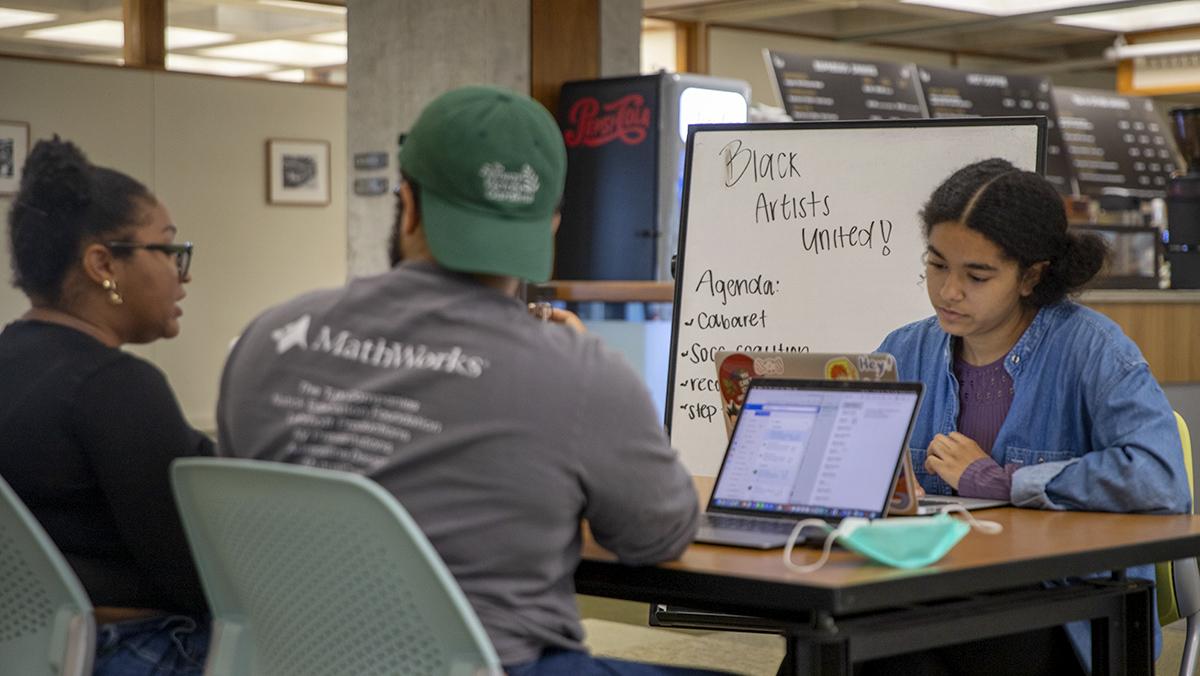 The second, HTC, focuses on providing a space for Black, Indigenous and People of Color (BIPOC) students to perform, produce and write shows. While sharing many of the same goals as BAU, HTC started in Fall 2022 and is more centered around theater performance, while BAU acts more as a general affinity group for Black artists.

Both groups emerged after increasing racial tensions in the college’s theater programs during the 2019–20 academic year. Following an incident where a professor asked students to write the N-word and other racial slurs on a whiteboard, a group of students set up a display in the Dillingham Center titled “A Manifesto of Visibility,” which detailed examples of microaggressions and racially charged incidents occurring in Dillingham. BAU formed partly as a direct response to these events.

“Part of our charge, and part of what we came out of as an organization, is the need to organize structural empowerment for Black students in Dillingham and make sure that there are affinity spaces, educational spaces, spaces where you can just kind of, like, take a load off, chill, … because it can be very intense,” junior Achille Vann Ricca, co-president of BAU, said.

Co-founder Jessica Brock ’22 said BAU is also a resource for Black students to confide in each other, share experiences and offer advice on how to solve pressing issues.

“There would just be, like, such a trusting space there,” Brock said. “Whatever I said in that space, people would have my back, they would stick up for me, and they would give me sage advice.”

BAU was founded at Ithaca College and is still exclusive to the college, but the group is attempting to expand nationwide so that every college with a well-established theater program will have a BAU chapter, Brock said.

“I am hoping within the next five to 10 years, I would have the board presence to really spread [our] message nationally,” Brock said. “That way we can do huge gatherings in different cities, and when we get into the industry, we have safe spaces to connect when we go on Broadway and regional theater, film, television, things like that.”

Similarly to BAU, HTC was born out of a need for an exclusive space. The group was created after co-founders senior Cris Rabines and junior Olivia Celenza discussed their experiences participating in extracurricular theater productions done through clubs on campus.

“Especially since this is very much a predominantly white institution, you have strange experiences working with non-[people of color] sometimes,” Rabines said.

Celenza said HTC wants to create a safe and welcoming environment for BIPOC students involved in the theater world.

“I remember sometimes I would come home, like, you know, crying because I had a really rough day, … but I could always turn to my [people of color] friends to help me get through it,” Celenza said. “They were the ones that really understood.”

HTC’s first official meeting happened Sept. 17, where students met on the red carpet at the entrance of Dillingham to do a read through of the script for “Spiderman: Into the Spider-Verse.” The group is currently planning Halloween related script-reading events in October, as well as their first full production in the spring.

In June 2020, a group of BIPOC theatermakers published an open letter titled “We See You, White American Theater.” The letter addressed continuing white supremacy and racism in the United States theater and has since reached more than 100K signatures.

“We See You, White American Theater” touches on the lack of BIPOC roles by playwrights, the lack of funding to BIPOC theaters and the overworking and emotional abuse afflicted upon BIPOC theatermakers, all while using BIPOC people as tools for promotion in order to seem more diverse and inclusive.

It has been more than two years since “A Manifesto of Visibility” was displayed in Dillingham, and even though an email sent out Jan. 17, 2020, by La Jerne Cornish, then-provost and senior vice president for academic affairs and current president of Ithaca College, and Rosanna Ferro, former vice president of student affairs and campus life, detailed how the college would move to correct these grievances, some students have yet to witness any meaningful change.

“We still deal with it to this day where, as seniors, we now had the sophomores and freshmen coming up to us and being like, ‘hey, let’s talk because this is happening,’ and we’re like, ‘oh yeah, he did that too, they did the same thing to us, like literally a year ago.’ And the cycle continues,” senior Naandi Jamison, secretary of HTC, said.

Around four months after the manifesto was posted, classes were moved online because of the COVID-19 pandemic and attention was turned toward anti-racism workshops over Zoom. After COVID-19 shut down in-person classes, some students, like Jamison, worried that their calls for diversity had been brushed to the side.

Senior Alaysia Duncan, BAU’s social media coordinator, said the issues brought up by the Manifesto are rarely addressed ever since students returned to campus.

“There was never really a consensus on the issue. It was just kind of like, ‘oh, we’re back for the spring,’ and then we got sent home and then we never really talked about it again,” Duncan said.

BAU is committed to enforcing change at the college according to the group’s constitution on IC Engage. The group is also affiliated with the Ujima Black Student Union at Ithaca College and the Musicians of Color Association.

“It’s all about fully committing to your BIPOC community and saying: ‘Hey, we see you, we appreciate you and we know what you bring to the table,’” Celenza said. “If your actions don’t equal what you say, then nothing holds weight, there’s nothing there.”

The members of the executive board for both BAU and HTC said they seek to bolster minority groups at the college and provide both a space for relief as well as a force for change in the community, holding the college accountable for how BIPOC students are treated.

“We’re not just there for your stock photos, for your posters, for your website. We are human beings,” Rabines said. “We are here to learn. We chose this place for a reason. Show us that you support us maybe instead of just framing us and throwing us up on the wall like we’re some piece of art, like we don’t have feelings and motivations and aspirations.”

Review: Prince of Darkness solidifies himself as a legend