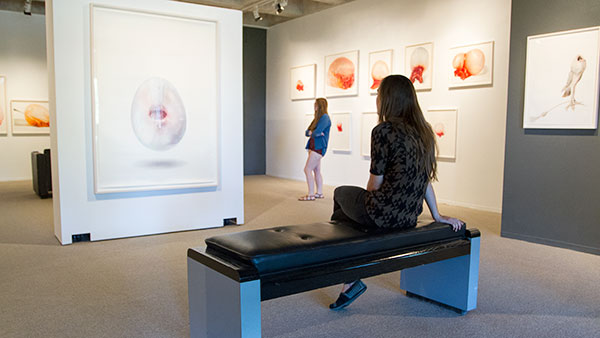 Equal parts alluring and surreal with a flair for the dramatic, artist Julia Randall’s newest exhibit, “Oral Fixations,” will be on display Aug. 25–Sept. 26 at Ithaca College’s Handwerker Gallery. The exhibition is inspired in part by Sigmund Freud’s studies on the subject, but it takes its own spin with anamorphic birds that have mouths and sexualized bubble gum drawn in colored pencil in order to explore various manifestations of the human mouth.

Though alluring and sometimes slightly disturbing, Randall said her artwork in “Oral Fixations” is mostly connected by a desire to capture the beauty of fleeting or otherwise forgotten moments. One series in the exhibit, titled “Lick Line,” features mouths making spit bubbles, some shaped like flower blossoms or other colorful imagery. With this image as well as most others in the exhibit, she uses hyperrealism, an artistic technique that exaggerates reality while maintaining extreme realism, in order to exemplify each fleeting moment.

“It changes the speed in which you would be able to perceive something,” Randall said. “The mouth and tongue, we see them all the time, but the way I’m choosing to draw them presents that very ordinary and public object in a very private and voyeuristic way.”

Typically, the art of drawing falls into two categories: printmaking, which uses a series of drawn and stenciled images layered on top of one another, or freehand, a more technical form that uses a singular image. Many artists, like Randall, choose to draw freehand, favoring the stylistic minimalism. With Randall’s vibrant, highly focused drawing style, the singular image can have a more engaging impact on the viewer, resulting in many different perspectives.

“Many would say the exhibit is a nod to Freud but in a more visceral way,” Baldwin said. “The imagery itself exists somewhere between sensual and alarming, or humorous and disturbing.”

Another theme of the exhibit deals primarily with fixation on breath as an ever-changing life source, represented abstractly by the bubble gum bubbles in the series “Blown” and the images of speech in the series “Lure.”

Randall said this exploration into the actions of the mouth can further reveal the nature of life.

“The gum is at various stages of inflation and deflation, and in a group what you start to see is the manifestation of actual breathing,” Randall said. “To me, that starts to talk to the brevity and evanescence of life and mortality.”

Within the last 50 years, art has taken on many new forms through the use of new technology, which Randall said can often be a hindrance to artists of a more traditional craft. However, she said working as an art professor has helped to give her a more open-minded outlook on art and newer media.

For the first time in any of Randall’s exhibits, she is using video to display her images. Clare Rogan, curator of the Davidson Art Center at Wesleyan University and curator of “Oral Fixations,” said she is delighted by Randall’s artistic progression.

“Julia told me about her new, exciting venture into video, and I thought it would be a great addition to the exhibition,” Rogan said. “Watching as Julia’s work evolved in new directions in the course of the two years we worked on the exhibition has been a great privilege.”

Still, Randall said she is continuously working on hybridizing her work with new forms of technology to represent her growing interest in the representation of time change, but there is a challenge in crossing over into video.

“Animation is something that I’m playing with right now,” Randall said. “I’m learning from the ground up, but it’s like speaking a new language, combining what technology can do for me versus what can my hand do for me.”

Despite all the years of work and experimentation on the artwork in “Oral Fixations,” Randall said she is glad to be able to divorce herself more from the artwork in order to let it become more objective.

“Sometimes with art, we tend to get hung up on the intention of the artist,” Randall said. “But ultimately these things stand on their own, and I’m really happy about that. Once it’s finished, the artwork can have a life of its own.”