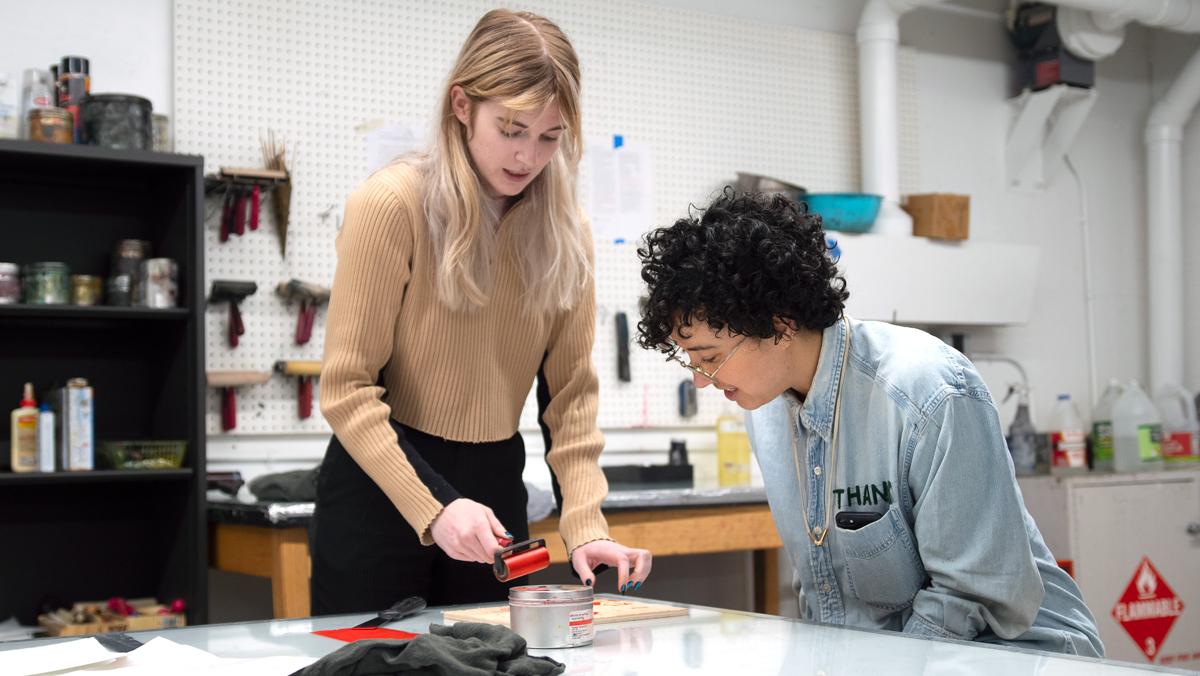 Political movements call for change through protests, speeches or executive action from national leaders. But in the Ithaca College class Introduction to Print Media, art is a medium for social justice.

The class is taught by Paloma Barhaugh-Bordas, assistant professor in the Department of Art. The class meets on Tuesdays and Thursdays from 1:10 to 3:40 p.m. in the Ceracche Center. Barhaugh-Bordas said the class rotates among research, carving and printing days.

On printing days, the extended class time allows students to roll out their ink, test the registration of their print and soak their paper. Before those steps, however, students dedicate their time to brainstorming and researching the topics they will draw, carve and print.

Freshman Sam Khoo Wien said that because of Barhaugh-Bordas’ teaching style, the class is well structured.

“As someone with [attention deficit disorder], my mind is all over the place,” he said. “So today, she was helping me really narrow down where I was going with my project and what I really wanted to say. I think that’s something that I really haven’t experienced with a professor before.”

Khoo Wien shaped his first project for the class around a political statement. Spurred by the recent impeachment hearings against President Donald Trump, Khoo Wien printed an image reminiscent of a leaflet that U.S. troops drop over battlegrounds during the Afghanistan War. On the leaflets, the poster read “We are watching!” in Arabic and targeted the Taliban. Next to the words, a black-and-white image showed former Taliban leader Mullah Mohammed Omar in a set of crosshairs.

Khoo Wien’s print does not feature a specific person in the crosshairs but rather a silhouette. Underneath the targeted figure is the phrase “Where are the witnesses?” The cherry red image and accompanying phrase are printed multiple times across a large, white poster board.

“With the impeachment hearings, it was really powerful to me how there were no witnesses, and it was stirring a storm in me,” he said. “People talk about it, and they’re … disappointed, but I feel like there should be people in the streets. There should be people really upset about it. But hey, I guess I’ll just make some art.”

Following an afternoon of brainstorming for the students’ current projects, Barhaugh-Bordas broadcast a print onto the classroom’s whiteboard with a message in yellow capital letters: “Boycott Grapes.” The decades-old print was a call to action from the United Farm Workers Union (UFW), led by Cesar Chavez and composed of Mexican American workers. In the 1960s and 70s, the UFW urged consumers to stop buying grapes because farmworkers in California made as little as $0.90 per hour, plus $0.10 per basket collected.

The “Boycott Grapes” print was created by Xavier Viramontes, and the unconventional slogan and striking design became emblematic of the UFW campaign. Barhaugh-Bordas said the iconographic and symmetrical nature of Viramontes’ print is the source of the artwork’s power.

Barhaugh-Bordas said that when she lived in San Francisco, she studied with Viramontes at the City College of San Francisco Fort Mason Center for Arts and Culture. At the time, she was choosing whether or not to moonlight as an artist. The semester was $90, and Viramontes’ class allowed her six hours of work time per week.

“[Viramontes] led [the class] with an incredibly patient approach,” she said. “ I think that’s a lesson that I embrace from a lot of my teachers, … that [printmaking] is a space that, while politics enters into media a lot, … we encourage exploring and explaining your ideas through your imagery and doing that in a way that is hopefully really moving and powerful.”

After the initial drawing, students carve the negative space of their sketches out of woodblocks, a typical medium used in the class. These carvings are printed on top of each other, usually on separate days to keep the layers polished.

For his project, sophomore Sebastian Chavez is exploring the roots of the Chicano art and culture movement, which originated in the Southwest of the United States. The movement began in the 1960s when Latino students fought for better education and health care after immigrating from Mexico.

Chavez is using an eagle, which is a symbol of unity on the Chicano front, in his print, but he chose to draw it upside down to portray the loss of identity he said Latinos have experienced in the United States. Growing up from the bottom of the eagle are branches and cacti that represent the Chicanos’ ancestral foundations.

“The Chicano movement is not the same because we are [in] a new era,” he said. “That’s why it grows out into cactuses or branches where we’re expressing ourselves, but the foundation of it is the Chicano movement. We tend to forget who came before us and how [we can] learn from them and how people mobilize.”

Chavez is a politics major with a minor in Latino/a studies. He said he chose to take the printmaking course because of the medium’s close connection to his major.

“Printmaking [has] a very important role through political movements,” Chavez said. “Some of the most famous campaigns, … banners, protest posters have printmaking in them. … It’s amazing to see how much people can put their effort … into [an] art piece to make a statement of how … they endure on the day-to-day basis.”

Artists have famously turned political statements into art pieces. Pablo Picasso’s “Guernica” was a swift reaction to the bombing of Guernica, a Basque town in Spain, by the Nazis. It is regarded as a biting representation of the physical toll war takes on innocent individuals. Banksy, a currently anonymous, England-based street artist, forges graffiti on the corners of streets and backs of buildings. The artwork is often critical of social media, excessive violence and political or social corruption.

Barhaugh-Bordas said she was impressed with students’ focus on their projects. While the process is slow, steady and will usually progress over a few days, she said she hopes students can leave the class with new skills.

“My interest is more in students figuring out what it is that really interests them and pursuing it,” she said. “I think art is a space where you really get to invent and are asked to generate your own ideas [and] pursue what it is that is meaningful to you, personally, every day.”