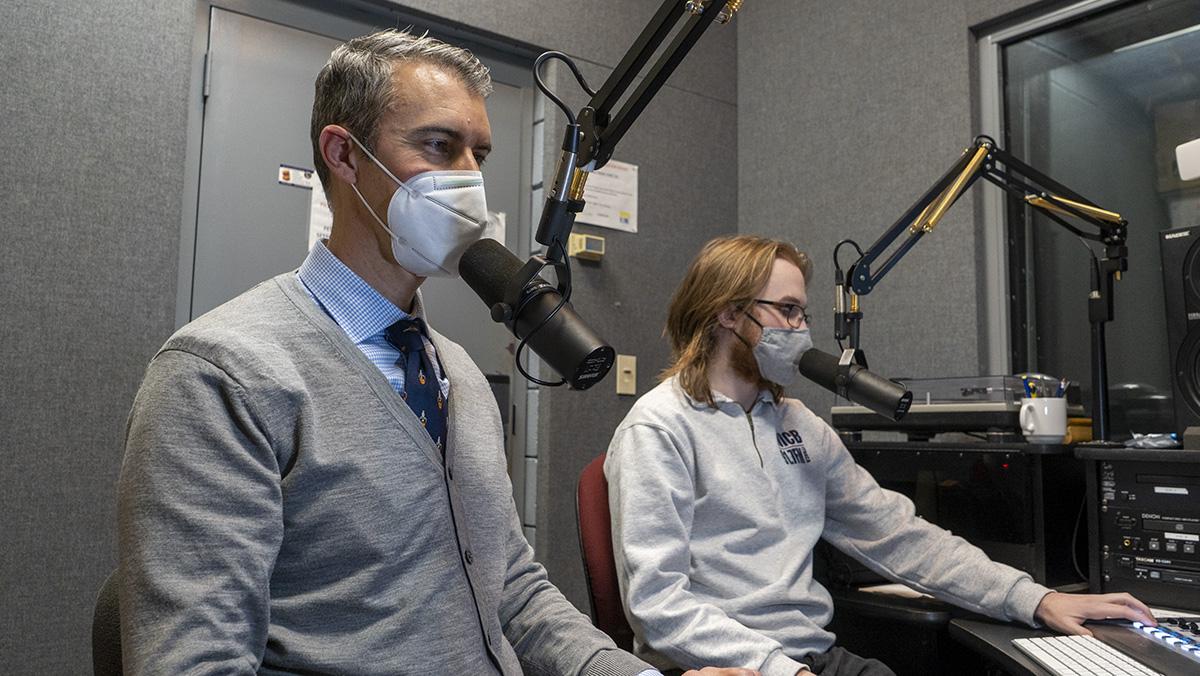 Chris Holmes, associate professor and chair of the Department of Literatures in English, recently appeared as a guest speaker on a podcast titled Novel Dialogue.

The podcast was created by John Plotz, professor of humanities at Brandeis University, as well as Aarthi Vadde, associate professor of English at Duke University. Plotz and Vadde created the podcast for the Society for Novel Studies, an international academic organization of people who study and discuss the novel.

Currently in its third season, Novel Dialogue invites a novelist and a literary critic to analyze novels from the perspectives of readers, the author themselves, publishers and others. Podcast episodes run for 40 minutes to an hour, and aim to engage lively, fun and sophisticated conversations that examine novel writing and consider the influence of characters, plots and stories on how people think about the world.

Additionally, junior Connor Hibbard, a television-radio major, will be the audio editor for Novel Dialogue in Fall 2022. Holmes himself recommended Hibbard for the position.

Novel Dialogue can be listened to on Apple Podcast, Spotify and Stitcher.

Staff writer Jaydn Davis spoke with Holmes regarding his involvement in the podcast.

Jadyn Davis: How did you get involved with Novel Dialogue?

Chris Holmes: I created a podcast called Burned by Books during lockdown, and it was a literary interview podcast. An academic who is one of the founders of the Novel Dialogue, Aarthi Vadde, reached out to me and asked if I would be interested in becoming a guest host. At that point, I’ve done probably 30 or 40 episodes of my own podcast, so at that point it made sense to me that I knew enough about my own podcast to come on board.

… Novel Dialogue is a pretty unique podcast, because it features a host and a critic in conversation with a novelist… I just posted the episode that I’m hosting for this season, which is with Damon Galgut, who won the Booker Prize this year. He’s a South African writer.

JD: Who has been your favorite guest that you either interviewed or listened to?

CH:​​ Before I was a guest host, there was an interview with Jennifer Egan. She is a Pulitzer Prize–winning novelist, and I thought she was amazing. Obviously the episode that I just did with Damon Galgut is one of my favorites as well, because he is one of my favorite South African writers.

JD: As a guest host, what is your job at the podcast?

CH: So my job as guest host is to work with the featured critic ahead of time, and come up with a set of questions to ask the novelist. I then ask follow–up questions and basically keep the conversational flow, so I’m sort of like a director as much as I’m a part of the interview. After the interview, I became part of the editorial process.

JD: Could you walk us through the editorial process?

CH: The main editor, who will soon be Connor, will send me an initial sound edit of the recording, and I’d go through and listen and make cuts to content that we could get rid of, or content I didn’t think needed to be there. I’d find funny vocal takes or moments with background noise, and I’d give those notes to the editor. Then, multiple people listen and make cuts to get the episode down to around 40 minutes.

JD: Why did you recommend the job of audio editor to Connor?

CH: I really admire Connor’s multiple podcasts, and they were a good model to me regarding how to do a compact, discussion-based show.

JD: What has been the best part of working on Novel Dialogue?

CH: A whole team is working on every episode. That’s so different from my own podcast, where I do everything and all of the work that I do is my own fault or problem. Working with a group is really fun, so just being a part of that team feels like a really satisfying part of my job now.