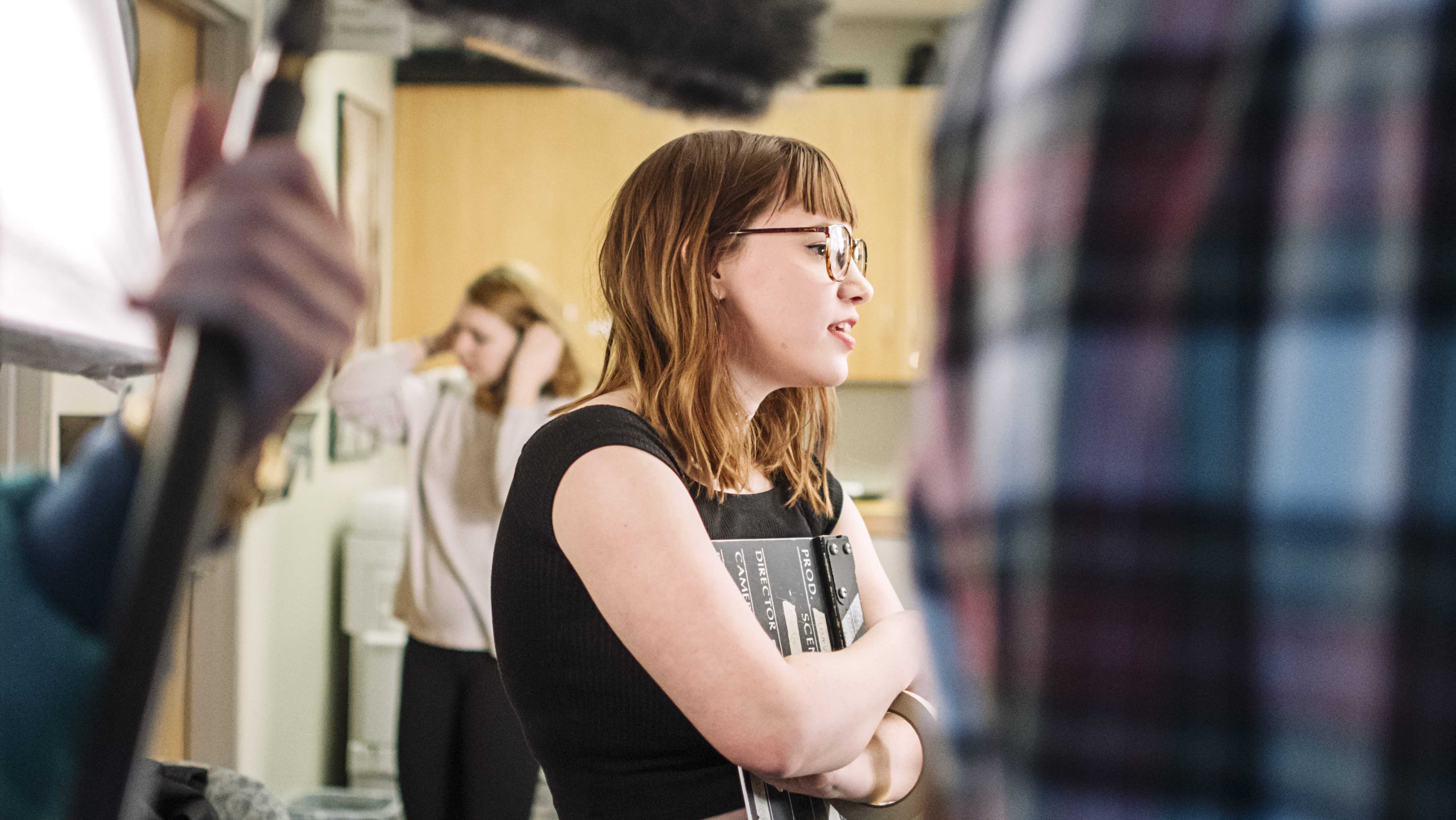 Kristen Harrison/The Ithacan
Junior Alex Coburn directed a film for her Advanced Cinema Production: Fiction Film class in March 2018. The film, “Love is For Suckers,” was a dark coming-of-age comedy about vampires. The paper she's about to have published discusses a Czech New Wave film that expresses feminism through a story about vampires.
By Matilde Bechet
Published: February 4, 2019

During Communist rule in the Czech Republic, movie creators had to get creative when expressing their critiques of the regime through their art. Two Czech filmmakers, Ester Krumbachová and Jaromil Jireš, were able to get their feminist messages across with a peculiar main character: vampires.

Alex Coburn, a junior cinema and photography major with a concentration in cinema production and a minor in English, wrote a paper discussing this topic, focusing particularly on one film, “Valerie and Her Week of Wonders.” This paper, titled “Valerie the Vampire Slayer: Abjection, Czech New Wave, and Feminist Interventions,” highlights the feminist messages in the film and will be featured in the magazine “Film Matters.”

After submitting her essay, Coburn was selected to attend the Society For Cinema and Media Studies conference in Canada and present her paper. Later, Coburn decided to submit her work to the magazine. Coburn was helped throughout the process by Matt Holtmeier, a former Ithaca College professor.

Staff writer Matilde Bechet spoke to Coburn about why she chose to write about a Czech Republic film, how she came across her idea, who guided her through this process and how she hopes her paper will make an impact on film students when it is published in September 2019.

Matilde Bechet: Could you explain what your paper is about?

Alex Coburn: It’s about this film that was made in the 1960s in what was then Czechoslovakia and now, Czech Republic of Slovakia. It was basically a Czechoslovakia film that was made in kind of a surrealist style at the time. It was this vampire movie about this girl who was sort of stalked by these vampires. … I noticed that people were talking about it in the context of being made in this specific film movement that was happening in the Czech Republic at the time that was called the Czech New Wave, but they weren’t talking about it as a piece of feminist text. … My paper is essentially revisiting this random Czech film and sort of talking about it as a feminist text and the ways it influenced feminist horror on a larger scale.

MB: How did you discover the film, “Valerie and Her Week of Wonders”?

AC: The first time I saw the film was when I was 16. I actually didn’t stumble across it by myself, I was watching it with … someone I knew [and they said,] ‘This is a film I’ve heard about it and it’s a cult classic. We should watch [it].’ So I ended up watching it. … I remember it just really resonated with me, even as a 16 year old. When I was 16, I hadn’t studied film analysis yet. I really had no grasp of the language I would use now to describe this film, but, at the time, I just remember thinking, ‘Woah, this is so girl power and badass. … I just remember thinking it was like nothing I’ve ever seen, and, obviously, it stuck with me for four years after that. It’s just something I’ve been thinking about for a really long time, so when my professor asked me if I wanted to submit to this conference, … I immediately was like, ‘I wanna write about this film.’

MB: Could you explain the film’s storyline?

AC: The whole movie is on YouTube, so I would recommend it. Basically, the film was based on a novel and then adapted. … It was directed by Jaromil Jires. He was a Czech New Wave director, and it was written by a woman, Ester Krumbachová. It’s about a 13-year-old girl who gets her period and then vampires start stalking her. It’s not even subtly feminist. It’s very explicitly feminist, and the visuals are very surreal and interesting, so I think people are distracted by that. They don’t like to think about the broader message of the film. Essentially, this 13-year-old girl uses her power as a woman … to fight those vampires and defeat them.

MB: What was the Czech New Wave, and why is it a significant element in your paper?

AC: Essentially, the Czech New Wave was a film movement that started in the 60s. At the time, they were under a communist government, and so, a lot of their films were censored. The Czech New Wave was really concerned with making films that explicitly critiqued the Communist regime of the time. But a lot of them would get banned … because they were criticizing the government. Some filmmakers, like the man who directed the film I wrote about, would use horror or surrealism to sort of hide their message so the government wouldn’t notice that it was explicitly critical of it.

MB: Could you describe the process that led you to partake in the Society For Cinema and Media Studies conference held in Canada?

AC: I applied to this conference, I think, in January. I was working with a professor at the time on a proposal for the conference, … I was sort of doing it as independent study. … I think in February, I heard back that I had been accepted into the conference and was being invited to speak. … I was the youngest, I think I was 20 at the time, and people were, like, 26 attending. … I got to present, and it was cool, and what I presented at the conference was what turned into the paper that I submitted to the film journal.

MB: How did you react to the news that your paper was going to be published in the magazine “Film Matters?”

AC: I was really excited about it especially just because it’s really, really rare for people to have published research as undergrads. … I just didn’t know many people at Ithaca who had done that, so … I had to kind of figure it out as I went along. … I was obviously really lucky to have guidance … by working with a professor. … I wasn’t doing it by myself entirely. … I remember, I got home, and this email popped up on my phone and it didn’t say ‘Congratulations,’ … so I opened it expecting to be disappointed, but it was like, ‘We’re publishing your paper, here’s all the stuff you need to send us.’ … There’s almost nothing about Valerie the Vampire Slayer as a feminist text, so knowing that my work is actually bringing something very new to the table, … I think it’s really an amazing feeling for sure.

MB: How do you think your paper will make an impact on film students?

AC: I’m hoping that it inspires people to look back at films that were made about or by women. … Looking back at films that people might not have thought of as feminist at the time but sort of locating the feminist resistance in these films, I think is really important. … Also, just because I think that Ithaca College definitely is very production-heavy in terms of the film major and I’m hoping maybe seeing a student who pursued a film analysis will inspire other people to feel like they can do it too.

MB: Do you know when the magazine will be releasing your work?

AC: I believe the issue that my article is featured in is September 2019. The beginning of my senior fall semester will be when the article I started working on sophomore fall semester actually comes out.