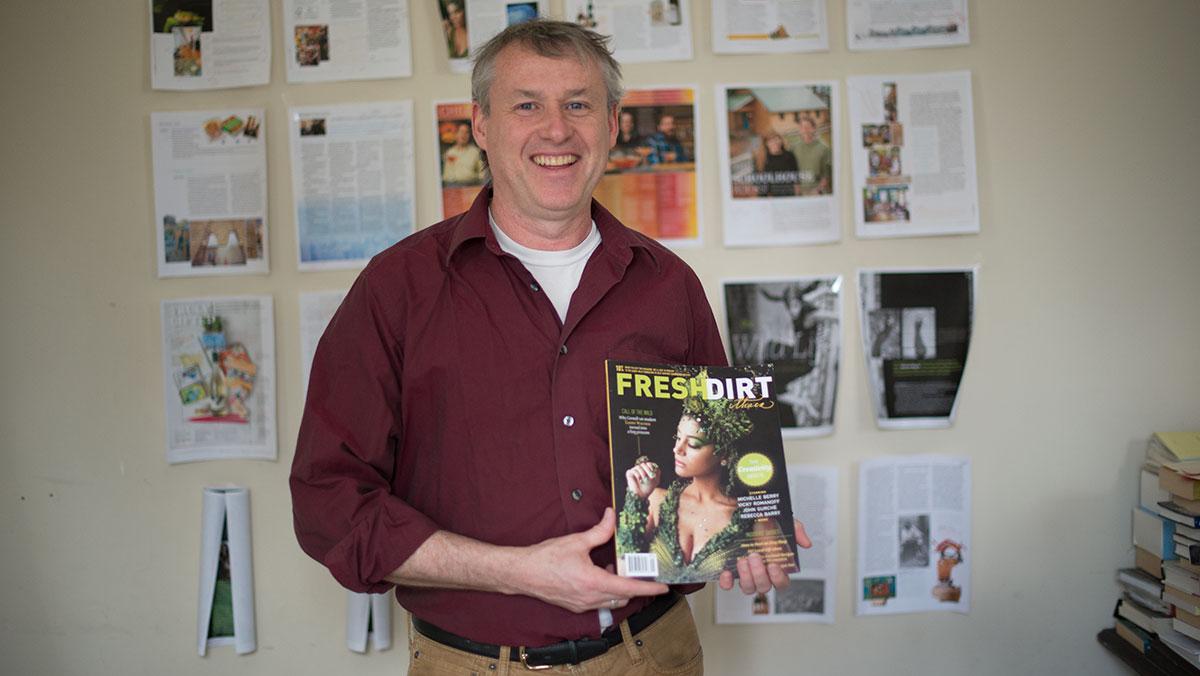 Fresh Dirt is an Ithaca-based, green-living magazine that informs its readers of ways they can live a sustainable life. Tommy Dunne, the editor-in-chief and publisher of the magazine, previously taught the course Social Entrepreneurship in Action at Ithaca College from 2010–11 in order to kick off the magazine. Since then, Dunne has produced multiple issues of the magazine, which is published quarterly. The latest issue, released at the end of 2014, was dubbed “The Creativity Issue” and can be found at businesses including GreenStar, Home Green Home, the Piggery and Barnes & Noble.

Staff Writer Ashley Wolf spoke to Dunne about his motivation for starting the magazine, the magazine’s publishing process and his hopes of incorporating the college’s students into the magazine.

Ashley Wolf: Why did you want to start a magazine on sustainable living?

Tommy Dunne: I had started [working with] the environmental issues and sustainable living [when they] were very fringe back then [in 2010], but I thought there was no great magazine to cover those issues. Organic Style was one of the first and my wife used to work for them, but they sold it and the magazine called Plenty came around, and that lasted a few years. I just felt it was time that a magazine for sustainable living could work.

AW: What was your main goal for the magazine?

TD: My original goal was to make a national magazine so that green living would be more mainstream and less fringe, and of course in Ithaca it is more mainstream than fringe, but the rest of the country hasn’t really gotten close to that. I’ve had that idea for a long time, to start a green living magazine, and I put a business plan together for a national version of it, but I finished that right as the economy tanked and magazines are folding left and right. There was no way I was going to try and raise millions of dollars to start a magazine in that climate. So, I put it aside and then I started working in [marketing and communications] at Ithaca College.

AW: How did Ithaca College play a role in the creation of Fresh Dirt?

AW: Why did you want to start the class?

TD: I was looking to get journalism students and photographers from the Park School and designers, business students to help with the business plan and the marketing plan and advertisement sales, Health Science and Human Performance students because we want articles focused on health and healthy living and nutrition and then students from really anything. We had a lot of kids from the writing department and the School of Humanities and Sciences … I proposed it, it got accepted. I found Nick Kowalczyk, who’s still a writing professor, to co-teach it with me, and we did it the spring of 2011 and the first issue came out that fall.

AW: Do you still have students from the college working on your magazine?

TD: We have always had some Ithaca College students involved in each magazine issue … I would like to get students more involved. I really enjoyed teaching the class, but I don’t know if a class was the right way to continue student involvement. I had some conversations with Dean Diane Gayeski early on about how we could do it, and she thought it could be a good extramural, but we haven’t figured out how exactly we should go forward with it.

AW: How do you find stories to cover?

TD: We do have people who email us on our website, that contact us for story ideas, but we’re so involved and know other people who are so involved that we can see what’s new and what’s going on and do it that way.

AW: Why do you think this is an important issue to cover in a magazine?

AW: Where do you think this magazine will go in the future?

TD: We were hoping to be a quarterly, but we’re not a money-maker at this point … Lately, it’s been a year from the past issue to this current issue. We’re hoping right now to do two a year, and I’m also looking to revisit the national model because I think the economy has improved enough and people are aware enough. I think it’s a better climate to start asking for investment for it.