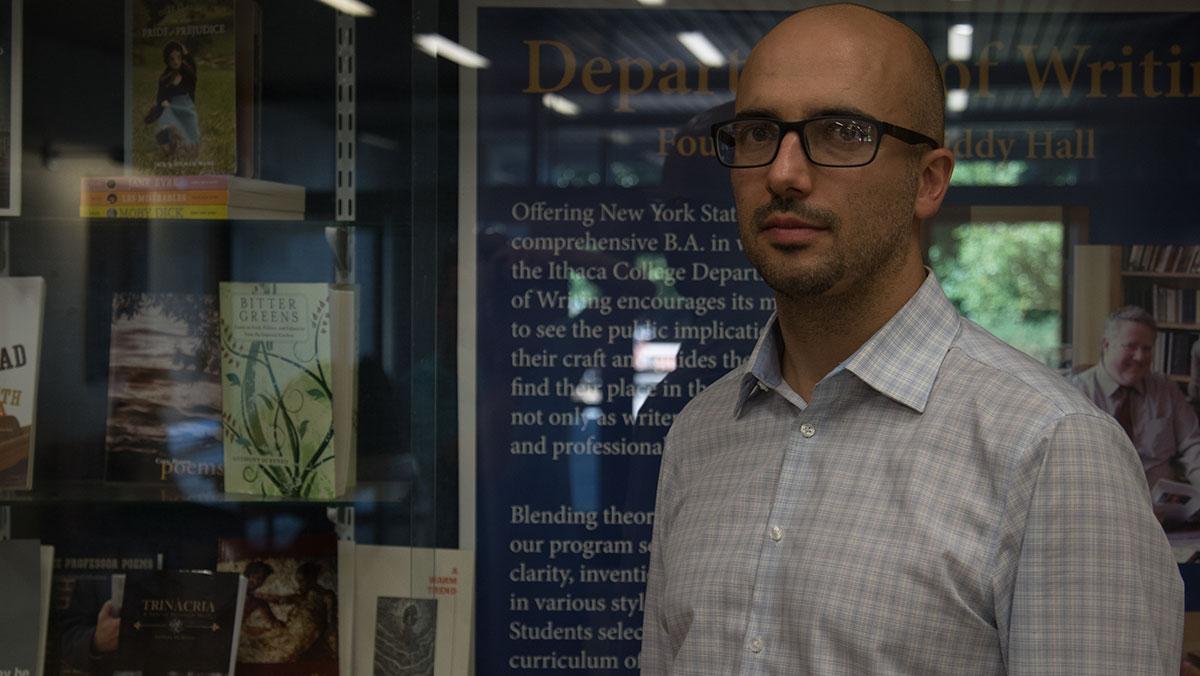 Alex Posen/The Ithacan
Gabriel Urza stands in front of the display case where his new novel, "All That Followed," is displayed.
By Matthew Radulski — Staff Writer
Published: September 15, 2015

For five years, Gabriel Urza, assistant professor of writing at Ithaca College, worked as a trial lawyer in Reno, Nevada. Then he got married, moved to Ithaca and had his first novel, “All That Followed,” published, all within the span of the past few months. The book chronicles a group of people in Spain as they experience a political assassination, and it is receiving rave reviews from the likes of The New York Times Book Review, NPR and Publishers Weekly. In fact, Publishers Weekly named “All That Followed” one of the Best Summer Books of 2015, and Urza himself one of its Writers To Watch for Fall 2015.

Staff Writer Matthew Radulski spoke with Urza about his move to Ithaca, his first weeks at the college and the publication of his first novel.

Matthew Radulski: Your first novel was published a month before you started teaching at the college. That is a lot to occur all at once.

Gabriel Urza: That is just the beginning of all the stuff. I actually moved from Reno in June. I also got married in July and moved out here in July, and am now starting at a new job. In the spring before that, I was working as a criminal defense attorney and had two murder trials. All those things are a lot to take in, but for the most part it’s good stuff. I always do better when I’m busy, anyway. I’m looking forward to getting into a bit more of a writing routine.

MR: What actually brought you to Ithaca?

GU: Well, I came here to teach at IC after I came out for a campus visit. I was really encouraged by what I saw with the writing program here. The staff here were really welcoming and were just top–notch writers. I knew it was a place that I would love to teach at. I was here at February, so I think I got a realistic view of what the town is like. We’ve been totally in love with Ithaca since we’ve arrived.

MR: How’s the teaching been?

GU: The students here have been great to work with. Even though it’s a lot of work for me to prepare for a class, at the end of the day I get to go and hang out with people who are interested in creative writing and talk about an essay or short story that I get to pick, so that’s pretty great.

MR: How long were you writing “All That Followed” before it actually got published?

GU: I started the novel in winter of 2010. By the time I had a workable draft that was ready to be sent out to agents and editors, that was probably 3 1/2 years. Then the process of placing it with an agent and an editor at a publishing house and a revising — it lasted for another year and a half. The actual editing was fine. It was actually really interesting — I learned a lot, and I think the book got a lot better.

MR: “All That Followed” got very good reviews. What does that mean to you?

GU: On the one hand, you can’t really expect your book to get reviewed at all, let alone to get a good review, so anytime the book got reviewed I got excited. I’m also totally human and I read the Times Book Review every day, so to see the book there, I felt like it meant that I had access to a level of recognition that I didn’t have before. I expected it to fundamentally change my life in some way. It definitely does not. At the end of the day, it brings up these bigger questions about why you write. It’s really important to ask yourself: “Why am I writing in the first place?” and “Do I want to keep writing if it doesn’t fundamentally change my life — if the results don’t fundamentally change my life?”

MR: The book takes place in Spain, before and during the 2004 Madrid train bombings. Were you in Spain at that time?

GU: I think I probably just needed some space from it. Sometimes you need the story to come for you. And the other thing also is that when I started out writing the novel, I didn’t have in my head that I wanted to write a novel about this specific act of political violence that the book is about. Instead, I really was thinking about the characters around it. For me, anyway, it’s hard to start a piece of creative writing with a simple idea, like somebody is kidnapped. Usually, I have to have a better sense of the characters involved before I really get moving.

GU: Yeah, absolutely fiction. The novel is sometimes advertised as being based on a true story, and there was a political kidnapping and killing that occurred at the time that serves as a jumping–off point for my novel. As far as any appearance of similarity between the people in the book and the people in real life, there are none. That was really important to me.