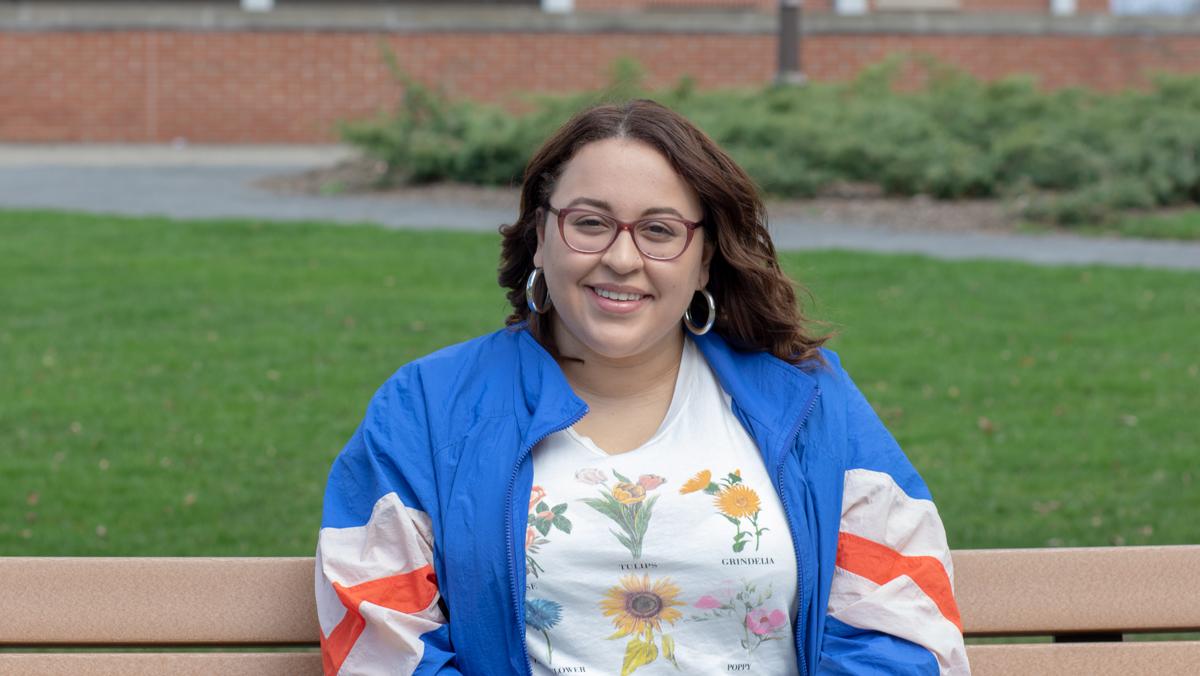 Jackie Marusiak/The Ithacan
Avery Santiago is one of the students being honored at this year's Rainbow Reception. The reception is in place to honor LGBT students and their hard work.
By Ashley Stalnecker — Staff writer
Published: April 9, 2019

As the semester comes to an end, members of the Class of 2019 at Ithaca College will be participating in several ceremonies, collecting their graduation regalia and preparing for graduation. LGBTQ students and their allies will gather for the annual Rainbow Reception on April 12 to receive their rainbow cords and shoals.

Luca Maurer, program director of the Center for LGBT Education, Outreach & Services, said the idea for the reception came from a student who wanted to honor and acknowledge the achievements of LGBTQ students.

“The Rainbow Reception is a cultural celebration of the incredible diversity and creativity and talent and drive and determination of LGBTQ communities,” Maurer said.

Maurer said the program has grown since it first started 17 years ago. At the first reception, he said, only six students chose to be recognized, but for the past few years, more than a hundred students have chosen to be honored.

“We don’t have more LGBTQ students on this campus then we did back then,” Maurer said. “We just have more who feel more confident and secure in being who they are and being out.”

Maurer said he has been organizing the reception since it first began. He said that in many ways, the climate toward celebrations of identity like this has changed to become more accepting. He said that when he first started the program, the planning committee spent a lot of time thinking about security for the ceremony and how to keep the focus on the students. He said it still takes time to plan for an emergency, but with a more accepting environment, that is less of an obstacle in the planning process.

Anyone who wants to participate and receive a cord can fill out the form to be recognized at the event and are not required to offer any other information such as their sexual orientation.

Elisabeth Nonas, associate professor in the Department of Media Arts, Sciences and Studies, said that over the last 16 years she has attended the ceremony, she has seen it grow.

“Well in some sense, it is consistently moving, emotional, honest,” Nonas said. “The biggest change is it’s just bigger and bigger, and now, it isn’t just undergraduates. We have Master’s and Ph.D.s who get cords.”

Nonas usually offers some closing remarks for the ceremony. Nonas has participated in every ceremony, usually emceeing the event, for the last 16 years.

Nonas said it is meaningful for her to participate because she is an out and proud member of the LGBTQ community at the college.

“It’s an opportunity to honor students who are able to articulate and honor their own identities,” Nonas said. “It’s just a really personal, emotional, moving experience, and I just love that students have an opportunity to stand up and say something if they want to, and they tell wonderful stories.”

In the past, three awards were given out at the ceremony in addition to awarding each student their graduation regalia, but Maurer got feedback from the community that he should reevaluate the awards. Students were awarded with either the Harvey Milk Award, the Sylvia Rivera Award or the LGBT Ally award for outstanding service or raised awareness for the LGBTQ community.

The awards will be on hold until the planning committee can receive more feedback. Maurer said the world has changed since the reception first started and rather than honoring people for going above and beyond to help serve LGBTQ students, that kind of behavior should be expected. However, each student will still be honored with their cord or shoal.

While ceremonies like the Rainbow Reception are held at colleges all over the country, Maurer said this ceremony is one of the only that provides “stand-in parents.” “Stand-in parents” are guests that come to cheer on students who may not be accepted by their own parents or who do not have their parents in attendance.

Maurer said the student who first proposed the idea of having a Rainbow Reception was disowned by his parents because of his identity. Maurer said he created the idea of “stand-in parents” to provide support for those who might have families that do not accept their identity. Through Parents and Friends of Lesbians and Gays (PFLAG), a national organization for families and allies of LGBTQ people, Maurer invited people to the ceremony as “stand-in parents.”

“That is a very special aspect of our program,” Maurer said. “Over the years, fewer and fewer students are in the position where nobody is there to support them, but their role has evolved as support parents.”

Two of the couples from the local PFLAG organization have come every year for the past 17 years. One family even moved away to a different state but still returns for the ceremony every year to cheer on the honorees.

“It’s incredible to me that they made that commitment 17 years ago and they have kept it,” Maurer said.

Senior Avery Santiago will be among the students being honored at the Rainbow Reception. Santiago said she appreciates the support system that comes together at this event and that she likes that the college offers “stand-in parents” to provide that support as well.

“You can just really feel the appreciation in the room,” Santiago said. “ It makes me happy to see students that identify within the LGBTQ community be acknowledged and to be honored for the great work they do on campus.”

Santiago will have her two best friends at college there to support her during what she describes as an emotional event. She said she is excited that the community is recognizing her and her peers.

“It makes me feel seen, acknowledged and heard,” Santiago said. “I’m looking forward to see my peers and myself be honored and embraced and to wrap up these long four years and to just be in a space where we are honored for our authenticity.”