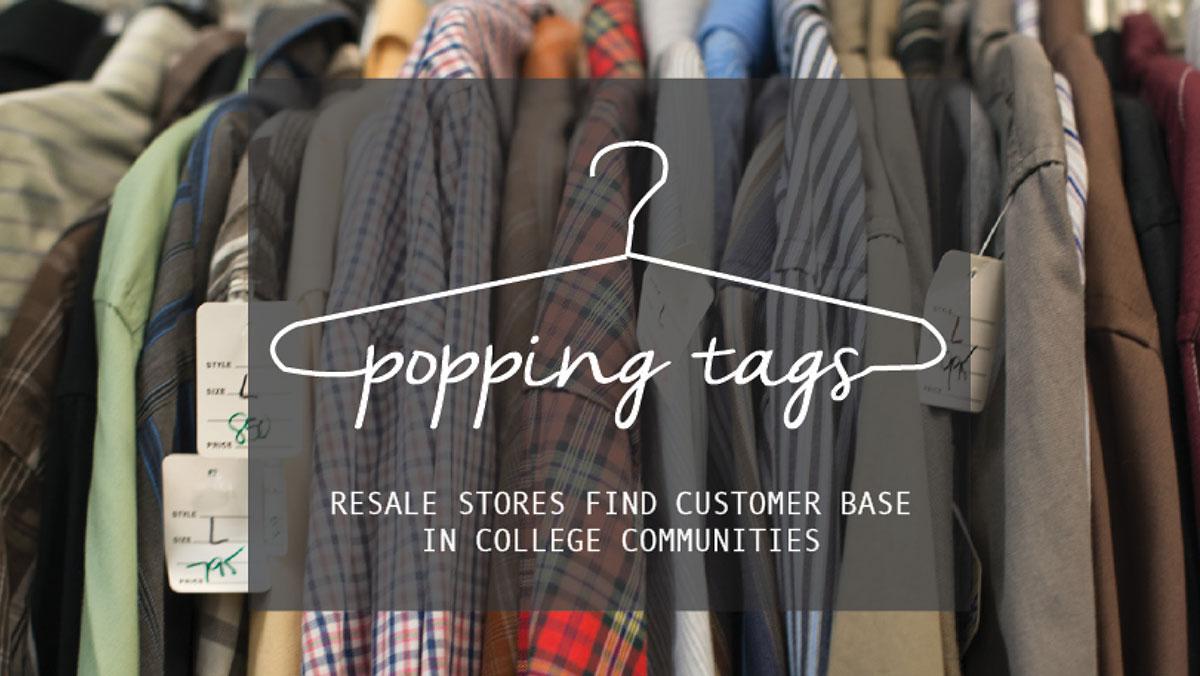 It had to be Grizabella, the “glamor cat” from the theater staple “Cats.” This was to be Bronwyn Bishop’s Halloween costume. The now-junior was in kindergarten when she decided on the feline getup, which spurred her mother, a theatrical costume designer and seasoned resale shopper, to bring Bishop to a thrift shop.

“This was the first time I had ever gone to one,” Bishop said. “It was The Salvation Army, and she bought me all this stuff. I was this crazy, glamorous girl, with cat makeup on. I was 5. It must have been crazy.”

As crazy as she found it then, her ventures into the world of resale were far from over. Bishop is just one of many who plunder resale stores — stores that buy and sell used clothing, often for greatly reduced prices. These stores have found a particular home in college communities, with the City of Ithaca alone boasting several, including Trader K’s, Plato’s Closet and Thrifty Shopper.

The definition of a “thrift store” is not so cut and dry: The National Association of Resale and Thrift Shops defines this realm of stores in a few ways. The association designates resale shops as any shop that buys its clothing directly from individual owners. This includes non-for-profit shops, such as The Salvation Army or Goodwill, which may receive their products through donations or from consignment — where owners of the clothing are paid a percentage if their items are sold. Finally, there are strictly consignment shops, which work on this consignment basis only.

Regardless of what one may call these used-clothing outlets, there’s one thing for sure: They can offer customers a mean bargain. For Bishop, who found herself flanked by designer brands during her time in private school, these stores offered a supreme cash-saving opportunity.

“I grew up going to private schools, and a lot of the girls had really fancy clothes, and we didn’t have a ton of money,” Bishop said. “So I would go thrifting for my fancy clothes, and I’d show up in a Prada sweater like, ‘I’m totally like you guys. Didn’t get this for $2, definitely not.’”

Bishop, who rarely finds herself without a piece of thrifted clothing, has stuck to these shops ever since, avoiding retail’s mighty price tags. Her bright blue, sequined cabaret dress, for instance, which dates back to the 1930s and came paired with its own jacket, is evidence of this.

Her cash-saving sentiments are echoed by junior Shawn Davis, another longtime frequenter of resale stores, with an admitted soft spot for vintage clothing. Davis most enjoys Ithaca’s own Petrune, a consignment store, and often haunts thrift stores when home from college. Davis said the items’ used status does not detract from the potential deals they offer.

“From my perspective, if you don’t look at it as a deal on … a used piece of clothing, and just look at it as what you’re spending for what you’re getting, objectively, it’s an awesome deal,” he said. “You can get bountiful sweaters for like 17 bucks.”

This collegiate love for a good deal is barely puzzling for the thrifty — college students are a famously broke population, and Bishop said their soul-searching tendencies often lead them to seek out new styles for cheap.

“We’re college students, so most of us are pretty broke,” Bishop said. “I think that college is definitely a time where people start expanding their horizons on what they want to wear, and they start putting together their personal style, and I just think that people really want to get into fashion, but they can’t really do that in a retail way.”

Bishop’s intuition may not be so far off. Executive Director of NARTS, Adele Meyer, said most shoppers, not just the student population, enjoy the excitement, sustainability and discounts of thrift shopping.

“People like to save money,” Meyer said. “They want to recycle. They love the thrill of the hunt. They like finding unusual things.” 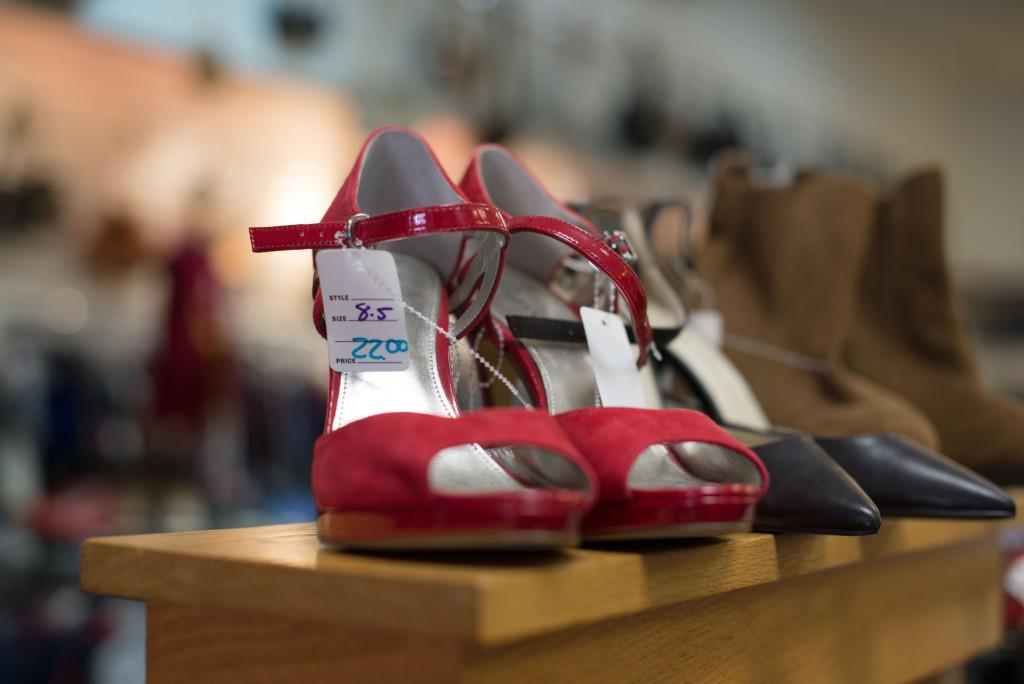 A pair of high heels stand on display inside Trader K’s, one of Ithaca’s many resale stores. Students have taken advantage of these stores’ deep discounts. TOMMY BATTISTELLI/THE ITHACAN

However, for some, the prospect of the thrift shop may elicit thoughts far removed from this discount-fueled appreciation. For Davis, his first brush with a resale store — shopping for a suit for a dance — was paired with a certain twinge of anxiety.

Davis’ reaction, he said, quickly faded. However, his sentiment is not rare among the thrift shop scene — to some, there is a perception that these shops indicate that an individual may be financially struggling, or simply “too poor” to afford full-price clothing. Stephen Sweet, associate professor and chair of the Department of Sociology, said the reaction is one founded in “conspicuous consumption”: a sociological theory that identifies a human tendency to relate status to an individual’s material possessions. Sweet said those who shop at resale stores defy this trend.

“Conspicuous consumption states that you show your status by what you consume,” Sweet said. “It’s not enough to have wealth. You have to have the right car, the right sweater, the right shoes, to show everybody what your status is. When you thrift shop, it’s sort of doing the opposite.”

Bishop said she often encountered this degree of distaste toward her thrifted garments in her years before college, noting that the mere mention of The Salvation Army could turn outfit approval into outfit ridicule. However, she said the changes of college snub any stigma with relative ease.

“In college, I feel like people start to be more mature and start to lose that snobbiness, and they start to realize, ‘Hey, I’m a college student, I don’t have any money, and it’s such a smart idea to go and buy cool stuff for nothing,’” Bishop said.

Davis said the resale market barely differs from an age-old practice: the hand-me-down. In this respect, he said he fails to see what may have fueled a stigma toward the industry and those who interact with it.

“Clothes used to be handed down on some level, but now we just don’t do that,” Davis said. “Now you have to go buy your handed-down coat. If you think about it that way, it’s not weird, or dirty or sketchy.”

Meyer, however, has no concerns about any prevailing stigma against shopping for used clothing: the last few decades, she said, have turned thrift shopping from an act full of connotations to one rife with pride.

“I think that stigma is long gone,” Meyer said. “I think that’s something that may have existed 20 or 30 years ago, but that is long gone. People are proud to shop resale.”