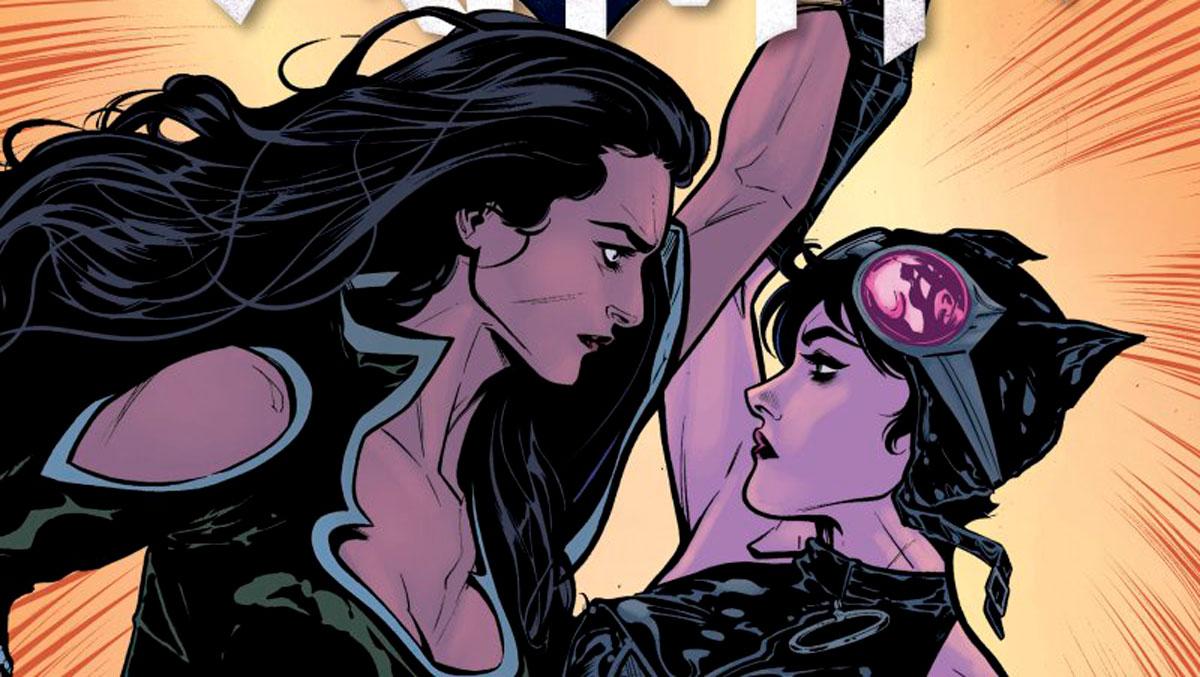 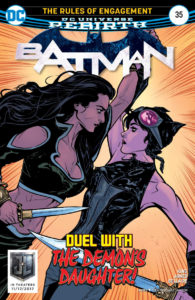 “Batman #35” celebrates 800 issues of the titular character, and it continues a recent shift away from classic Batman stories. Rather than fighting his Rogues gallery, The Caped Crusader finds himself trapped in Khadym, where his ex-wife, Talia al Ghul and his fiancé, Catwoman are engaged in a swordfight. This latest chapter is all about pairs. At various points, the story focuses on Catwoman and Talia al Ghul, Damian Wayne and Dick Grayson, Batman and Talia, and so on. This issue digs deeper into the relationship between Catwoman and Batman by analyzing Catwoman’s opinion about her fiancé’s crime fighting. Through Catwoman’s dialogue, writer Tom King paints a realistic portrait of their love. Their relationship is not perfect, and Selina acknowledges that. She sees Batman’s various faults and loves him anyway. She says that Batman is not the best, he is “just the stupid man I stupidly love.” This realism is refreshing because, in previous issues, King only scratched the surface of the emotional depth of their romance.

On that note, this issue continues a prolonged look at Batman’s hesitancy to embrace happiness. King explains it through Dick Grayson: “Being happy… is asking for something. And it’s not easy for Batman to ask.” Damian later asks his father if he is happy. Batman looks at Selina and pauses before he says that he is “getting there.” King continues to humanize Batman. Vulnerable Batman is the version of the character that is the most relatable, which shows significant growth for King’s take on the character.

This issue is not action-packed. Rather, it offers insightful analysis into various aspects of the relationship between Batman and Catwoman. 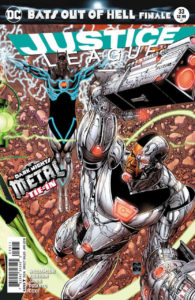 “It’s not about me…it’s about the Justice League,” Cyborg says while he deliberates whether or not to sacrifice himself. Oh, if only that were true. “Justice League #33” should be titled “Cyborg And Friends.” It is an effective Victor Stone solo story, but it misses the mark as a team story. The bulk of the story focuses on Cyborg and everyone else feels like supporting characters. The logic for this format is sound. Victor has largely been relegated to the background throughout “Dark Nights: Metal.” So, it is a good idea to have a story that brings him to the forefront. However, DC should not have printed this story in the “Justice League” series. When a reader picks up a “Justice League” comic, they expect a team-up story that attempts to equally distribute the spotlight among the members of the titular team. From the first few pages of this issue, it’s clear that this is all about Cyborg.

This issue is problematic for other reasons, too. The dialogue is often laughably bad. Cyborg delivers several lines that are unbelievably cheesy. He tells the Dark Knights that, although they tried to show him his failures, he will “always be a Victor.” There are several other ridiculously corny lines and moments sprinkled throughout the issue. “Justice League” will make the reader cringe with its dialogue and its tired cliches, which make it a fun read. 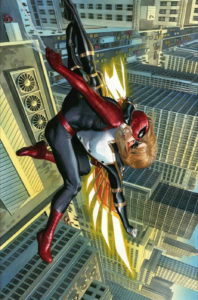 This new chapter in “Fall of Parker” storyline continues the upswing in quality of “The Amazing Spider-Man.”

Peter starts his first day as the science editor for the Daily Bugle. It’s a great new job for Peter that naturally builds on his history with the Daily Bugle and his experiences with Horizon Labs and Parker Industries. It also seems to be a fulfilling job for Peter, which sidesteps concerns that this new status quo is a backslide from his days as a CEO. It’s a logical next step that provides Dan Slott plenty of new story opportunities. Peter and his team of reporters tour a tech company only for Peter to find some nefarious technology in need of investigation by Spider-Man and Mockingbird. This series is also continuing to build on the relationship between Spider-Man and Mockingbird to great effect. They actually bicker and support each other like a real couple so readers aren’t subjected to Peter’s lousy comedic banter.

Overall, this is a funny, fast-paced romp through the world of Spider-Man with stylish, expressive and frenetic art by Stuart Immonen. 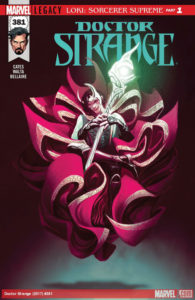 Loki is the Sorcerer Supreme, and to the shock and horror of the reader — he does nothing.

This issue suffers from a suffocating mundanity. The concept is silly but has potential for exciting stories, unfortunately but writer Donny Cates never capitalizes on that potential. Loki just boasts and whines for the whole issue and then it is over. How this issue fits into Marvel’s current continuity is confusing as well. Is the reader supposed to believe that Loki, the God who’s trying to conquer the Ten Realms in two separate series, has both the time and desire to also be the Sorcerer Supreme? And why would the God of Mischief’s main goal be maintaining peace in Midgard? These questions do not result in a fascinating mystery; it’s just poor characterization plopped on top of a willful ignorance of continuity.