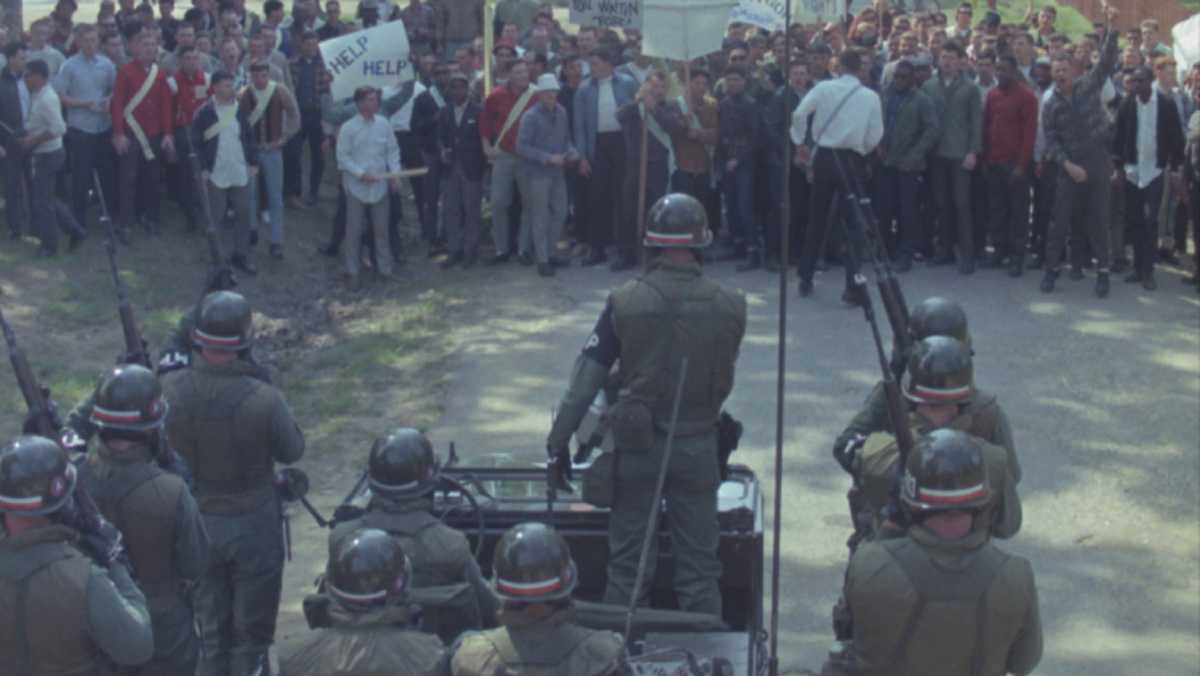 Courtesy of Magnolia Pictures
Having been in the works for six years, the Sundance Selection “Riotsville, USA” tells the story of the United States government trying to counter civil rights protests.
By Patrick Mazzella — Staff Writer
Published: November 7, 2022

“Riotsville, USA” is a 2022 Sundance Selection that could not have been more timely. Produced over the course of six years with a very limited team, “Riotsville” is a documentary that tells the story of the United States government’s attempt to create a counter strategy to the success of the protests and riots that occurred across the country during the civil rights movement.

The title of the film calls back to what many military and police officers would call the army bases turned fake American towns that were used for police departments and national guard units to emulate real riots from years prior during the civil rights movement and practice how to properly quell them.

Despite the name, the focus on the Riotsvilles only takes up one section of the film. Other sections include a deep dive into the Kerner Commission report, a study done by the government through a commission of political moderates appointed by President Lydon B. Johnson to interrogate the causes of the riots of the time. Johnson’s intent with the commission was to expose the existence of Black agitators in these riots and once and for all prove that the civil rights movement was not one to give any attention to. The report concluded the exact opposite. One of the many compelling quotes from the report expected to blame Black civil rights activists for the civil unrest of the time instead says, “Our nation is moving toward two societies, one black, one white –– separate and unequal.” This quote shocked the nation, with the bound copies of the report flying off of the shelves upon its release in February 1968.

Throughout the film, director Sierra Pettengill and writer Tobi Haslett create a much broader picture of the U.S. at the time and show how the people, as well as the government, were reacting to this period of radical social change. This broader picture is painted solely using archival footage of the era, much of it from military–mandated recordings of the Riotsville simulations as well as clips of broadcasts from the Public Broadcast Laboratory, a predecessor in government–funded television to PBS. A quote from the film that perfectly captures the overall feeling at the time, and a metaphor that the film uses more than once, says, “A door swung open in the late ’60s. Nothing that big or bright had ever happened, and in so many American cities. But someone, something, sprang up and slammed it shut.” The documentary pushes to emphasize the true nature of the time and the alarm that seemed to be going off within the U.S. government: an alarm informing them that their citizens have begun to realize that they have the power to make the change they want to see. And as any body of government, democratic or not, would do in that scenario, the only action to take from there was to stomp out the dissent.

The film’s somber, jazzy score by Jace Clayton encapsulates the new, always shifting mood of the country as well as the film. The era the film intends to depict was one of uncertainty, one of fresh ideas, something jazz is known well for. Clayton’s score, alongside Haslett’s writing and Pettengill’s direction, are able to bring audiences into this world filled with unknowns and a nation in the midst of a face–off against its government. The film allows for the audience to adjust to this brave new world that Americans at the time were also experiencing and having to find themselves within. The film includes conversations still being had today between Black activists and police officers and heads of police unions. Pettengill and her collaborators are able to situate themselves between these discoveries and the audience, guiding them through these tough situations and new ideas excellently and with grace.

“Riotsville, USA” is a triumph of documentary filmmaking. Although it contains no shocking revelations in the world of 20th century U.S. politics, it perfectly captures the tone of a shifting nation and authority scrambling to maintain the status quo. The documentary blazes through its 90-minute runtime with its expansive portrait of the U.S., paralleling the past and present of this nation’s deep–rooted racism and a history of the American protest. Pettengill and Haslett have managed to develop the defining work on our government and its blatant attempts to squash any sort of divergence from the white supremacist ideals of the U.S.

Review: ‘I Am Not Your Negro’ confronts white complacency