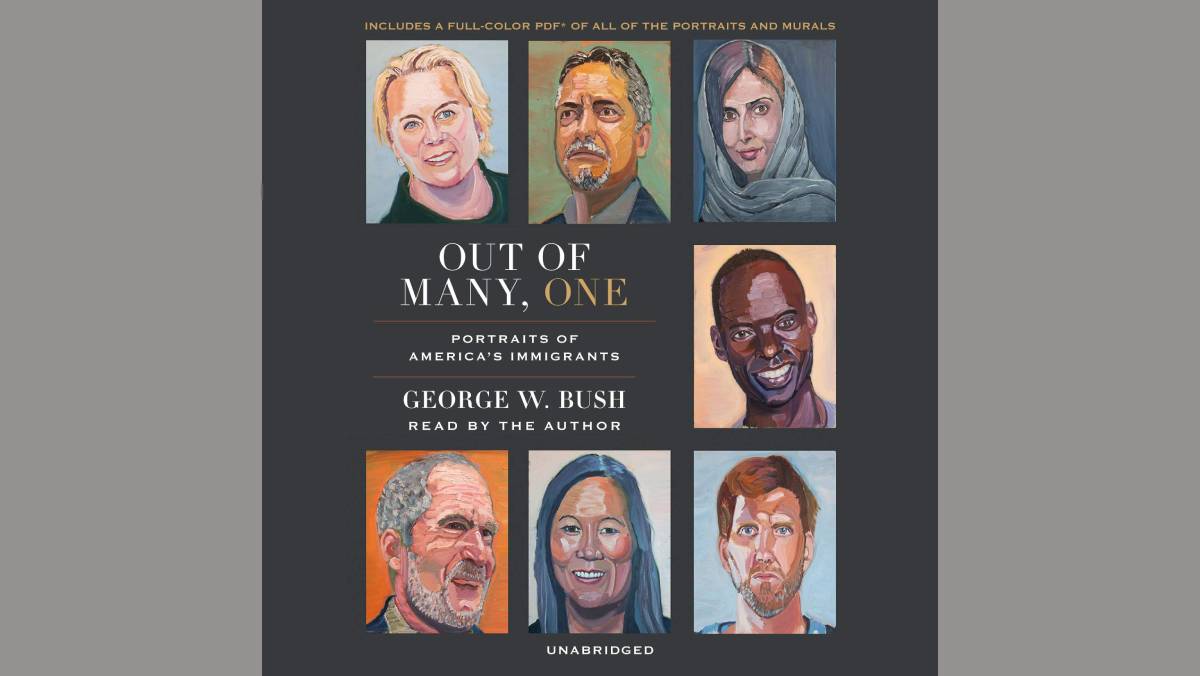 Courtesy of Penguin Random House
Former President George W. Bush’s new book of paintings, “Out of Many, One,” contains awful art made by an even more awful person.
By Elijah de Castro — Staff Writer
Published: May 4, 2021

Out of Many, One: Portraits of America's Immigrants

While this review will bring up the age-old question of whether or not one should separate the art from the artist, this criticism will not just be of the artist. This is because former President George W. Bush’s new book of paintings, “Out of Many, One: Portraits of America’s Immigrants,” contains awful art made by an even more awful person. There is no other way to say it — everything about this book is bad.

Bush began writing and painting “Out of Many, One” in 2019 as a “reminder” of the contributions that immigrants have made to American society. Featuring kitschy paintings and weird descriptions of a wide variety of American immigrants, “Out of Many, One” confirms that Bush’s pseudo-statesman, funny-guy presidential personality comes from a place of naive lethargy rather than genuine evil. Which of these is worse? The world may never know.

Reading Bush’s book is consistently insidious because Bush’s presidency did not produce favorable outcomes for immigrants. Bush founded Immigration and Customs Enforcement (ICE) which has forced immigrants into slave labor, raided the homes of thousands of immigrants and separated children from their parents. Bush also signed the REAL ID Act into law which drastically curtailed habeas corpus for immigrants, a law that allows people who are arrested to appear in court.

The format of the rest of Bush’s book is simple; Bush shows readers an oil portrait he made of an American immigrant and follows it up with several pages telling the story of the immigrant. It’s a fine idea for a book, however, the fact that it comes from a member of the Bush family — a borderline dynasty of Republican elites — is bizarre and preachy, let alone snobby and postural.

However, Bush’s book was advertised for the paintings, which — by any classical art standards — are on the level of artwork made by a high school senior with a high self-esteem. A great example of this is Bush’s painting of Gilbert Tuhabonye, an immigrant from Burundi. In the painting, Bush attempts to create a reflection of light off Tuhabonye’s forehead, which strongly clashes with Tuhabonye’s skin tone. Poorly blended and unintentionally scrappy, the only reason that Bush’s paintings would be picked up by a publisher is the fact that yes, a former president painted them.

Disturbingly, one of Bush’s biographies is of former Secretary of State Henry Kissinger, who served from 1973 to 1977. Bush’s goofy painting of Kissinger is one thing, but when he begins praising Kissinger’s legacy, the effect is nothing short of horrifying. Bush’s description ignores that Kissinger’s legacy includes the secret bombings of Cambodia that killed over 50,000 Cambodians and supporting the 1971 genocide in Bangladesh.

“Out of Many, One” seems more like an attempt to win back liberal circles rather than serve as a tasteful tribute to immigrants of America. Unfortunately it has worked, and in recent years Bush’s approval rating amongst Americans and even Democrats has risen above 50%. The reality is that Bush’s legacy for immigrants is no different than former President Donald Trump’s. The only difference is that Trump was more shameless and intentional with his attacks on immigrants.