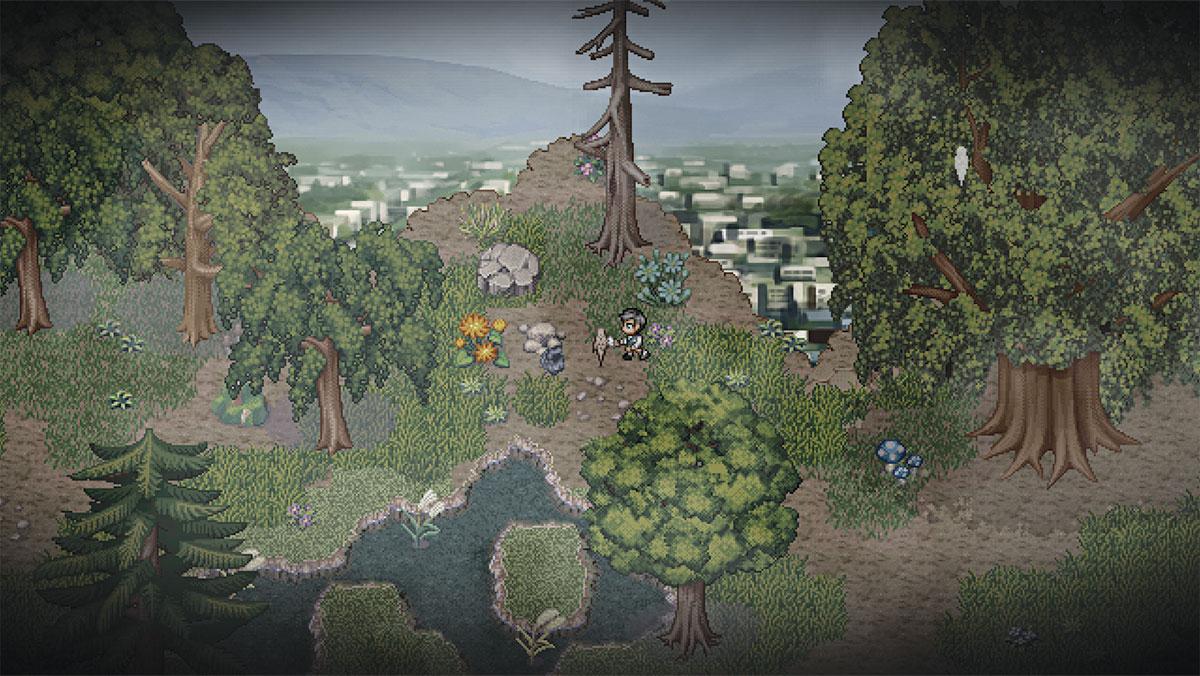 Courtesy of Freebird Games
The boy and his bird venture through a forest overlooking the city in “A Bird Story.” The game follows these two as they form an unlikely bond, leading them to sorrow, joy and friendship.
By Steven Pirani — Assistant Life & Culture
Published: November 19, 2014

Overlooking a blue, glittering metropolis, a young boy stands on his balcony, paper airplane in hand. He chucks it out over the railing, and it soars down into the city streets. Overhead, two birds fly by, mere silhouettes against the sky.

It is these tranquil, pensive moments that open Freebird Game’s “A Bird Story,” an emotional and hauntingly beautiful indie game that follows a lonely boy with a love for flight. Constantly daydreaming and folding small paper planes, this young boy lives a routine existence until he comes upon an injured bird, which he soon takes into his care. What ensues is a tender and elegant portrayal of friendship as players witness their bond grow. Though the narrative sometimes proves to be a bit vague, “A Bird Story” finds success through its impressive ability to evoke emotion throughout the game.

What will strike players first will likely be the visual style of “A Bird Story.” It is rendered in pixel art and played from a top-down perspective, bearing a look that many, at a passing glance, may recognize as dated. However, these visuals prove far from inadequate, with sprawling vistas and cozy bedrooms both depicted with impressive artistry despite their older methods of rendering. Notably impressive are the city views, which offer a more colorful and creative alternative to the gray urban sprawls one may expect, making “A Bird Story” a treat to take in.

Its good looks prove a strong asset, as players will find themselves watching “A Bird Story” as much as they will find themselves playing it. The game fuels its narrative through guided cinematics, often feeling more like an interactive movie than a full-fledged video game. This aspect of “A Bird Story” may prove divisive for some gamers, especially those looking for a more interactive experience. While “A Bird Story” will often give players control, these moments are often short and serve only to trigger another cinematic, taking away some of the interactive attributes players may expect in video gaming.

It is within this notion that the greatest weakness of “A Bird Story” becomes evident: It often ventures past tasteful simplicity and into the realm of vagueness. There is no dialogue, apart from question and exclamation marks that spring from characters’ heads, and as a result, the narrative often suffers. It would seem that Freebird Games wanted to tell a story with a degree of artistic minimalism, but in this pursuit, they have neglected to create a consistent vehicle for the narrative. Perhaps the best example of this is a scene where the boy has taken his winged friend to the vet — a moment that abruptly becomes a chase, leaving players in the dark in regard to what conflict is ensuing.

Though this is not to say the tale told in “A Bird Story” is not one worth telling. When it succeeds, it does so with superb poise, balancing humor and sorrow with commendable ease. This is achieved particularly well through flashbacks, which allow players to reminisce over the boy’s growing friendship, while also earning a sense of painful nostalgia.

However, for those moments where the narrative does falter, the overall experience is kept afloat with its impeccable atmosphere. “A Bird Song” boasts a palpable tone of sorrow that proves extremely effective when paired with its soundtrack. Scarce, plinking keys sound out as the boy ventures throughout his day, and as his relationship with the bird evolves, the game is unwavering in establishing a lonely, longing tone up until the very end. In this, the game takes on an emotional dimension not typically seen in games that immensely aids in immersion.

What “A Bird Story” does most effectively is convey emotion — oftentimes, these sentiments come without a concrete narrative to dwell in, but it nonetheless delivers that evocative experience. It’s a simple tale told through even simpler means, but the result is one wholly complex: a game that proves more than just a diversion, but rather an atmospheric look at an unlikely friendship.