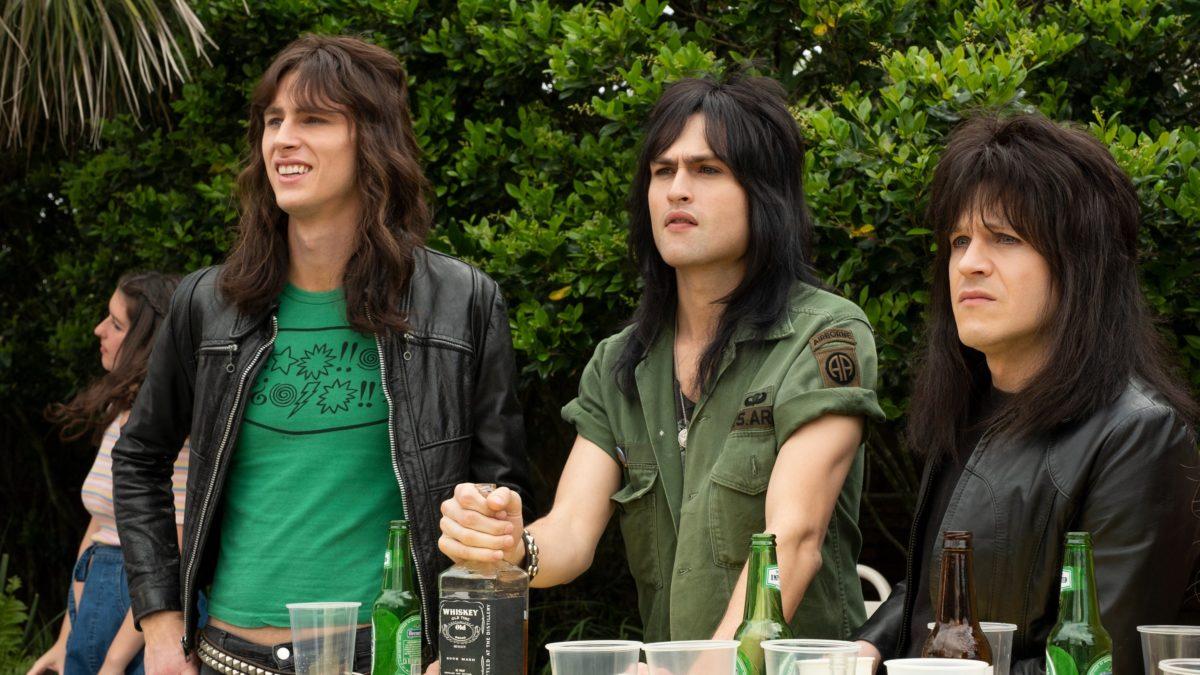 NETFLIX
"The Dirt" is an inaccurate, indulgent look into the lives of Mötley Crüe. The characters and situations feel laughable but not in a good way and everything the movie has to offer falls into a drag of monotony.
By Arleigh Rodgers
Published: April 1, 2019

One question plagues the audience throughout “The Dirt”: At what point in the movie is the audience supposed to accept sweet and baby-faced Douglas Booth as the hard-rocking, heroin-shooting, Jack-Daniels-bottle-smashing Nikki Sixx?

Director Jeff Tremaine’s unflinching — so-called by the film’s description on the streaming site — Netflix biopic charts the Los Angeles-based rock band Mötley Crüe during its rise to fame and misfortune in the 1980s. Much like Martin Scorsese’s “The Wolf of Wall Street,” “The Dirt” revels in the self-destructive antics of its main characters. And much like Jordan Belfort, the “The Wolf of Wall Street”’s rich and reckless playboy protagonist, Mötley Crüe’s blurry nights are encircled by swooning blonde groupies, silver plates of cocaine and light green beer bottles waiting to be broken.

But “The Wolf of Wall Street” is never defined by spiritless monotony in the way “The Dirt” is. “The Dirt” attempts to squeeze out some humor though breaking-the-fourth-wall commentary and the band’s recklessness, but it never reaches the hilarious mania “The Wolf of Wall Street” does. It’s clear Tremaine is attempting a tone similar to Scorsese’s, but the undertones of feel-good heroism and banal voice-over commentary in “The Dirt” discredit the film’s ability to be either dramatic or hilarious.

This generic foundation shines just as bright as the silver-studded belts hanging low on the band members’ waists. This film’s conventionality offers little else but the stale structure so often used by a multitude of previous biopics. The voice-over narration, which switches confusingly and without transition from one band member to the next, sets the stage for the chaotic and ludicrous decade that was the 1980s. It’s hard to buy into Booth’s feigned, scathing drawl, which narrates the opening scene of the film, especially when the audience faces the sheer ridiculousness of each actor’s costumes and hairstyles.

Though these elements ultimately heighten the band and the film’s absurdity, they’re more gratifying than they are foolish. Or perhaps their foolishness is the gratifying element, but when Nikki first introduces himself as a flame licks at his leather-clad left arm, his face silhouetted by his shaggy, wig-like mane — “That’s me trying to prove how punk I am,” he says — it’s hard not to indulge in the supreme idiocy of both the characters’ actions and their outfits.

Drummer Tommy Lee (Machine Gun Kelly), lead singer Vince Neil (Daniel Webber) and guitarist Mick Mars (Iwan Rheon) join Nikki in Mötley Crüe, and the group is exactly how Nikki describes it; “We weren’t a band,” he says, “We were a gang.” Their camaraderie truly shines, the result of decent work on each actor’s part. But the lack of authenticity in the film’s dialogue results in brainlessly inspirational conversation rather than words spoken by real people. Netflix prides “The Dirt” for its supposed raw genuineness, but this sentiment is noticeably and viscerally absent in both the early scenes’ passing conversations and the darker scenes in the latter half of the film.

Though brief in his appearances, Pete Davidson’s role as Tom Zutaut, a representative from Elektra Records who wants to sign the band, is quite easily the best of the film. Davidson’s bumbling and nerdy Tom is a breath of fresh air next to the likes of Mötley Crüe, who first greet the awkward Tom with a surprise blowjob from a girl hiding under their table. Davidson’s acting is easily the best of the cast, his experience in comedy more pronounced and effective when he says, extremely deadpan, “Bottom line is, don’t ever leave your girlfriend alone with Mötley Crüe. EVER. Because they’ll f— her.”

Much like the complaints surrounding “Bohemian Rhapsody,” there’s much of Mötley Crüe’s history that “The Dirt” gets wrong — and such is the reality of based-on-a-true-story films, especially those that simplify the unglamorous aspects of a story. This is the sentiment most present in “The Dirt.” Though “The Dirt” does represent the band’s history more accurately than “Bohemian Rhapsody” does, both settle for fancier portraits than they do the truth. And when “The Dirt” tells more saccharine stories than the gruesome truth, it loses both the interest of the audience and the compelling history of Mötley Crüe.