Review: Pixar brings life to the Land of the Dead 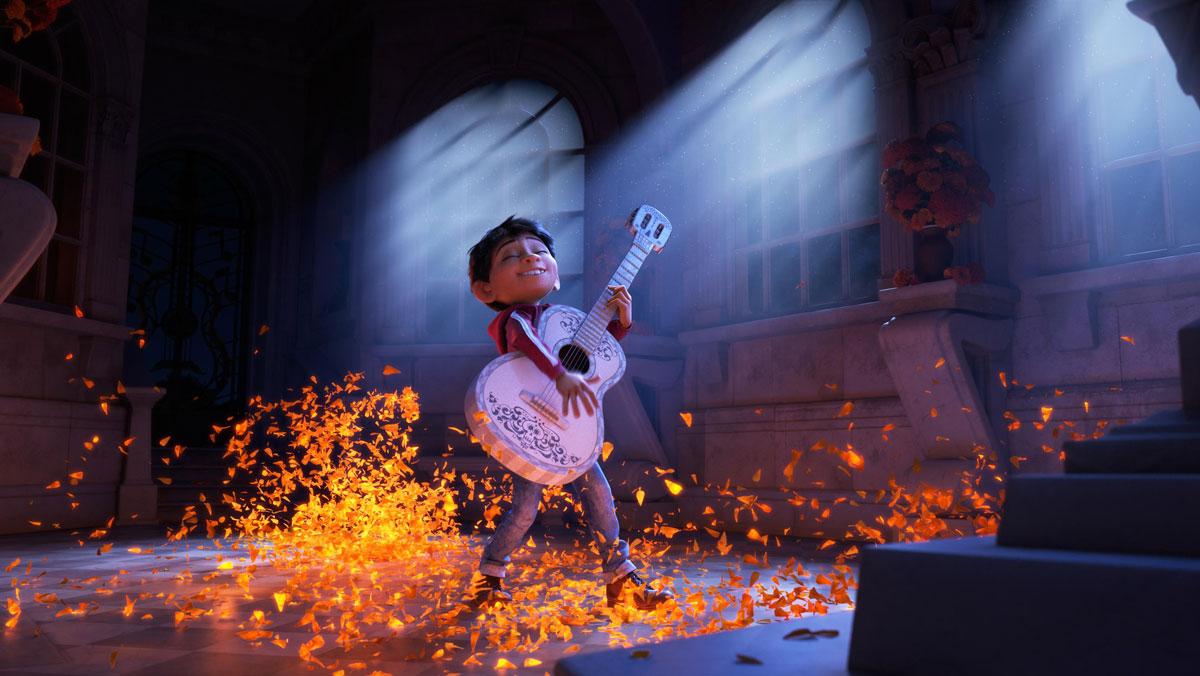 Pixar
“Coco” is heavily inspired by Mexican mythology and details Miguel’s (Anthony Gonzalez) journey into the land of the dead. Miguel’s family has banned music from their lives, but Miguel aspires to follow in his idol, Ernesto de la Cruz (Benjamin Bratt) to become a musician. The film is accompanied by “Olaf’s Frozen Adventure,” a twenty minute short set in the “Frozen” universe.
By Liam Conway — Staff Writer
Published: November 29, 2017

Only Pixar could make the Land of the Dead feel so alive. “Coco” is the latest animated film from Pixar, and it continues the legacy Pixar has worked so hard to create. “Coco” tells the story of Miguel (Anthony Gonzalez), his family of shoemakers and the impact music has on his life. Miguel’s journey through the land of the dead is full of incredible life and color that combines a realistic aesthetic with the fun and popping colors Pixar is known for. All of this is tied together with an emotionally resonant story, making “Coco” a great film for all ages.

Miguel grows up in a family that has banned music in their lives, but he feels compelled to pursue a career in music. Miguel’s drive to play music sends him on a path of self-discovery as he uncovers the truth of his heritage.

The filmmakers successfully introduce many members of Miguel’s extended family without making the film feel overcrowded. The film doesn’t waste time on exposition, and instead, lets the characters speak for themselves, primarily through their actions. This simplistic–yet–brilliant introduction of characters helps contribute to the breakneck speed of the film.

The overall story of “Coco” illustrates the traditions associated with Mexican culture, and more specifically, the Day of the Dead. The filmmakers clearly don’t try to educate American audiences who have absolutely no prior knowledge of the holiday, but it does work to expand the way American audiences might view the holiday and shed light on the true nature of the beautiful celebration. “Coco” also does a wonderful job playing with the holiday, showing how the afterlife is supposed to be a fun and happy experience. In the end, “Coco” conveys a beautiful and moving message that may bring tears to the eyes of even the toughest audience members.

Although the vibrant array of characters and thrilling story are integral to the success of “Coco,” it’s the lively, colorful animation that makes the film truly stand out. There are several moments in the film where the characters are nearly photorealistic without losing their cartoonish charm. That being said, the most remarkable visual moment in the film comes when Miguel enters the Land of the Dead for the first time and sees the world in its full glory. Besides the amazing colors and layering, the way everything is constantly moving makes the Land of the Dead feel like a living and breathing world. It’s the visual style that ties “Coco” together, making it a delight to behold.

“Coco” is another demonstration that Pixar has perfected the family film formula and manages to create a visual tapestry far beyond what might be expected. Despite its brilliance, “Coco” is hindered by the short that plays before the film. Pixar has become famous for their pre-movie short films, and as the film begins, the audience is greeted with a short following the antics of the characters from Pixar’s “Frozen,” specifically Olaf. This short is terribly out of place, especially for someone who might not be familiar with “Frozen.” On top of the strange placement, the short is not so short, clocking in at around 20 minutes and featuring several songs. It is baffling as to why Pixar included this short as a part of the film. After the excessively long short ends, there is a pre-roll where some animators talk about the making of “Coco.” The poor lighting and unscripted nature feels terribly unprofessional, which made this whole pre-roll thing even more jarring.

“Coco” is one of Pixar’s most outstanding films to date, and continues to illustrate how Pixar is constantly pushing the boundaries of visual and narrative excellence. It also does an amazing job exposing people to a beautiful culture through a fun and uplifting story that carries real emotional weight.

Review: Pixar goes inside the mind with stunning and sophisticated film