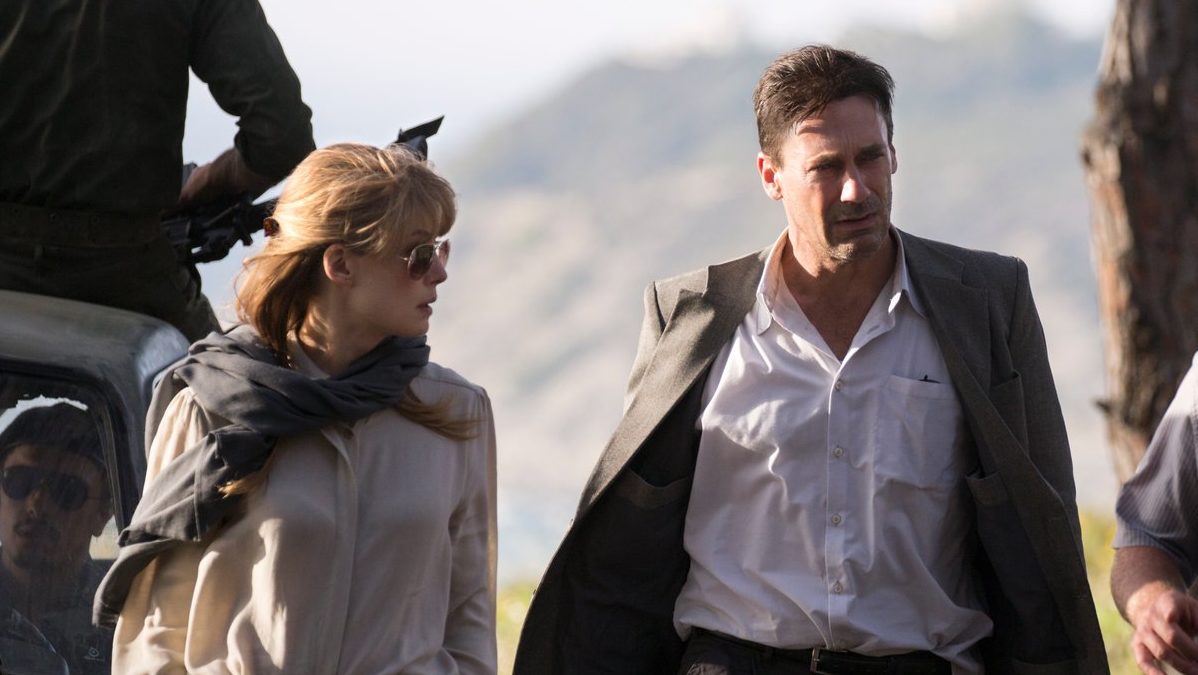 Radar Pictures
Jon Hamm stars as Mason Skiles, an ex-U.S. diplomat to Beirut who must negotiate a hostage exchange and navigate the dangers of politics in the Middle East.
By Colin Tessier — Staff Writer
Published: April 24, 2018

The camera focuses on a group of children laughing and playing around a rainbow umbrella on a beach. The sun is shining, and there’s not a cloud in the sky. The children ignore the menacing tanks that roll by just a few feet away. The dichotomy of blissful innocence and violent corruption recurs throughout “Beirut,” and it reminds viewers that, even in places devastated by war, peace can still be found if one looks hard enough.

Mason Skiles (Jon Hamm), a U.S. diplomat to Beirut, loses everything when his wife, Nadia (Leïla Bekhti), is killed in a terrorist attack. Ten years later, the United States government manipulates Skiles into returning to Beirut, despite the fact that he left his role in the government soon after his wife died. Upon returning to Beirut, Skiles must negotiate a hostage exchange with Karim Abou Rajal (Idir Chender), who has taken an American agent captive. The film’s set-up is somewhat sloppy and far-fetched. The viewer is supposed to believe that Skiles, a man who left Beirut a decade ago, is the government’s best option in retrieving this hostage when, in reality, the government would have other, better-equipped agents to deal with the crisis. Additionally, the hostage just so happens to be Skiles’ former best friend, and the terrorist just happens to be the one responsible for Nadia’s murder. The odds of these circumstances coinciding is so unlikely that it hurts the believability of the plot.

The film jumps around in a way that weakens the impact of Skiles’ personal journey: His wife dies, and the story immediately jumps 10 years into the future. Most of the discussion of Skiles’ grief is left to oddly placed flashbacks and a literal trip down memory lane in which he returns to his former house. Skiles’ story of perseverance and redemption would resonate more if the viewer got to see more of his grieving process.

“Beirut” is not a masterpiece, but it is an enjoyable thriller that makes the viewer question the actions and motives of the United States government in its interactions with the Middle East. The film’s reflection of real–world events makes it resonate more with viewers. Director Brad Anderson focuses on the Lebanese Civil War, and the missteps and questionable actions by the United States as depicted in the movie remind viewers of current events in Syria. “Beirut” lacks strong protagonists, which is representative of the complicated nature of that ongoing conflict. The majority of the film consists of Skiles and other State Department officials racing against Rajal’s deadline to meet his demands. Skiles and company must also navigate the treacherous waters of politics in the Middle East, which is where the real heart of the suspense lies. Double crosses and ulterior motives provide most of the movie’s excitement because the characters do not know who to trust. This provides plenty of uncertainty for viewers, drawing them further into the plot.

Hamm carries the movie with a charismatic performance that reminds the viewer of his award-winning depiction of Donald “Don” Draper in “Mad Men.” Hamm perfectly conveys the crushing loss Skiles feels years after his wife dies. Hamm also takes painfully clichéd dialogue and hams it up. For example, Skiles is sitting in a bar when he is asked to return to Beirut. With a shot glass in hand and fluorescent green lights covering his face, he says, “I wouldn’t go to Beirut if it was the last place on Earth.” Dialogue like that should not work because it is so on-the–nose and unsubtle. However, Hamm’s strong, confident delivery makes it palatable, if not amusing.

Disregarding the last five minutes of the movie, “Beirut” is a captivating spy thriller that holds the viewer’s attention and tells a fairly successful story. It is in those last five minutes that Anderson polarizes the audience. One of the Americans, Frank Shalen (Larry Pine), states that everyone won, which is an ignorant conclusion to draw from the resolution of the hostage exchange. The characters that survive pile into their Jeeps and literally ride off into the sunrise. As they do so, an American flag waves in the foreground. The Jeeps exit the frame, and the camera focuses on the flag just long enough to be obnoxious. Some viewers may appreciate the blatant patriotism, while others will call it nauseating nationalism. The film ends on this sour note, leaving viewers with a bad taste in their mouths.

“Beirut” is a typical espionage thriller. It offers some plot twists, a strong performance by Hamm and a believable depiction of the United States’ controversial involvement in the Middle East. The film stands out from others in its genre because of the relevance of its story, but jumps in narrative and the plot’s implausibility hurt its overall quality.