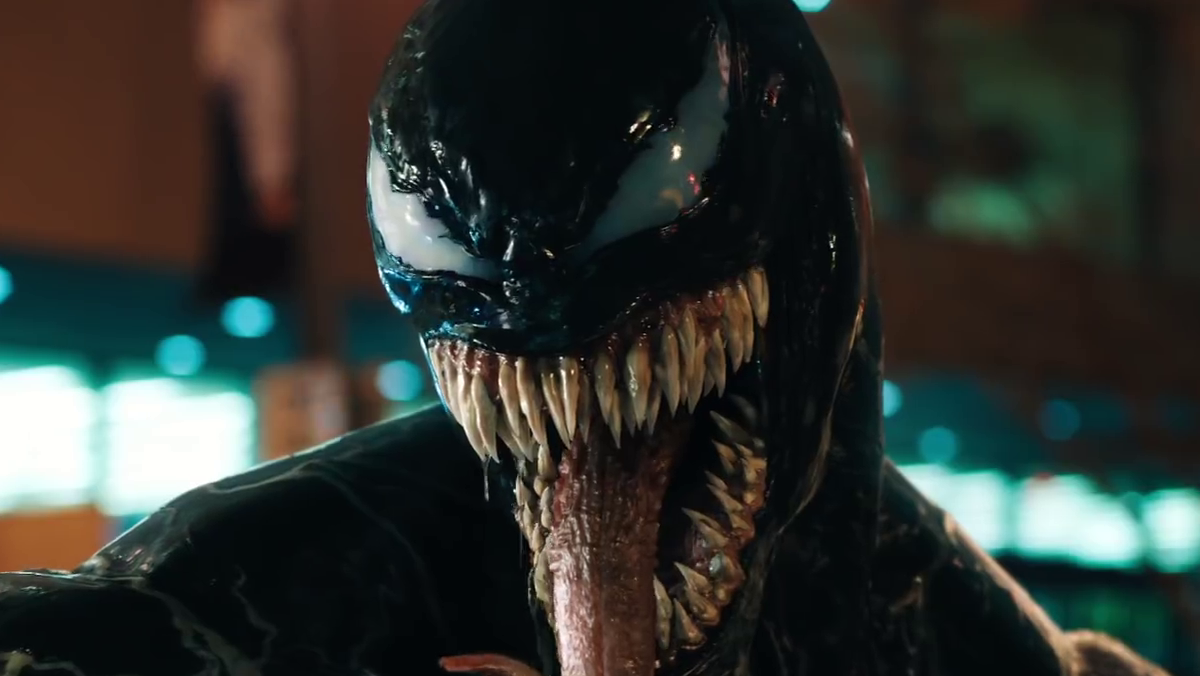 From its opening scene to its farcical post-credit scene, it was hard not to chuckle and twit at “Venom,” the movie Sony Pictures plucked out of thin air. While there were a small handful of comedic scenes that actually worked, they were not the reason the audience was laughing — sadly, it was that laughter was the only medication to help get through this littered atrocity of a film.

“Venom” is one of nine superhero movies scheduled to be released this year, which makes the film’s main advertising tagline, “The World Has Enough Superheroes,” feel even more relevant. The film, directed by Ruben Fleischer, is based on the iconic Marvel supervillain featured in the Spider-Man comics. The film follows Eddie Brock (Tom Hardy), an investigative reporter trying to take down Carlton Drake (Riz Ahmed), the brilliant but dishonorable founder of the Life Foundation, a corporate survivalist group. After breaking into his lab while investigating Carlton’s corrupt experiments involving extraterrestrial symbiotes, Eddie emerges with one of the creatures and becomes Venom: a sentient alien symbiote that requires a host for survival.

The movie’s paper-thin premise never truly evolves into anything substantial. The story simply does not work. It’s filled with plot holes, huge inconsistencies and loose ends that are never tied up, leaving the viewer utterly unsatisfied long after the credits finish rolling. The only part of this movie that actually stands out is Eddie’s character, who turns into Venom, and the conflict shared between the two contrary personalities that battle out inside Eddie’s head.

Hardy doesn’t have a lot to work with, mainly due to a muddled script filled with cheesy dialogue that would barely pass for the Saturday–morning cartoon “Spider-Man: The Animated Series.” Despite this — and a phoned-in, incomprehensible Boston accent — Hardy gives this role his best and actually manages to deliver a compelling performance, even though his character comes off as shallow and uncharming at times. Eddie is supposed to be a famous reporter, but he shows no signs of ethics for anyone or anything and is unfittingly selfish.

Once transformed into Venom, however, the antihero mostly looks and acts the part of the iconic comic book character — at least a lot better than Topher Grace’s incarnation of the character in “Spider-Man 3,” which was such a bad performance that it almost killed the entire film. The dynamic between Eddie and Venom inside his head is weird but oddly fascinating to watch. Eddie is being controlled by Venom, and watching them negotiate when Venom is allowed to come out and who he’s allowed to eat is outrageously hilarious. If the film ditched the deadweight supporting characters and focused more on this conflict, “Venom” would’ve been exceedingly better.

Eddie’s fiancée Anne (Michelle Williams) surprisingly does more than the average damsel-in-distress in comic book movies. Unfortunately, the chemistry between Williams and Hardy just isn’t strong enough to make the audience care. When Anne hands Eddie back the ring after he gets fired in the first 20 minutes of the film, there is no emotional impact. The same issue can be said about Carlton, who becomes the film’s main antagonist, known as Riot, once paired with his symbiotic counterpart.

Ahmed fails to make his character magnetizing, menacing or even memorable by any means as he plays the most generic mustache-twirling supervillain whose motivations are never expanded beyond just being the evil guy. The climactic action sequence between Venom and Riot is one of the worst final battles in the history of comic book movies due to the laughable action and visual effects, which looked like two CGI blobs of slime being smashed together like action figures made out of Play-Doh.

The action scenes in this film are underwhelming, especially because there are no giant spectacles to look back on. The action sequences with Venom are at least entertaining and show the symbiote dropping humans left and right with ease, but having the character feel practically indestructible means there are no stakes to the action for either the host or his parasite. Also, in a film where the main character enjoys biting people’s heads off, it’s apparent that Venom has to restrain itself due to the blockbuster’s PG-13 rating.

Though Hardy’s Eddie and Venom share a zany relationship that appeased most comic book fans, it’s not enough to distract the crowd from this careless and forgettable film. Considering almost every other aspect fell flat, it’s difficult to recommend “Venom” to either superhero fans or casual viewers alike.