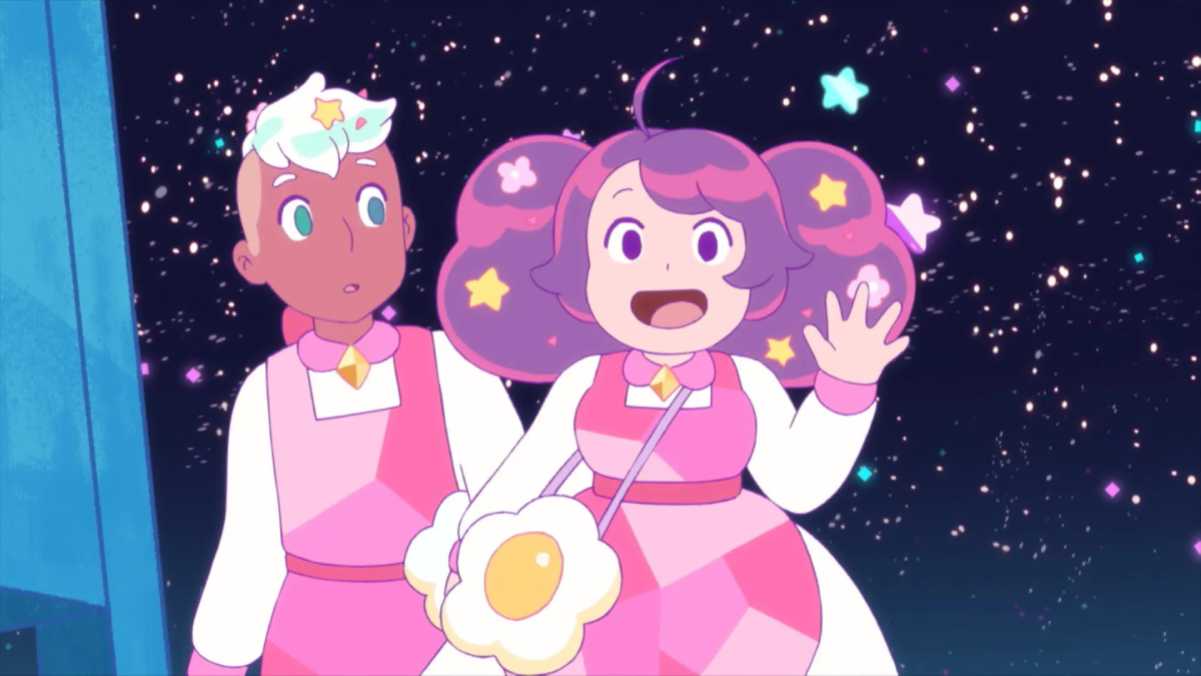 Bee and Puppycat: Lazy in Space

“Bee and Puppycat” is an incredible show that combines an odd sense of melancholy with fantastical whimsy. When asked to describe the genre, fans might find that question to be one of the most difficult on the planet. Slice of life? Space fantasy? “Sailor Moon” for depressed millennials? The subject of this review, “Bee and Puppycat: Lazy in Space,” is a soft reboot/second season of that show. Although it redoes some elements from “Bee and Puppycat,” it also adds new characters, stories and emotions. On its own, it gets close to excellent, but compared to the original show, it falls a few steps short.

“Lazy in Space” shines when it’s not rehashing the content of the original “Bee and Puppycat.” Its middle is when it’s at its strongest, filled with the whimsical adventures of slacker Bee (Allyn Rachel) and her wisecracking cat (or is it a dog?) Puppycat, voiced by a singing voice synthesizer (Vocaloid) named Oliver. The show never takes its story too seriously, which allows a lot of its goofy moments to shine through. In one episode, Puppycat fawns over TV personality/food–enjoyer/mayor Pretty Patrick (Patrick Seery). In another, Bee’s friend Cas (Ashley Burch) decides to put on every self-care face mask that she’s been hoarding, thus causing all of her friends to think she’s a monster. “Lazy in Space” thrives off of the silliness and occasional heartfelt moments between the characters.

At its weakest, “Lazy in Space” feels like a so-so second serving of its predecessor. For returning fans, the first three episodes might be particularly hard to get through, partially since they take out a lot of the heart of the original show, but also because they repeat some stories from the original show nearly word-for-word. In one scene, aspiring cook Deckard (Kent Osborne) makes the decision to go to culinary school and says goodbye to Cas, his sister. “Lazy in Space” misses out on the emotion from the original show, instead opting for a large dose of goofiness and jokes. It’s not bad, but it feels hollow without the thoughtful goodbyes and moments of silence in the previous iteration of the same scene.

Additionally, the characterizations feel a bit inconsistent. While Cas is a wrestler who is always itching to fight her siblings, she’s also one of the more levelheaded characters of the original show, balancing out the goofiness of Bee and Puppycat’s antics through a much-needed realness in the show. “Lazy in Space” offers more moments focused on her character but makes her much sillier in order to make her stories have higher energy. Moreover, while she pushes Deckard to go to culinary school in the original show, she chastises Bee for doing the same in “Lazy in Space.” It seems out of character for her to not want to encourage her brother to pursue his passion. Her emotions could be nuanced, which would be interesting, but the show doesn’t take that route.

Despite its 16-episode run, “Lazy in Space” feels rushed. The emotional beats of the story aren’t given enough time to breathe, which leaves the show inconsistent and unsatisfying. Its high-energy antics are undeniably fun, but it doesn’t quite give enough attention to the numb sadness that made the original show special.

For viewers who have never watched the original “Bee and Puppycat,” they will find “Lazy in Space” to be a fun, hilarious, if perhaps oddly–paced, adventure. Regardless of its shortcomings, it’s a good time with endearing characters and wonderful stories, filled with surprises and jokes at every corner.

Review: ‘First Man’ is a terrifying tale of moon mission