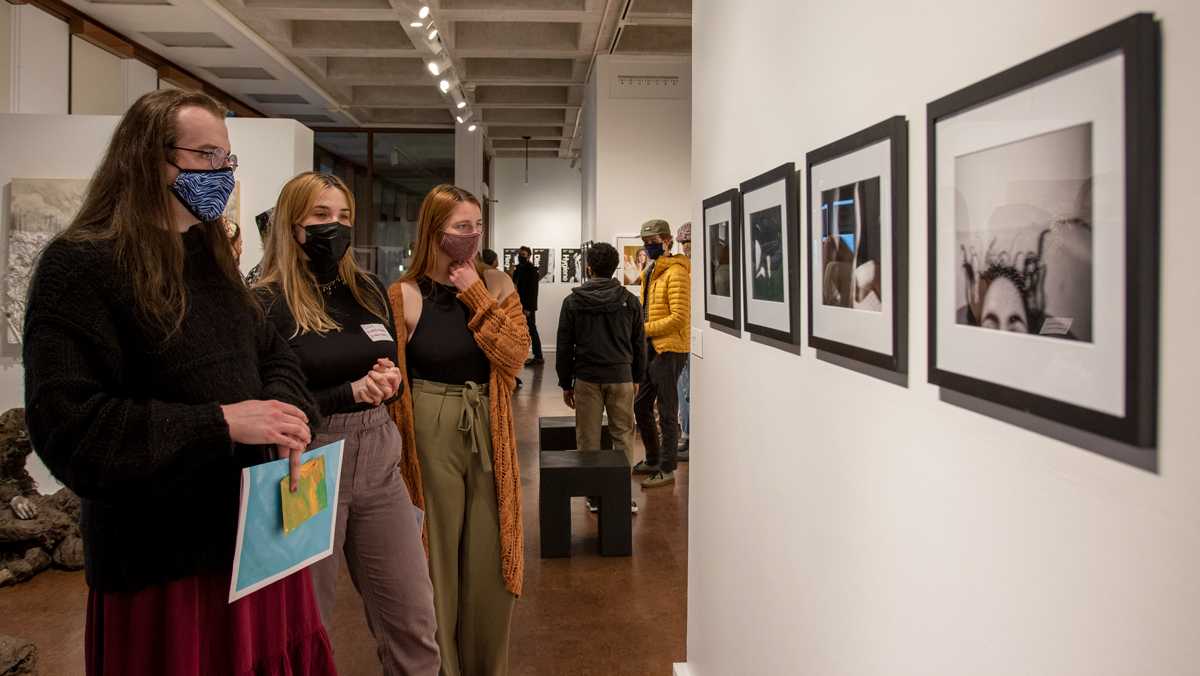 Senior Andrew Lackland, an art major, strolled among an array of dark sculptures, staggered before a sullen gray canvas, in the far right section of the Handwerker Gallery at Ithaca College. The expressionless and haunting figures are crafted with wire fencing, burlap, acrylic paint, mud, cement and joint compound and are part of Lackland’s senior thesis. They are one of 22 seniors featured in the gallery’s annual senior student showcase, this year titled “NEVER SETTLE.”

A reception for “NEVER SETTLE” was held in person April 22 at the Handwerker Gallery — a change from 2020, when the senior showcase was held digitally because of the COVID-19 pandemic. Abstract photographs, black and white pictures and vivid pastel portraits hung on the gallery’s walls. The showcase can be perused online as well as in the Handwerker Gallery until May 18.

This year, senior Lily Hoffman, an art history major with a concentration in museum studies, curated the showcase around novelist John Berger’s quote, “The Relationship between what we see and what we know is never settled.” Curating “NEVER SETTLE” was her senior thesis, and she said it has been rewarding because she was able to interact with fellow seniors’ artwork.

“I set out to achieve a show that captured kind of how everybody was feeling right now in terms of everybody in general,” she said. “Sometimes I feel super lucky that I’m leaving college right now because things are so uncertain, but sometimes I’m really scared to not be in something so secure. So I was trying to come up with a show that was centered around that feeling, that everybody in it and people watching it could understand.”

Lackland said the inspiration for their senior project was climate change and how they think people in the United States feel disconnected from climate refugees from other countries. Three nearby paintings — oil and acrylic landscape portraits on panels that continue the project’s muted theme — are also part of their thesis.

Lackland said they started work on the sculptures and paintings in Fall 2020 and finished in early Spring 2021. Like some other seniors in the show, this is Lackland’s debut in the Handwerker Gallery.

Another art major featured in the show is senior Danielle Fernandez, who has several black and white posters and a series of acrylic-painted panels installed at the gallery. The panels — blurry painted portraits — imitate scrolling through social media posts, and her posters mimic Instagram posts from her favorite musicians. The latter idea came to her from missing live concerts during the COVID-19 pandemic.

“I really missed concerts and how cool of an experience it was to go to an event of someone whose music you might listen to every single day and actually get to see them live, hear them live, surrounded by other people who love them just as much as you do,” she said. “I wanted to shift my focus to how [musicians] were using social media … to continue to interact with their fans and how I, as a fan, can interact with other fans and artists.”

Senior Olivia DiPasca, a film, photography and visual arts major, also said the pandemic impacted her approach to the black and white photographs she submitted to the show. While art majors’ creations were given a full wall or section of the gallery, the other featured artists sent in submissions that were selected for the show by photography and art professors.

DiPasca said she took the pictures for a darkroom photography class with Steven Skopik, professor in the Department of Media Arts, Sciences and Studies. Shot on film, the photos capture the interaction of dark shadows and bright lights in her home in Massachusetts, where she lived after classes turned remote in Spring 2020.

“For weeks on end, I wasn’t able to sleep,” she said. “I was up at night, awake in my house, wandering around, and I just kind of began to notice where light and shadows intermingled. … Being home and having to work creatively from my house for the first time in a long time forced me to view my environment in different lights.”

Before the pandemic, photography was a novel practice to senior Teresa Gelsomini, an acting major. One of the photographs featured in the showcase is one of the first she ever took, she said, though she recalled that when she was younger she would carefully examine photographs her family members had taken.

Gelsomini’s photos show different environments with approximately one year between them. The first 33 photographs in the project were taken in March 2020, she said, after she took her Nikon camera from home to Ithaca over spring break. In 2021 around the same time, she grabbed her camera again and revisited the locations of her original photographs. Two of the 33 are featured in the show.

“It’s funny because when I first took the photos, I never did it with the intention of recreating,” she said. “As soon as I got into the door of my apartment [in Ithaca], that’s when the whole student body that got the email that our spring break was extended for a week. … So it was a funny moment because I knew that things were just going to change.”

At the showcase, junior Quinn Karlok said he enjoyed the reception after not being able to attend one during the pandemic.