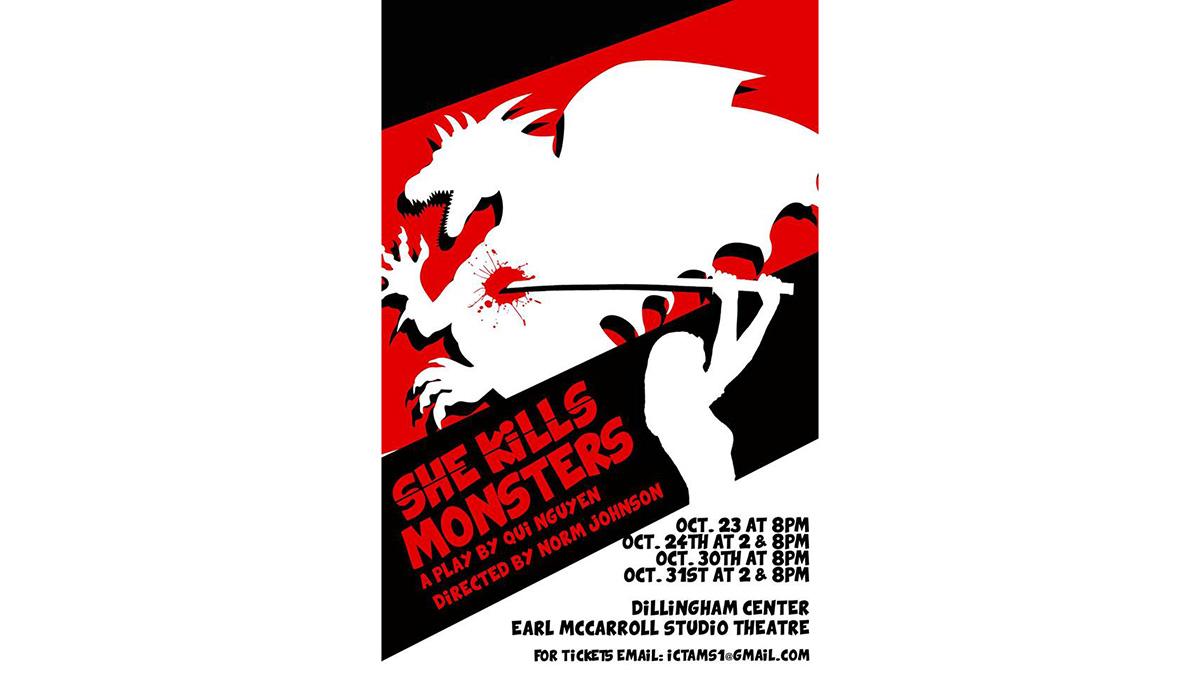 Following the death of her sister and parents, Agnes Evans is getting ready to move out of her house. While packing up her things, she stumbles upon her late sister Tilly’s “Dungeons and Dragons” playbook. She’s quickly transported into the universe of “Dungeons and Dragons,” a fantasy role-playing game that involves mythical creatures like wizards and ogres, and encounters her sister’s vast and violent world of imagination.

“She Kills Monsters,” written by Qui Nguyen, is an adventure-comedy presented by IC Theatre in the Dillingham Center’s Studio 2. Stage manager Liza Miller said the play is almost entirely set in Agnes’ imagination and the “Dungeons and Dragons” world Tilly created. As Agnes plays the game, she begins to understand her sister more and copes with moving on after her death.

“It’s all about imagination and making everything up,” Miller said. “The whole show is happening in Agnes’ head, but you see it happen onstage, even though knowing the whole time it’s all in her head. It’s a lot of fun.”

Miller said the script also called for imagination on the part of the cast and crew, particularly in planning the fights. Senior Jordan Friend choreographed most of the combat scenes, which he said was particularly challenging given the space: Dillingham’s 15-by-22-foot Studio 2.

“I was very intrigued by the fact that they were choosing to do it in the smaller space. It was sort of part of my interest was, ‘OK, how the heck is this going to go down?’” Friend said. “I think in many ways what we ended up with is more interesting and fun and creative than what we would have had with a thousand-dollar budget.”

His favorite fight, one of the four multi-minute sequences set to music, involves Agnes fighting a gelatinous cube that turns into her boyfriend Miles, played by senior Liam Sweeney. To form the cube, six people move in formation under a costume of off-white cloth and sticks.

“That’s the fight where I just went full-on matrix. They’re doing a lot of karate, she’s having people lift her so she can do flying kicks,” Friend said. “What’s great about it, that I was really proud of, is I have her kick him, and he flies into the cube, and the cube shatters into a bunch of actors who turn into copies of him, and then they have a doppelganger fight … It’s really over the top.”

Sweeney said the cube was one of his favorite parts of the show, but he was a little sorry his character wasn’t more involved in the “Dungeons and Dragons” world.

“[Miles is] just very narrow-minded compared to everyone else in the game,” Sweeney said. “Everyone else is open to the adventure and the fantasy while he just kind of lives in this, kind of the way that Agnes was at the beginning of the show.”

Sweeney hadn’t read the play before Main Stage announced it would produce it, but when he heard it was about “Dungeons and Dragons,” he was immediately interested.

“I used to play ‘Dungeons and Dragons’ in middle school, but that was for a brief period … like anybody else, I’m into graphic novels, I watch a lot of ‘Dr. Who,’ ‘Lord of the Rings,’ fantasy stuff. It’s a lot of fun, but never have I thought about a show being based on it,” he said.

“I think it provides context to them as to why all these characters, whether it’s Chuck or Tilly or even the members of the ensemble involved in the D&D world, why everyone takes so much joy in it, because it provides a fun escape,” Champion said. “You get to really and truly be this epic, mythical character of your own creation. I think that was fun for some people to discover.”

Sweeney said overall, the play is about accepting oneself and others.

“Dungeons and Dragons is just a fun escape from reality, and the play really shows how it empowers people … It’s OK to be a nerd, it’s OK to like the things you like and do the things you do. Never let anyone judge you, and reach out to people.”