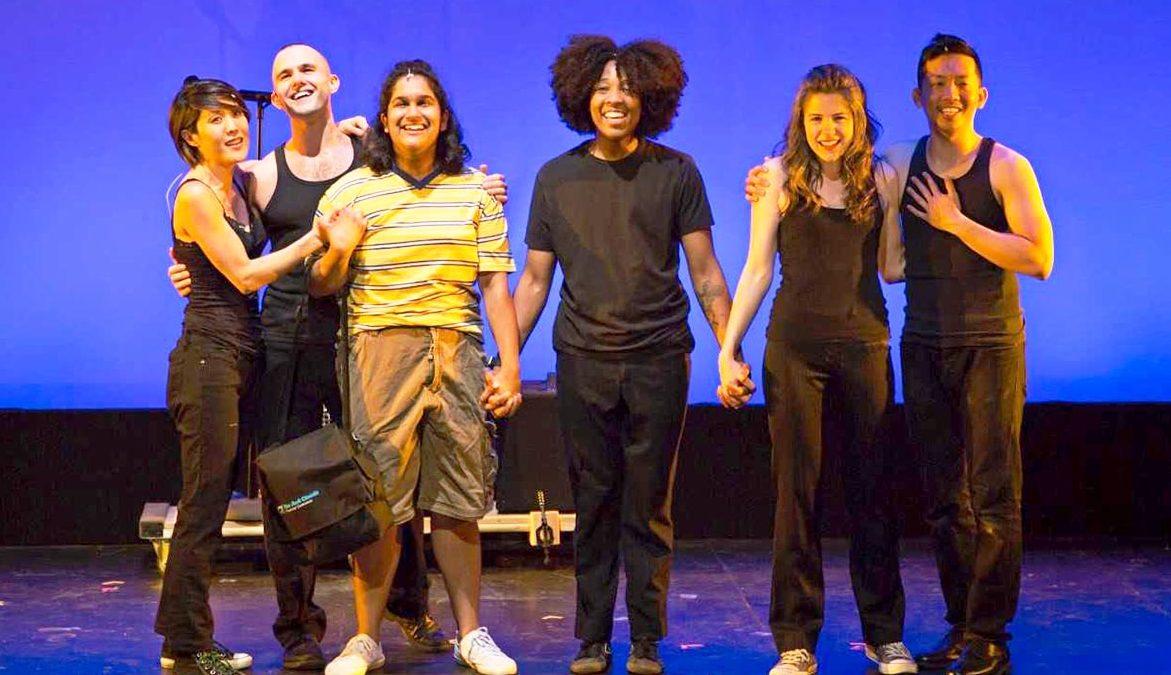 Courtesy of Edward Morris
Cast members of "Interstate" stand onstage during a musical number. "Interstate" is about two queer Asian American artists, Adrian and Dash, as they form a band and tour the United States.
By Kara Bowen — Life and Culture Editor
Published: August 28, 2018

Ithaca College junior Sushma Saha wasn’t at the awards ceremony of the New York Musical Festival when they won the award for Outstanding Performance in a Leading Role. Actually, they didn’t even know they were nominated. When Saha heard the news, they were sitting naked in their bedroom.

While the awards ceremony was taking place, Saha was sitting in their bedroom in Pennsylvania, without clothes on, listening to jazz and sewing a pair of cutoff shorts. They had FaceTimed into the ceremony and was listening to the award announcements over the phone.

When Saha’s name was called, they said they put a blanket on their chest to look “decent” as the phone was handed to the hosts of the ceremony. Saha could see the crowd waving at them. After their acceptance, the phone was passed to cast and crew members. The phone ran out of battery as they were saying goodbye, leaving Saha back in their room, alone, jazz music still playing.

“It was an incredible thing, but it happened in one of those humble ways, in a sense,” Saha said. “Like, I’m still here. I’m still sewing. I’m still naked.”

Saha received the award for a role they performed over the summer in an original musical called “Interstate,” which was a part of the New York Musical Festival. “Interstate” follows two Asian-American artists: transgender spoken word artist Dash and lesbian singer-songwriter Adrian. The two best friends decided to form a band and tour the United States. The plot was based on the lives of co-writers and composers Melissa Li and Kit Yan. Yan is a spoken word artist, Li is a singer-songwriter, and both identify as queer Asian Americans. In 2008, the two formed the band Good Asian Driver and spent two years touring the U.S.

Saha portrayed the transgender teenager Henry, who discovers the band, the internet and his own gender identity while miles away in small-town Kentucky. Saha learned about the musical from an email they received from the Department of Theatre Arts. The casting description was for someone who was South Asian, young, queer and could sing soprano. Li herself had sent the description to every theater program she could find — casting directors had told her the role would be difficult to cast.

“To read the casting call like that, it blew me away because for the first time I felt like there’s a role written for me, and I’ve never really felt that before,” Saha said. “So to see that I could play someone who was young, queer and Indian was rare, and I knew that if I didn’t audition, I would regret it for the rest of my life.”

Saha said the leading role of Henry was different from the roles they are usually offered. They said that although they’ve played leads in the past, the typical roles for people of color tend to be secondary characters — the parents, sidekicks or vocal feature roles. So when Saha can represent members of their community in roles that don’t follow this pattern, it’s exciting for them. They said that their role as Mary Poppins in high school attracted Indian audience members that may not have come otherwise.

“That was cool, to see Indians in my community come to see the show who didn’t often come to see musical theater before … to have a community see themselves onstage for the first time,” Saha said.

Saha said “Interstate” shows how Asian and queer identities combine. They said most musicals focus on the experiences of people who are queer or people of color. Rarely are there shows where characters are both queer and nonwhite.

“We exist too, and our stories deserve to be told,” they said.

Fok also said having a show that featured Asian Americans was meaningful. She said because she identifies as Asian and queer, the environment was so welcoming that she wanted to spend as much time at rehearsal as possible.

“A lot of the shows that I work on typically, recently, I’m really the only minority, Fok said. “Like I’m the only person of color in the show, for good and for bad. So being around other queer Asian artists and nonqueer artists, it just felt really …. like a welcoming space, and I just felt really validated as well.”

The cast and crew worked on “Interstate” for five weeks, which is shorter than the usual length of time dedicated to original musicals. Technical rehearsals at the New York Musical Festival occur the same day as opening night, whereas average technical rehearsals last for a full week. Fok said the length of time was “insane,” while Saha and associate lighting designer Nicholas Palatella ’18 both called it “crazy.”

“It seems like a crazy feat — it is a crazy feat,” Palatella said. “It’s absolutely nuts … from the moment we walked in the theater we hit the ground running, and we didn’t stop until we were basically kicked out of the theater.”

Fok and Palatella were assisted in lighting by sophomore Sarah Mars. After one day of technical rehearsal, “Interstate” opened July 9. It then ran from July 12 to July 15. The awards ceremony for the festival was Aug. 6.

Saha said that their fellow cast member, Esco Jouléy, told them that the Outstanding Performance in a Leading Role award was bigger than them: it was for queer people of color.“It’s for all those kids I got to meet after the show who were crying, who were thanking me, who said they felt seen and heard for the first time,” Saha said. “And the experience in itself reminded me why I do theater, but the award was a reminder to keep doing what I love and to never stop working and learning.”

Theatre group to bring play on identities to Ithaca College