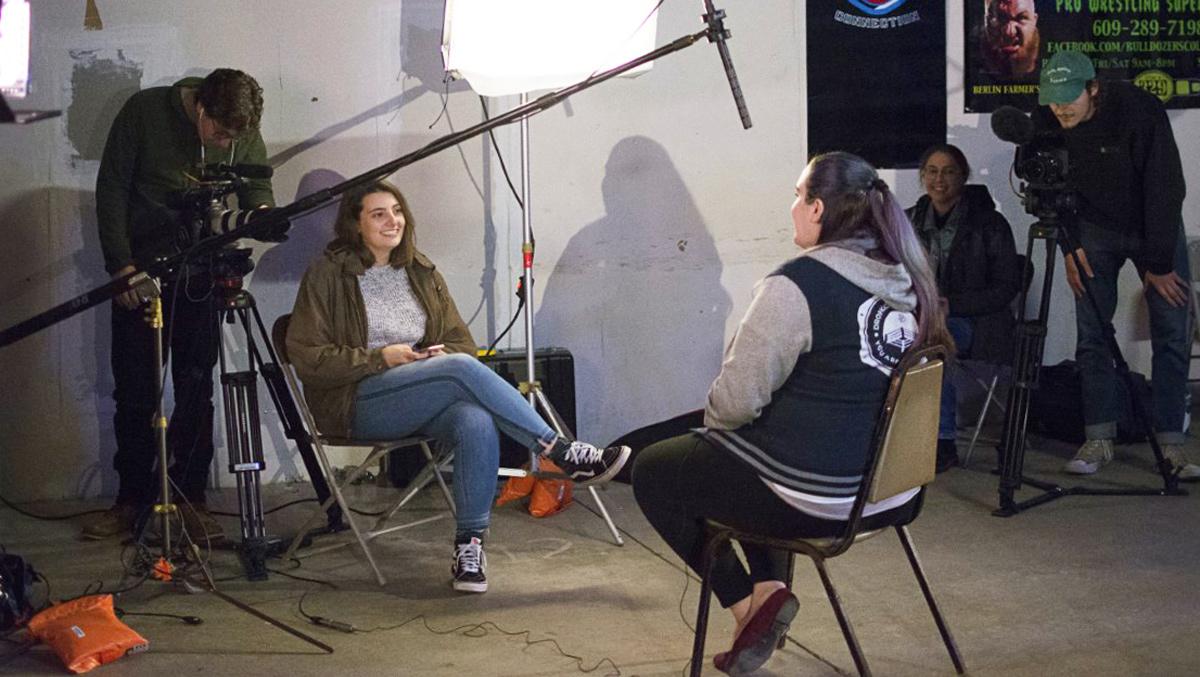 On an October night in 2018, a woman in a shiny black leotard stood inside a homemade wrestling ring with blood dripping down her face and streaking her blue face paint as she surveyed her opponent.

This was not a typical street fight. It was a deathmatch: A wrestling match in which competitors fight with barbed wire and hit each other with chairs, taking prematch Tylenol to encourage blood flow. Deathmatches are a staple in the world of underground wrestling, and the woman in the ring was Terra Calaway — Samantha Cohen’s wrestling persona and the subject of the documentary “Queen of the Dinosaurs: A Wrestler’s Story.”

Before landing on the topic for “Queen of the Dinosaurs,” the production team was stumped for a topic. Senior Audrey Warner, Steven Stewart ’19, Addison Dlott ’19, Unagh Frank ’19 and Jakob Markwardt ’19 had pitched over 200 topics to Ben Crane, associate professor in the Department of Media Arts, Sciences and Studies, including a film focusing on uranium mining in Arizona and New Mexico. The others were not approved and, Warner said, lacked a storyline.

Stewart read The New York Times article “Inside the Ring of Underground Wrestling” and got the idea to cover underground wrestling. The team began researching the topic through YouTube videos and documentaries and pitched their topic to Crane. After it was approved, the students made plans to attend a match. The group split in two, with some going to venues in Brooklyn and others going to venues in Staten Island, to search for a main character to feature in the documentary.

Warner and Dlott went to Staten Island, where they met their soon-to-be subject, Cohen. They were looking for a female wrestler who participated in intergender wrestling and who was a survivor of intimate partner violence. Warner said they went with this concept because it could connect to a bigger issue in society, intimate partner violence, and offer a compelling storyline. At the match, the team told a group of wrestlers what kind of person they were looking for.

Cohen also attended the same match as Warner and Dlott, not in the ring, but as a fan. Dlott said she approached Cohen and asked if she knew anyone who fit the profile they were looking for. Cohen said that she had written a memoir on her experience as a survivor, did intergender matches and would love to talk to them.

“She invited us down for a match the next weekend, and that was our life for the next two months,” Warner said.

From the beginning of October through the end of November, the team traveled every weekend down to New Jersey, Virginia, Staten Island or Maryland following Cohen to matches. The group filmed her fights and also spoke to her in her dressing room and at her home.

Dlott said that at one point, Stewart and Markwardt wore safety goggles while filming to protect themselves from the spraying blood and would sometimes emerge after a match with glass in their hair. Dlott said that the first weekend was traumatizing but that she became used to the environment after weeks of shooting.

As well as filming matches, the team spent their time getting to know Cohen’s story. Cohen has been wrestling for a while, but used wrestling as a coping mechanism after she suffered under intimate partner violence. Her struggles impacted her mental health to the point of attempting suicide. She said in the documentary that through her wrestling persona Terra Calaway, she was able to feel confident and deal with her daily struggle of depression and anxiety.

“I feel very thankful for Samantha for opening up about her mental health,” Dlott said. “Talking about a suicide attempt on camera is extremely difficult, and I think it’s important for people across the spectrum, whether you like wrestling or don’t like wrestling.”

Warner said the team intended for the documentary to connect to the wider topic of intergender wrestling, but as they got to know Cohen and built a relationship with her, the final product became more of a profile piece.

“Based on what we had collected, we said, ‘Well, this is a story of a really strong, beautiful woman who is in pain and deals with her share of mental illness,’” Dlott said. “However, she finds it to be cathartic and empowering for her to be in that ring, and that’s our story. This is Samantha Cohen’s story, and we thank her immensely for letting us help her tell it.”

Crane said this level of access and intimacy with Cohen made “Queen of the Dinosaurs” stand out from other documentaries that were produced in Documentary Workshop.

“She was eventually willing to share a lot of very intimate, sensitive details from her life and be willing to have that appear on screen,” Crane said. “And not every group is able to achieve that kind of access, or have a character that is as colorful or as interesting as our character in this film.”