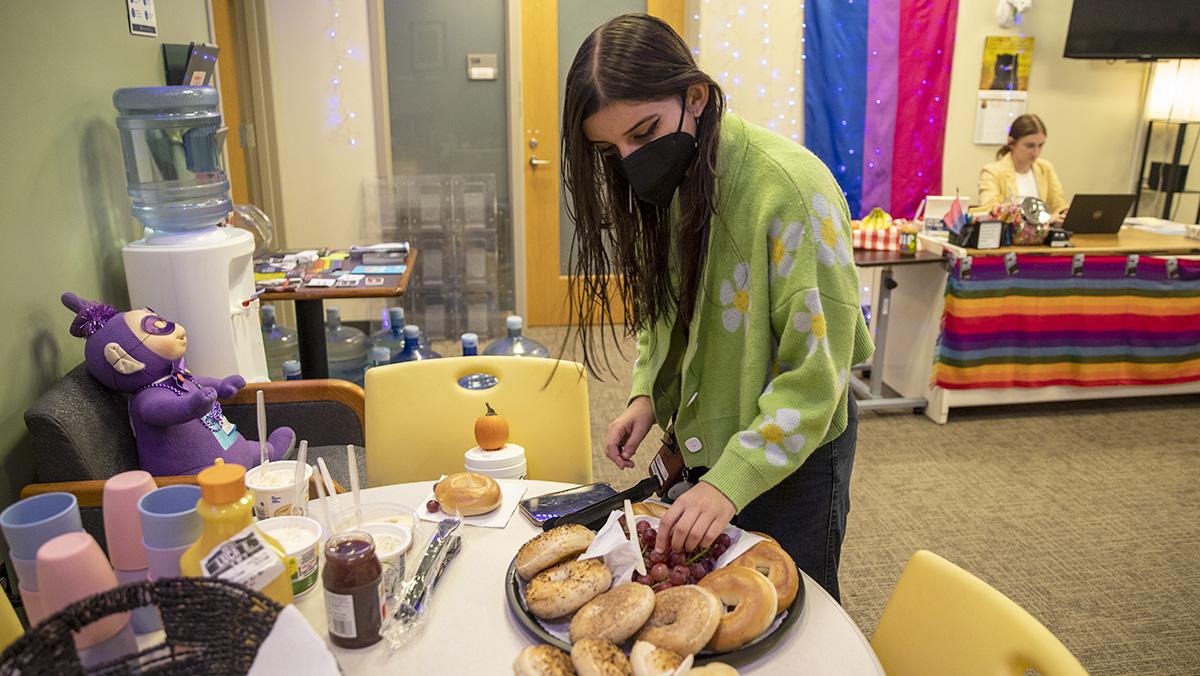 The sounds of the crisp crunch of bagels filled the hallway of Towers Concourse on Sept. 21 as students gathered for a Bi Bagel Brunch, hosted by the Center for LGBT Education, Outreach and Services in honor of Bisexual Awareness Week (BAW).

The internationally recognized week, observed from Sept. 16–23, aims to celebrate the visibility of bisexual people, as well as highlight issues that the community goes through.

Several members of the campus community expressed how vital BAW was to them and shared very similar sentiments about why this week is something to celebrate.

Senior Khami Auerbach said BAW was very important to them in affirming their identity.

“Weirdly enough, you would think at this point people would accept that bisexual people exist, but there’s still this sort of weird thing where people are like, ‘no, you have to choose one,’ and there’s so many people out there that are bi[sexual], at this point its, like, … you can’t really ignore it,” Auerbach said.

Auerbach, along with other student attendees, cited this as their main reason for coming, believing awareness weeks like this help combat issues like bisexual erasure, which is the tendency to ignore or remove bisexuality in the disucssion of sexuality, and biphobia, which is prejudice against bisexual people. Many students have experienced many different instances of people claiming that bisexual people have to “pick a side” or that bisexuality is a stepping stone to becoming gay.

First-year student Alexis Troncone said that even beyond issues of explicit biphobia, there are often misconceptions that are associated with bisexuality.

For senior Abby Damouras, participating in an event like the Bi Bagel Brunch is something she said can be very important for people who identify as bisexual because it provides a way for students to celebrate their identities.

“I think it’s important to highlight each individual identity it affects, like, you as a person, your identity is really important to you, the way that you label yourself is important,” Damouras said.

The topic of bisexual awareness week was the main focus of attendees during the event. Many students gathered in the common space of the LGBT Center to talk about their experiences, why they were there and just to get to know each other.

Many of the students who attended had not been to the center or had yet to visit it in the new location, on the first level of Towers Concourse, where it relocated to in Fall 2021. First-year students expressed the fact that they had heard about the center and its events but had not attended one until the brunch Sept. 21, and students like Auerbach said they had attended events in their first year when the center was located in Hammond Health Center but had not been to anything since.

Grace Dosdall, Ithaca College’s LGBTQ Pride Fellow, served as the sponsor for this event. The college’s newly launched Pride Fellowship aims to allow recent graduates to gain experience working in LGBTQ+ advocacy in higher education as well as student affairs throughout the college, while also acting as a resource for students in times of need via the LGBT Center.

“There can be such a stigma around the identity, right?” Dosdall said. “Like thinking someone who is bisexual is more likely to cheat, … they are more sexual, and none of that is true.”

When coming up with the name for the event, Dosdall said they were drawn to alliteration, joking that celebrating bisexuality with bagels would be a fun event. Dosdall said they would support hosting similar events in the future.

While the center provides a wide variety of resources to the student body, Dosdall said they think the most important one is just the presence of a center and the ability to work with students one-on-one — noting how each student has different needs.

Dosdall also mentioned the center’s plans for National Coming Out Day on Oct. 11. The celebration will include guest speakers and other festivities to be announced. The center will also host events for LGBT History Month in October, but the details have not been made public. Other resources the center provides are the presence of the Open Pages Residential Learning Community, which is for students who do not identify as cisgender to live with one another in a shared space, as well as the addition of gender neutral bathrooms around campus.