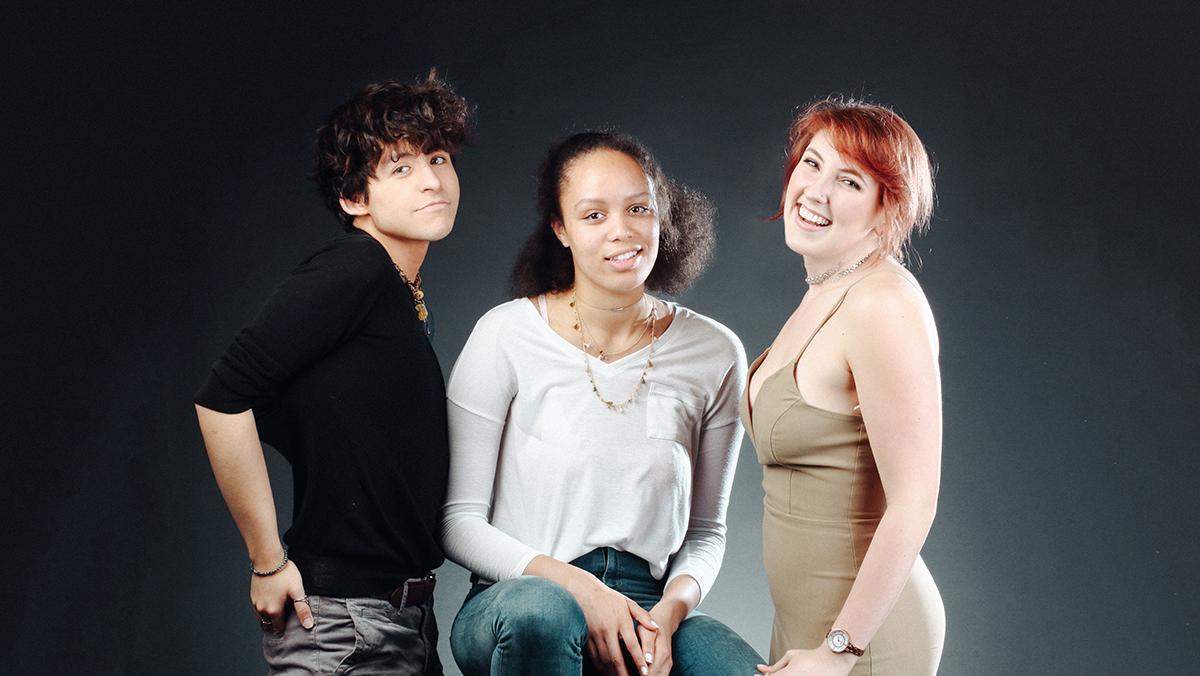 Courtesy of the Passion Project
From left, sophomores Mori Pericon, Kylee Roberts and Annalise Haldeman launched the Passion Project on March 31. The theme of the magazine this month is New Beginnings.
By Brianna Ruback — Staff Writer
Published: April 4, 2017

“Seriously, we can’t deal with boring people. We need the ones that stay up all night just to watch the sunrise. The ones who will probably eat cake for breakfast and jam out to 80s classics. The positive, loving and funky game changers who are undeniably themselves.”

This is the description in the recruitment section of the new website of the Passion Project, an alternative fashion publication dedicated to self-empowerment, embracing youth culture, inspiration and social issues within and beyond the Ithaca College campus.

Two students with a passion for social issues sparked the idea for the online-only publication.

After conceptualizing an alternative fashion magazine that focuses on self-expression, sophomore Annalise Haldeman sent a text message in mid-March 2016 to her classmate sophomore Kylee Roberts to see if she wanted to get involved.

“I just kind of sent her a text and was like, ‘Um, so I have this really kind of outlandish idea of creating a magazine. Do you want to join me?’” Haldeman said.

After Roberts agreed to start up the magazine almost a year ago, approximately 25 people have become involved in the Passion Project, including writers, designers, photo editors, photographers and visual artists. The magazine officially launched its website March 31. Content is uploaded onto Facebook through the organization’s website.

The publication’s play-on-words title references Roberts’ and Haldeman’s enthusiasm for social issues and points out that the publication was the duo’s creative side project.

When Haldeman came to the college as a freshman, she said, she didn’t feel like she fit in anywhere in terms of extracurricular activities but knew she had a passion for fashion and social justice. The idea for the publication came to Haldeman when she realized there were no fashion magazines targeting college students that emphasized social issues, she said.

“I really enjoy wearing really cool things and learning about the fashion world, but none of it had that … more of a social–justice tie to it, and that was really important to me,” Haldeman said.

The Passion Project’s content will fall under a theme that changes monthly. New Beginnings, this month’s theme, focuses on ever-changing youth culture. Shifting one’s gender identity, up-and-coming clothing companies and student experiences are the topics of some of this month’s articles.

Some other topics Haldeman said she hopes to include in the magazine are immigration, the textile industry’s impact on the environment and gender issues — specifically, the wage gap and workplace discrimination. Through these issues, Haldeman plans to hone in on societal conflicts.

Haldeman said through the Passion Project, many people can have a voice within fashion, specifically marginalized groups.

“I think, oftentimes, it is a very whitewashed world, especially in the United States,” she said. “I just think that is just not realistic at all. Fashion is something that anyone and everyone can be a part of. So we’re very much wanting to get voices from a diverse group of people, whatever that means — sexuality, gender, religion, whatever.”

The members of the Passion Project create content through articles, photo editorials and artwork that stresses inclusion by portraying people of different ethnicities.

As a woman of color, Roberts said it’s important to her that the Passion Project highlights all people because marginalized groups are often underrepresented.

“As I was growing up, I never saw people like me in magazines,” Roberts said. “I’m a sociology minor, and we’re reading a lot more about [a lack of representation], and it’s a lot more harming than people realize. … That they’re not being represented in these magazines and they think that what they look like is wrong. It’s just not true. There are a lot of unique faces that we’re not seeing.”

Haldeman said that in the future, the Passion Project will probably break off from being an Ithaca College publication and that it was originally intended to be for multiple college campuses.

Focusing on the millennial generation was one of Haldeman’s main objectives when starting the publication.

“Our college age group needs something like this,” Haldeman said. “Vogue doesn’t quite speak to us. We’re out of kid magazines. So … where does our age group lie?”

Katie Marks, assistant professor of writing and adviser for the Passion Project, said she thinks the magazine will be an exciting opportunity for people to express themselves creatively.

“The title kind of speaks for itself in terms of what their aim is,” Marks said. “They’re really hoping to … inspire and cultivate passion in the Ithaca College environment.”

Marks serves as a support system for Haldeman and Roberts, streamlining the publication’s vision and helping with staff-related issues.

“I think their vision and their goal is to really create a space for this alternative kind of fashion magazine,” Marks said. “Talking about DIY culture, getting people excited about expressing themselves, both in terms of their appearance but also in terms of the arts and music … I think it’s a pretty three-dimensional approach and goal.”

Haldeman said she hopes those who often feel excluded will find solace in the Passion Project community.

“I think that people should know that there’s always a place for them when it comes to fashion and to not feel like they’re excluded,” Haldeman said. “I think we’re pushing for a place where people can feel like they can express themselves in the best way they can.”

The Passion Project meets at 8 p.m. every Monday in Park 281.