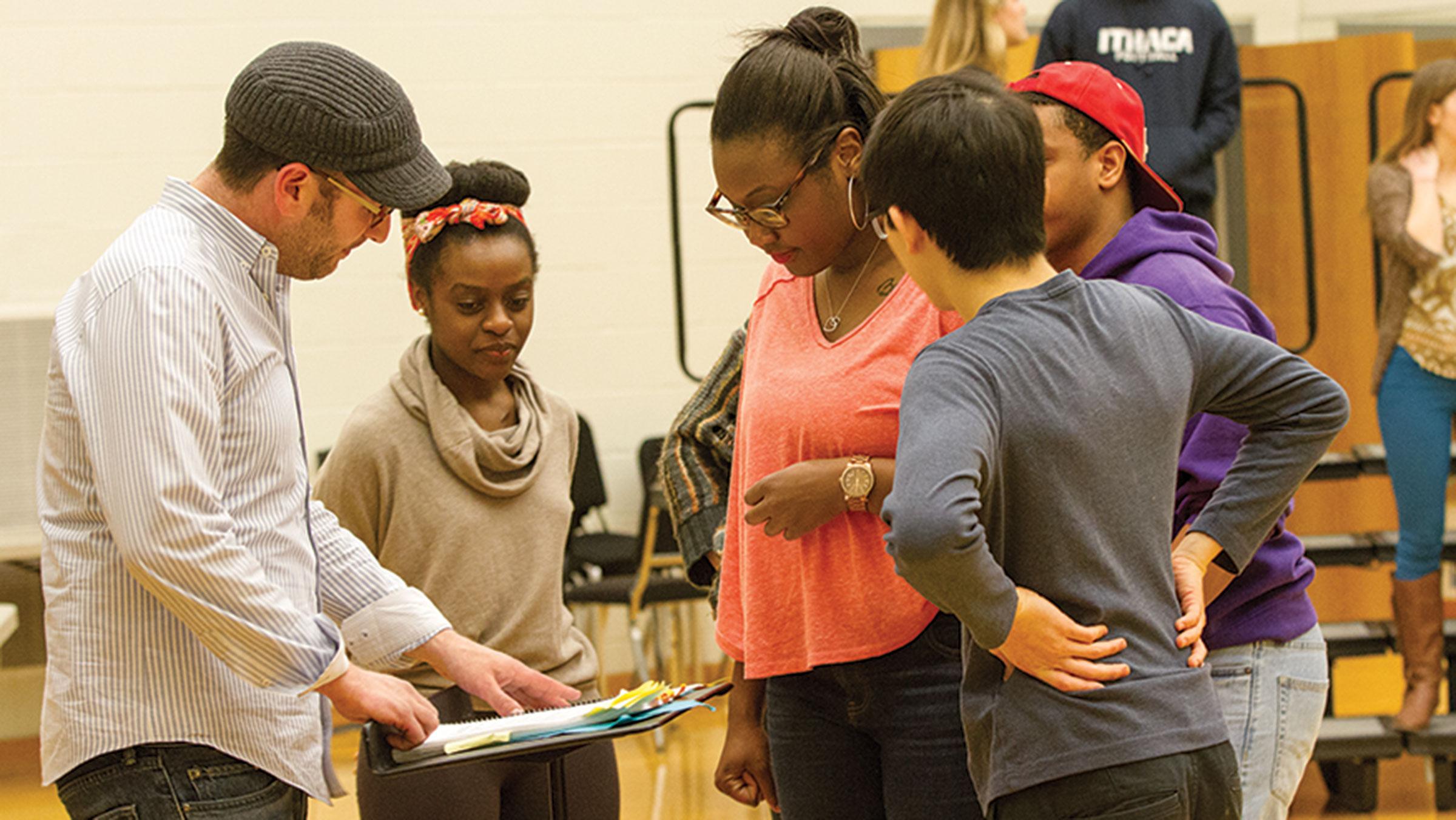 In the James J. Whalen Center for Music, Ithaca College’s opera workshop class is hard at work rehearsing for its upcoming performance. Its task, however, goes far beyond song and dance: using music and motion, the group will expose the largely unknown story of one of America’s Founding Fathers, including its underlying race relations that carry through to the modern day.

With a score composed by Dana Wilson, professor of music at the college, the new opera, “The Wolf By the Ears,” tells the story of Thomas Jefferson’s extramarital relationship with his slave Sally Hemings. Produced by students and faculty from the opera workshop class in the School of Music, with support from the theater department, Opera Ithaca and IC Light Opera, its first and only performance will take place at 8:15 p.m. April 8 in Ford Hall in the Center for Music. The following day, a discussion of the opera at 3 p.m. in Beeler Hall in the Center for Music will explore students’ reactions to the piece and place it in the context of the modern day.

Wilson has been working on “The Wolf by the Ears” for over a decade, ever since it was first discovered through DNA testing that Thomas Jefferson had fathered six children by Sally Hemings. According to Ithaca College’s website, the opera was first produced in 2011 with a workshopped selection of arias and scenes, then put on as a staged reading the following year. This production is both the first full-fledged performance of “The Wolf by the Ears” in its entirety and the first time the opera workshop class has tackled an original full-length piece.

Brian DeMaris, professor of music and the musical director, has been working with Stage Director David Lefkowich from the very first stages of the production of “The Wolf By the Ears.”

“This opera’s been a long time coming, and it’s the first time the opera workshop class will be performing a world premiere of an opera,” DeMaris said. “This opera in particular offers an educational piece. It teaches us about Jefferson and about the racial turmoil in our past that’s still present today. It really lends itself to outreach to the community.”

In this production, Sally Hemings will be played by Cherisse Williams, a second-year vocal performance graduate student. She said at its core, the opera is a love story between Thomas Jefferson and Sally Hemings. However, it also deals with racial tensions that are inherent in American history and that aren’t often talked about outright.

“Back then it wasn’t uncommon for slave masters to sleep with their slaves,” Williams said. “Sleeping with your slave like that was something that wasn’t talked about. Everyone knew it was going on but it was just very taboo.”

“The Wolf by the Ears,” however, approaches the subject with soaring arias, duets and choral numbers that firmly brush the story out from under the rug and into the spotlight. The music is modern, but incorporates elements of its 18th-century setting, including slave spirituals and fiddle motifs inspired by Thomas Jefferson’s accomplishments as a violinist.

Rather than adding drama for drama’s sake as many operas do, Wilson said he did his best to stay true to the history, and he was sure to include many of Thomas Jefferson’s political actions, historical events like the French Revolution and characters like Benjamin Franklin and John Adams.

“The title of the opera actually comes from something Jefferson said, which was, ‘Slavery is like the wolf we have by the ears: You can’t hold onto it forever, and you can’t let it go (sic),’” Wilson said.

Additionally, the themes of the opera can be easily applied to current events. DeMaris said he knew it was time to produce “The Wolf by the Ears” when the death of Michael Brown and subsequent protests in Ferguson, Missouri, became national news. Williams said when she read through the the libretto, she immediately identified with the struggles Sally Hemings faced.

“At first I thought it would have been a challenge for me, but as I researched, I started realizing that Sally and I are not as different as I thought we would have been,” Williams said. “I can definitely relate to her being a woman of color, and being treated as separate, but equal, but not actually equal. I know what it’s like to feel racism. I definitely know what it’s like to feel like you don’t belong even though you should.”

Zachary James ’05 is the director of Opera Ithaca, a new opera organization that aims to bring opera to the town. James plays Thomas Jefferson in “The Wolf by the Ears,” reprising his role from both prior workshops of the piece. He said he hopes the opera will make the art form more accessible to the general population due to its both historical intrigue and its relevance many modern-day experiences.

“It’s a part of our history as a nation,” James said. “When you really think about it, it’s not that distant in our history. We are still a young nation in the history of the world, and I think it’s really important to remember that these things happened just a little while ago, and that even in the past hundred years and still to this day we’re dealing with racial relations.”