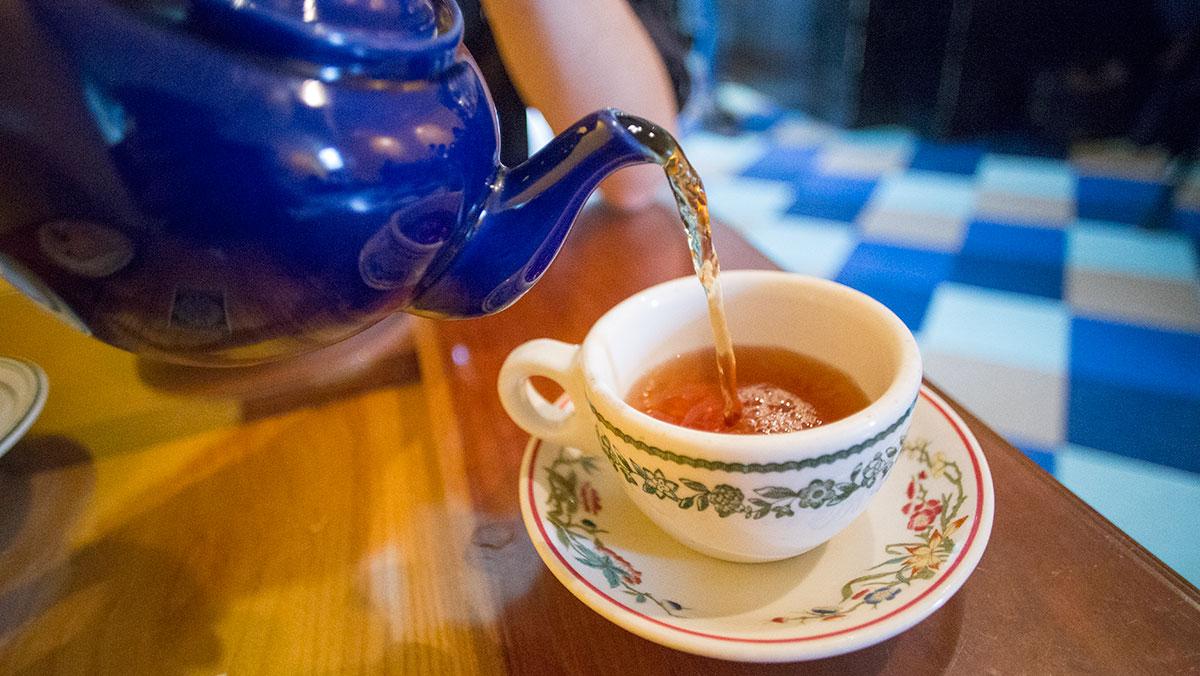 Tea has been a staple drink throughout history and is still an integral part of many cultures today. In the United States, the specialty tea market has been on the rise since the early ’90s, paving the way for new stores and businesses. Caravan Serai Tea, a recently opened shop on The Commons, sells exotic teas from almost every continent, encouraging customers to try teas that are unfamiliar to most Americans but are everyday drinks in their countries of origin.

Christopher Bonn is the founder and owner of Caravan Serai Tea. After serving 10 years with the New York City Fire Department, Bonn traveled to Thailand where he stayed for a year. While in Thailand, he met tea farmers and grew familiar with the cultural importance of tea in that region.

“Tea isn’t just Earl Grey or English Breakfast,” Bonn said. “I saw a lot of different teas there, and I wanted to replicate that here.”

Bonn’s menu carries teas from almost every continent. They can be bought as prepared, on-the-go drinks or in loose-leaf form by the ounce. In addition to teas, Caravan Serai Tea sells tea accessories and products, including traditional teapots and decor from the teas’ countries of origin.

The majority of the teas sold at Caravan Serai come from India and China, which is no surprise considering the richness of tea culture there. The Tea Association of the USA said for thousands of years, tea has been grown and used daily in those regions, both for its healing properties in times of illness and as a symbol of comfort and home in times of prosperity. British colonization of these regions inspired the familiar English affinity for tea, which remains a pillar of its traditions today.

Hong Li, professor of Chinese language at Ithaca College, said tea’s importance in China spread around the world through trade.

“Tea is the symbol of China,” Li said. “We domesticated the plants and cultivated the plants. When the British came to our shores and to the shores of India, they started to drink tea as well.”

Meanwhile, Americans had markedly different beverage habits. At the outset of the Revolutionary War, American colonists famously dumped tea overboard into Boston Harbor to protest taxes. Afterward, according to the Boston Tea Party Historical Society, John Adams called for all colonists to give up tea and switch to coffee instead: “Tea must be universally renounced. It must be weaned, and the sooner, the better.” It was soon considered unpatriotic to serve tea, and if it really was a necessity, foreign teas were rarely used because of their expense during wartime. Local herbs and dandelion greens were brewed instead. By the time the Constitution was signed, America had sheared itself away from the rest of tea culture.

However, in the past two decades or so, tea culture in the United States has been developing significantly. The Sunday Times reported that the American market for tea quadrupled from 1993–2008, led by specialty tea companies like Teavana and Mighty Leaf, who began to make foreign teas available to the American consumer. Around the same time, companies such as Argo Tea and the Republic of Tea worked to make international teas more accessible by using the Internet to connect customers with their ideal tea drink. Additionally, Starbucks created and popularized its Tazo tea line, which draws inspiration from a spread of cultural teas. Li also pointed out that Wegmans recently added a new line of loose-leaf teas to promote traditional Chinese tea methods. The modern American tea culture is also perpetuated locally by shops like the Old Tea House, the Shop Cafe and the Mate Factor.

Molly Astrove, a sophomore integrated marketing communications major, is doing research about the tea market for her advertising class this semester. Her group is working on a marketing strategy for Tazo tea.

“Brands like Tazo and stores like Teavana can be more intimidating for people who don’t know a lot about tea,” Astrove said. “Young people are getting more into tea culture and exploring more tea varieties, especially for its health benefits.”

Tea is known to be loaded with antioxidants and other vitamins that help boost the immune system. Astrove said her research found a parallel between the increasing market for health products and increasing interest in tea.

The vast majority of the world’s tea is still produced outside of the United States, and imported tea brings directly along with it the flavors and traditions of other cultures. At Caravan Serai Tea, Bonn works hard to keep his teas authentic to their growers. He gets the tea straight from its country of origin and doesn’t process it or even put it into tea bags. All of his teas are fair-trade, and some are purchased directly from those who farm them.

“We have a lot of tea you can’t get anywhere else and will be adding more soon,” Bonn said. “More people are realizing there is tons of variety in tea.”

Astrove stressed that America’s awareness of other cultures through tea benefits both parties and said her research showed Tazo makes an effort to give back to the communities from which their teas are derived.

“They do a lot of corporate-responsibility campaigns in India where their tea is made and provide scholarships and training for areas outside the tea market,” Astrove said. “They definitely care about where the tea is coming from.”

Similarly, Bonn hopes to expand his line, franchise his store and eventually save up enough to start a tea farm in northern Thailand.

As tea culture in America continues to grow, Caravan Serai Tea works to ensure that the cultural and emotional significance of their products shines through.

“Tea brings people together, cheers them, comforts them, warms them and enlightens them,” Bonn said. “That’s what Caravan Serai Tea is about: bringing people and their cultures together, one cup at a time.”