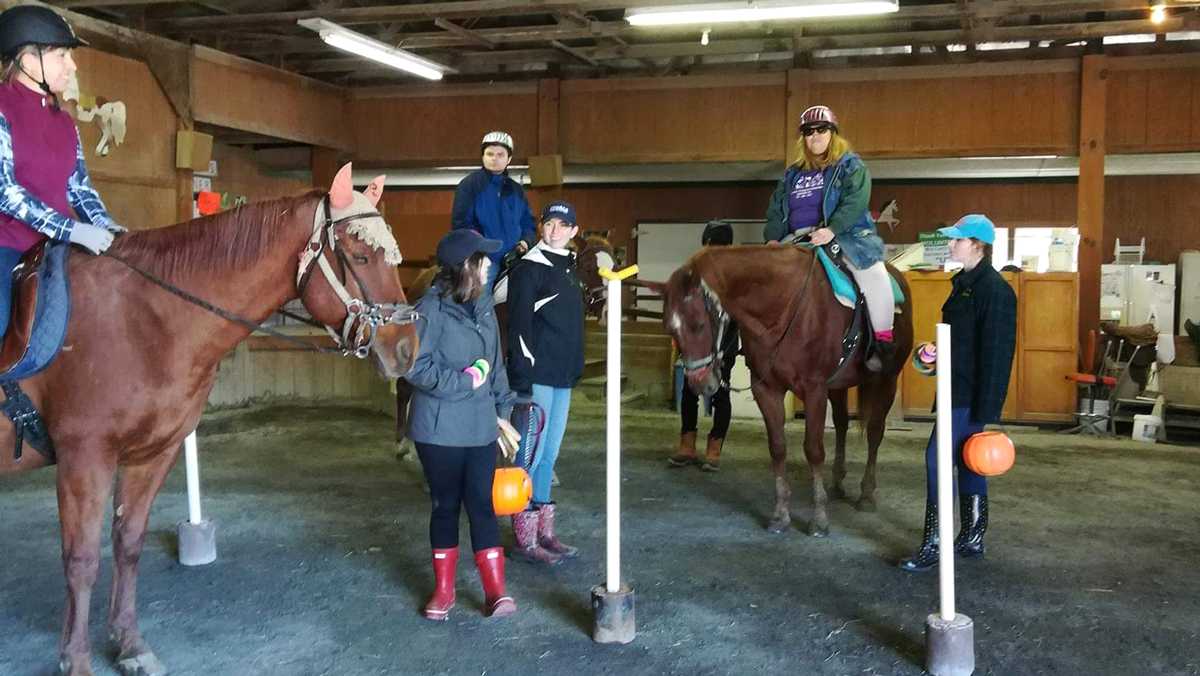 While most Ithaca College students were asleep at home during fall break, junior Lucy Hemingway was shoveling horse poop.

Hemingway is one of the 10 students from the college who chose to spend their fall break doing community service. Rather than go home, sleep excessively and eat home-cooked meals, she and three other students traveled to Grantville, Pennsylvania, to volunteer at a therapeutic riding barn. While they were in Grantville, six other students traveled to Buffalo, New York, to volunteer at a food bank and a refugee center. 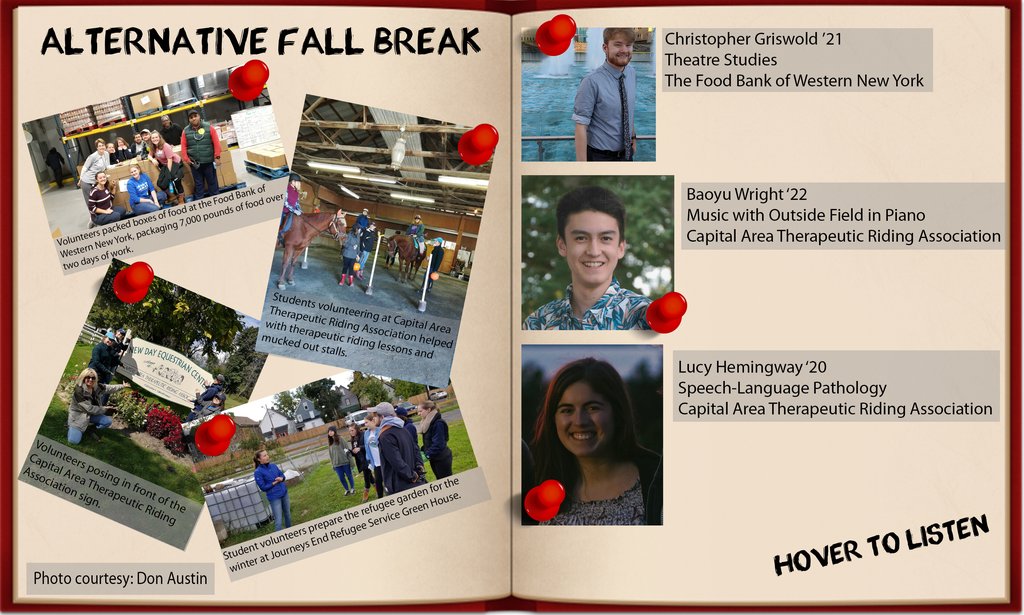 These two trips were a part of the Alternative Break Program. The program is run by Don Austin, assistant director of community service in the Office for Student Engagement, and is an opportunity for students to travel and do community service at little cost. The students only have to pay a deposit to secure their spot on the trip, while the college covers transportation, housing and food.

“It’s an immersion program that gives students a wider view of what service is and what community is, and how we build relationships with others based on our time volunteering,” Austin said. 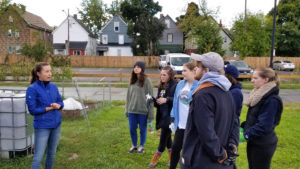 One group of volunteers helped out at a therapeutic riding center by mucking stalls and assisting with lessons. (Courtesy of Don Austin)

The Office of Student Engagement and Multicultural Affairs runs 10 volunteer trips per year: two during fall break, five during spring break and three during summer break, right after finals end. The spring and summer break trips are usually seven or eight days long, and the fall trips last three to four days. Multiple trips are offered each break, and students can choose where to go according to their interests like combating food insecurity and preserving natural environments.

Over fall break, one group traveled to the Capital Area Therapeutic Riding Association, or CATRA, that offers therapeutic riding lessons to help people with their physical, cognitive and emotional well-being through assisted horse riding programs and interactions with horses. As a completely volunteer-run organization, CATRA relies on individual and group volunteers for day-to-day duties like cleaning the barn and running the riding programs. Volunteers with limited experience at horse barns had to learn the system of the barn and how CATRA operates.

“Learning how a barn works was a major thing,” Hemingway said. “Seeing how each thing we did — it connected to something else. By cleaning one stable, they could bring the horses in, then they could eat. It’s a whole system they have down.”

The volunteers worked with some older adults and helped by leading the horse, keeping the rider stable and handing the riders games to keep their minds active.

Junior Lauren Bovenzi said her interactions with the riders were memorable experiences.

“One of the people who was riding couldn’t speak, but while he was on the horse, playing the game, he was laughing,” she said. “Laughing is such a pure form of joy, and seeing him was the most rewarding part of my experience.” 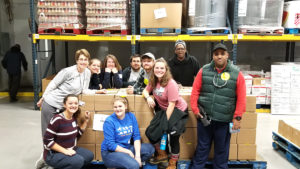 Meanwhile, in Buffalo, six IC students packaged food at the Food Bank of Western New York. Their task was to unpack large boxes of food, like canned fruits and vegetables and cereal, and repackage them into smaller boxes that could be transported. As they worked throughout the day, they watched the pile of finished boxes grow steadily larger. After nine hours of work over the course of two days, the students packaged 7,000 pounds of food.

Sophomore Christopher Griswold was a student leader on the trip. He organized an orientation prior to the trip and prompted self-reflections at the end of each day.

Griswold said that working at the food bank opened everyone’s eyes to the limitations of the organization and broader issues in American society. The nutritional value of the food they packaged was not always very good, and despite the good intentions of all the volunteers and the people who run the food bank, they have limitations on what they can serve.

“There were moments in the day where we would be packaging 6-pound boxes of Fruit Gushers for two hours,” Griswold said. “If that’s somebody’s food for the day that they’re getting from a food pantry … these organizations are amazing, but you see how many limitations they still have. And it sucks. You feel like you can’t do enough.”

After two days at the food bank, the group volunteered at Journey’s End Refugee Services, an organization that helps refugees with relocating, education and employment. The student volunteers cleaned out the gardens and greenhouse that refugees use to grow food to sell for extra income.

Being away from home during break was initially difficult for some students, but they found a sense of community quickly. They bonded by cooking breakfast and dinner as a group, talking together in the evening and working as a team during the day.

Bovenzi said she initially wished she was going home to relax at her parents’ house. But once she arrived in Pittsburgh, she said she realized that she would rather be there than sitting around at home not doing anything.

Freshman Hailey Aldrich, who went to Buffalo, knew she wanted to take an alternative fall break before she even arrived in Ithaca.

“It’s in that hump before Thanksgiving where you’re still so new, and if you uproot yourself right now, it could be hard to transition back,” she said. “I wanted to meet more people, do something I already knew that I love and bond with people that had that common interest.”

Even though Aldrich knew she wanted to go on the alternative break, she thought it would be hard to be away from home. She said that instead, the trip changed her perspective.

“The trip made me feel more grounded in my place in campus,” she said. “You don’t necessarily need to be an overachiever in order to give back. We were able to accomplish so much in just a few hours. It doesn’t take a lot to make a big impact.”

Club focuses on food to bring community together