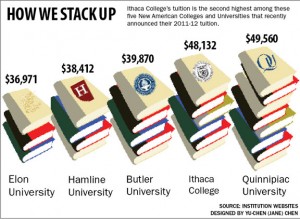 Next year’s total cost of attendance will be $48,132, an increase of 4.76 percent. This is slightly lower than last year’s 4.8 percent increase in total attendance cost and is the lowest percentage of increase in the past nine years.

President Tom Rochon sent out a letter to families following the decision. He promised that the college is doing everything it can to ensure students are getting their money’s worth.

“I believe the budget we have developed reflects our ongoing efforts to control expenses and to implement the lowest possible cost adjustment while continuing to improve the already high quality of an Ithaca College education,” he said in the letter.

The college compared its 2011-12 tuition with the 2010-11 tuition of 20 other private colleges and universities to which it is usually compared. Six colleges listed their tuition — including room and board — for the 2011-12 academic year. The college had the second highest tuition out of the six listed.

Carl Sgrecci, vice president of finance and administration, said the college’s standing among these 20 colleges is not an accurate indication of placement. Instead, he said the college’s cost of attendance should be compared to colleges with high application overlaps.

“Those schools include places like Northeastern, American and Syracuse, and our tuition is $2,000 to $3,000 lower than all of those for the current year, and we expect that differential will continue for next year as well,” he said.

Sgrecci said about 95 percent of the college’s budget comes from tuition.

Programs were not cut by the budget in order to minimize the tuition increase, but some divisions have chosen to reallocate their funds for next year, Sgrecci said. In fact, he said these divisions will have more money available next year than this year.

Freshman Genevieve Cohn said even though this year makes the lowest recorded increase in nine years, she was upset that the school is continuing to raise the tuition at all.

“I guess I should be thankful that the college is making strides to keep the tuition down as best as it can, but I’m still going to end up paying even more money to an already expensive institution,” Cohn said.

Cohn said the college is already hard for many students to afford, and continuing to raise the cost of an education makes it even more difficult.

“I don’t want to keep paying for more and more money every year, and I know my parents won’t want to either,” she said.

Junior Adam Girgenti said he was skeptical of the college’s effort to minimize tuition costs and worries it might result in the college scrimping on funding made available to some programs.

“Although I think it’s a good idea, I’m more interested to see how the college is doing it,” he said. “It seems like a lot of students want to know what they’re not doing in order to make up for the budget.”

Junior Dave Mizzle said he has found it hard to pay for the tuition increases over the years.

“It’s great that this is happening, but I wish it would have happened sooner,” he said. “It’s hard because when you first come to college you expect it to be one price.”

Rochon said the minimized increase in tuition for 2011-12 is not an indication this pattern will continue in future years.

“Although we have developed a multi-year budget projection that foresees continued moderation in the rate of tuition increase, the Board of Trustees adopts a budget each year in response to conditions at that time,” he said.

Rochon said the college must be realistic about its financial situation and acknowledge the fact that it is mainly sustained by tuition.
“As our primary source of revenue, tuition must be increased in order to meet other important budget goals connected with sustaining the spending necessary to offer a high quality education,” he said.

Dave Maley, associate director of media relations, said the college is working diligently to prepare a budget that recognizes and caters to different financial situations.

“The financial aid status of every student is different,” he said. “The college works very hard to target students with the greatest need and is working on new financial aid programs with the assistance of representatives at state and federal levels.”