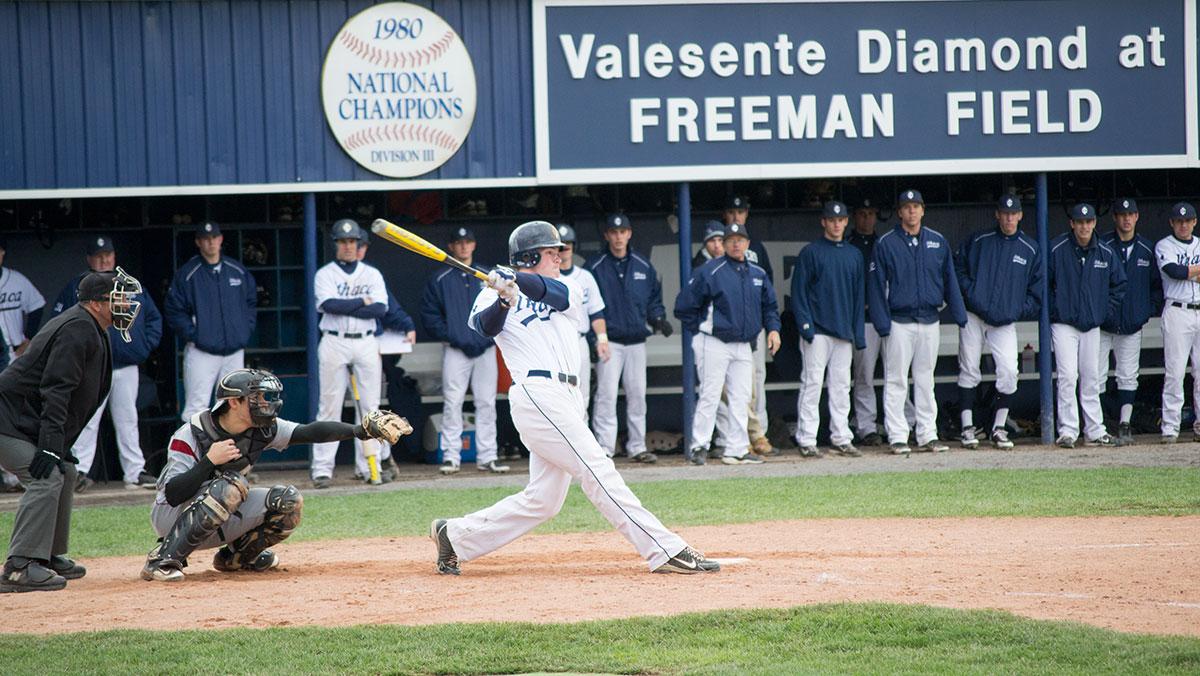 Max Addy ’14 has been described by his friends as a go-getter, hard worker and a best friend to a lot of his peers.

On Nov. 28, the 22-year-old died unexpectedly in his home in Newfield, New York.

Addy graduated from Ithaca College in May with a bachelor of science degree in business administration and a concentration in management.

A year earlier, he reached first base after his first hit at the Division III College Baseball World Series in Appleton, Wisconsin.

Senior Cooper Belyea was there to witness Addy’s moment on the field, and with the recent news on his mind, Belyea looked down at his hands to search for the words to describe it.

“Seeing him smile on first base … it was a lot for me, looking up and seeing his parents who I’ve known my whole life, standing next to my parents and knowing that we had stayed together this whole time,” Belyea said.

Addy played for the college’s baseball team through his junior year, which finished third in the country at the 2013 College World Series.

Belyea, a childhood friend of Addy’s, said they played hockey on the same team as kids and summer baseball together into high school. He said Addy was recruited to both the college and University of Mary Washington for baseball, which is where he went before transferring to Ithaca College after his freshman year.

Addy graduated from Newfield High School in 2010, where he was an athlete and captain of the baseball and basketball teams.

Graduate student Corey Caswell, now an assistant coach on the college’s baseball team, said Addy often played outfield positions at the college and was a designated hitter. On the field, Addy had a hard-working mentality which he spread to his teammates, Caswell said.

“As a player, he was always the one pushing everyone the hardest that they could go,” he said.

He said Addy batted sixth in the lineup, right behind Caswell — they called themselves the “bash brothers,” a reference to “Mighty Ducks,” for the way they played off each other at bat.

“That was always a good thing to have him behind me because that always told me that he had my back no matter what,” Caswell said.

Junior Cameron Oathout said he and Addy always stood together in the dugout, and he remembers being the first one to hug Addy as he ran in from the outfield when they won the World Series game.

“It was a moment of love and passion for the game and for each other as teammates,” he said.

Belyea said Addy wanted to become a third-generation line mechanic in electrical power lines after his father, uncle and grandfather.

“He was very close with his whole family,” he said. “[His brother] looked up to him a lot, and Max loved being a big role model for Cal.”

After graduating from the college, Addy began attending the Southeast Lineman Training Center in Trenton, Georgia, where he was recognized for his performance with a Wood Walker award. Wood walker is the term the program uses for lineman apprentices.

Among Addy’s other passions was making others smile, Belyea said. One of the many ways he said Addy would do so was with his loud voice, recalling their time together in Terrace 13.

“We would get complaints all the time,” he said. “Those walls were way too thin for Max.”

Addy will be buried following a Mass of Christian Burial at 10 a.m. on Dec. 4 at the Immaculate Conception Church, located in downtown Ithaca. In addition, Caswell said Addy’s jersey was hung during the calling hours at the church the night of Dec. 3.

“The biggest thing we try to remember is obviously the positive memories with Max, but also what Max’s mentality would have been in this type of situation,” he said. “If he were here to tell us today, he would tell us … never forget it happened, but just remember the positives and go back out there and get it.”

In memory of Addy, and in exchange of flowers, donations to the Newfield Booster Club will be collected, according to Addy’s obituary in the Ithaca Journal. Bangs Funeral Home is in charge of arrangements.

Belyea said Addy was a people person who loved to brighten up the days of people around him.

“I think if he saw how much of an impact he made on people, he would be very proud of himself, just for how many people he touched and inspired,” he said.