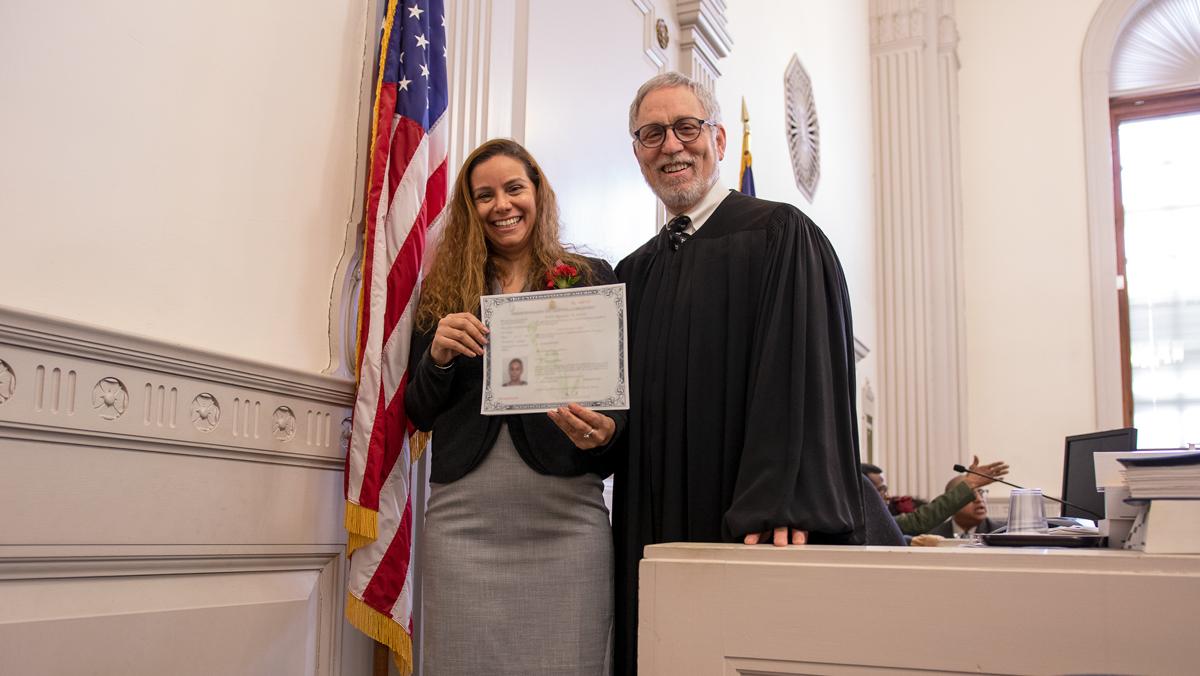 Abbey London/The Ithacan
Mirit Hadar-Bessire, lecturer in the Ithaca College Department of Modern Languages and Literatures, officially obtained her citizenship Feb. 19 at the Tompkins County Courthouse. She was one of 35 citizens in Ithaca who were naturalized by Judge John C. Rowley that day.
By Abbey London — Photo Editor
Published: February 27, 2020

Twelve years ago, Mirit Hadar-Bessire, lecturer in the Ithaca College Department of Modern Languages and Literatures, fled her home country of Israel with her 1-year-old son, Leeyam, toward the end of the Second Lebanon War.

“There were bombs everywhere [and] missiles coming from Hezbollah,” she said. “I said, ‘No more. That’s it. I’m done.’ … Lives in Israel were never easy. It’s always war, always something going on and terror attacks, and I just had to live in peace.”

She was one of 35 citizens in Ithaca who were naturalized by Judge John C. Rowley that day. Thirty-five petitioners took an Oath of Allegiance to the U.S. during the ceremony to finalize the legal status of the new citizens.

In Ithaca as of 2018, approximately 18% of the population was foreign–born, and approximately 12% were noncitizens, according to the World Population Review. On Feb. 2, 2017, the City of Ithaca Common Council unanimously approved Ithaca as a sanctuary city to provide refuge for immigrants, as previously reported by The Ithacan.

Hadar-Bessire said the thing she is most excited to do now is to vote in the upcoming 2020 presidential election.

“When you are an immigrant, you are held to very high standards,” she said. “You are always afraid that if you … [do something] wrong, you’d be deported. … [Now] nobody’s going to deport me … I can vote. I can make my voice heard. I can protest. I can be involved.”

Hadar-Bessire was raised by Israeli-born parents of mixed heritage in the small suburb of Azur, Tel Aviv.

Her paternal grandparents emigrated from Yemen through “Operation Magic Carpet,” which was part of a series of missions where the Israeli army rescued Jews abroad who were facing anti-Jewish oppression and violence. The operation, which took place between 1949–50, airlifted approximately 46,000 Jews from Yemen to Israel.

Her maternal grandmother was a Zionist pioneer born in Jaffa to parents who fled the Russian region of the Ottoman Empire because of anti-Semitism. However, her maternal grandfather was born outside of Kiev, Ukraine, where his entire village was wiped out during the Holocaust. Ukraine was the sight for many pogroms and massacres during the Holocaust, including the Babi Yar massacre in Sept. 1941 where nearly 34,000 Jews were marched, stripped naked and shot with machine guns into the Babi Yar ravine in Kiev.

Most of her family — including her parents, her brother and three nieces — still live in Israel, and she said she mostly talks to them over Whatsapp because flights are expensive.

“As they say… you can take an Israeli out of Israel, but you cannot take Israel out of an Israeli,” she said via email. “Of course I miss my family and friends, and also the food, traditions, and culture, but yet I have built a wonderful life for myself here in America, which I am very grateful for, and proud of.”

She said she still reads Israeli literature, subscribes to Israeli television channels online and listens to Israeli music, which also contributes to the content she teaches in her classes.

She said that she came to the U.S. during a sabbatical but ended up staying here to create a better life for her family. She started working at the college in 2012 to teach Hebrew in the Department of Modern Languages and Literatures and an Israeli film course in the Department of Jewish Studies. She also co-founded the Israel Film Festival at the college in Spring 2014, a festival that she now directs.

Once she was released from her service, Hadar-Bessire attended Haifa University in Haifa, Israel, to obtain a bachelor’s degree in Semitic linguistics and comparative literature. Hadar-Bessire can speak Hebrew, English and some Arabic.

She also obtained an advanced diploma in postsecondary language acquisition, which gave her a teaching diploma, from Tel Aviv University in Tel Aviv, Israel.

Anyone who is filing for naturalization must have a permanent resident green card for a minimum of five years or before continuing on with the process. Hadar-Bessire said she now holds dual-citizenship in Israel and the United States.

In Ithaca, Hadar-Bessire met her husband, Brian Bessire, who formerly worked as a director and senior strategist in the Office of Strategic Marketing and Communications at Ithaca College. He now works as an associate director of integrated marketing at the Johnson School of Business at Cornell University. The couple got married Aug. 17, 2019, a year after getting engaged. They now have a family of five with his two children and her child from their former relationships.

Bessire said the process was long and bureaucratic, so he is thrilled the wait is finally over.

“I’m feeling joy and relief now,” he said. “But along the process, I felt a little bit of frustration that it was a little bit cumbersome. … I think it’s the best thing I could have hoped for… [She] is a big believer in liberty and expression and exchange of ideas. And this is [her] home now, and I feel like it’s very appropriate and sweet.”

Sophomore Luna McCulloch was one of a few students who attended the ceremony Feb. 12 to support Hadar-Bessire. She said that she took Elementary Hebrew I with Hadar-Bessire in Fall 2019 and that Hadar-Bessire has had a huge impact on her experience at the college.

“Mirit has influenced me by showing me that education isn’t necessarily always about getting the right answers,” she said. “It is about making mistakes and being okay with making mistakes and learning from your mistakes. But she’s also influenced me through her story. … Just the fact that she’s so willing to talk about her story openly and kind of let other people learn from her experiences … is really cool.”

Junior Shoshana Maniscalco has taken every available course taught by Hadar-Bessire at the college, including all levels of Hebrew and Israeli Culture through Film. She continued in her Hebrew education by working as a teaching assistant under Hadar-Bessire.

Maniscalco could not attend the ceremony because she is currently studying at the Hebrew University of Jerusalem through The Nachshon Project, which is a Jewish leadership program, but she said she has learned a lot from Hadar-Bessire in college.

“Mirit has encouraged me to take on new leadership opportunities both at the college and in the community,” she said. “She also has helped me to become more confident and a stronger leader. I am incredibly happy for her now that she has obtained citizenship. She has contributed a great deal to the campus community, and I know she will continue to do so in the future.”

Hadar-Bessire posted on her Facebook after the ceremony to celebrate her new citizenship.

“That’s it!,” she posted on Facebook the day she became a citizen. “I put down my suitcases today. … America is my home. … No society is perfect, but this one is pretty close to it. … You can speak your mind and act and contribute and educate and learn and grow if you only wish to do so. … I am so lucky to be [an immigrant], as there are so many living in limbo and waiting to call this country home. What makes this place so beautiful is its diversity, its freedom but most of all its democracy, and I do plan to exercise it in 2020 so it will stay that way.”

Maniscalco was a copy editor for The Ithacan.