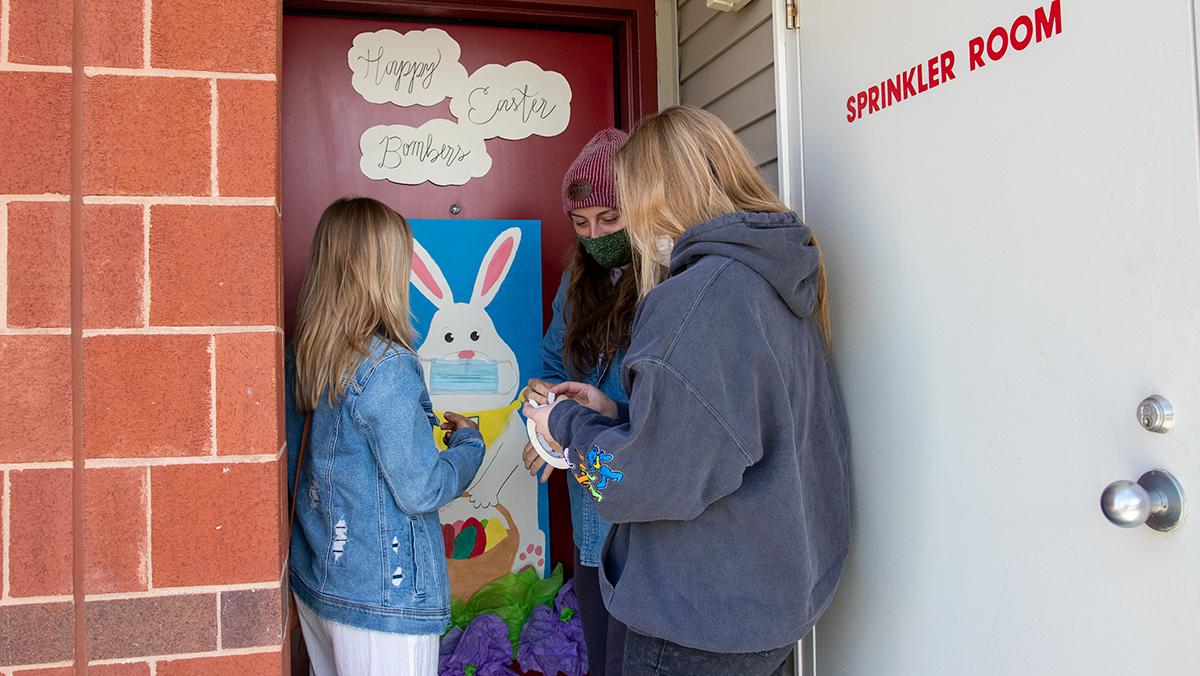 Mikayla Elwell
From left, juniors Morgan Mullen, Grace Ziehnert and Allison Egan decorate their Circle Apartment's door for the Deck Your Door event April 3. A viewing of the doors was held from 2–4 p.m. April 3 and voting was online and in person.
By The Ithacan
Published: April 8, 2021

The Ithacan was named a Gold Medalist for the 2019-20 academic year in the Columbia Scholastic Press Association’s (CSPA) annual college publication critique. Sophia Adamucci ’20 was the editor in chief and Zoë Freer-Hessler ’20 was the managing editor. Judges evaluated issues of the paper and the website. The CSPA also scored The Ithacan at 985 out of 1,000 points on the critique scale which is the highest score the paper has received in the past decade. The Ithacan was also awarded All Columbia Honors which is a citation for special merit in all three critique categories. The categories were Essentials, Verbal and Visual. The publication was in the hybrid category, meaning it is a print publication that provides live coverage on its website in between print editions.

The Ithacan also received the Silver Crown from the CSPA in March, which is different than the organization’s critique.

The Society of Professional Journalists (SPJ) named The Ithacan as a finalist “in one or more categories” in this year’s Region 1 (Northeast Region) Mark of Excellence Awards. The winners will be announced at this year’s SPJ Virtual Regional Conferences April 10 and April 14–15. The awards are for the 2020 calendar year. Adamucci was editor in chief for Spring 2020 and senior Madison Fernandez was editor in chief for Fall 2020.

The event is called “SUPERvision: Celebrating Student Employees!.” Student Employee Appreciation Week is being held April 12–16 and this event is an opportunity for supervisors to learn and share ideas on how to show appreciation for student employees.

Faculty and staff invited to participate in survey about career advice

Faculty and staff members are invited to participate in a survey about the knowledge and competencies used when giving career advice to students.

The survey is part of a project run by Arielle Newman, a master’s in Higher Education student at Montclair State University in Montclair, New Jersey. The survey’s purpose is to understand the support that faculty and staff need and want to help students in their career development.

Responses to the survey are confidential and anonymous and will take 3–5 minutes to complete. Questions will be about conversations with students related to career development.

The Ithaca College Sexual Violence Prevention Committee is hosting a virtual event series to screen and discuss a docuseries.

The series will allow students, faculty and staff to reflect on and discuss the films and how they relate to their own lives. Each event will screen one episode of the series and will be followed by a guided discussion.

The Park Roundtable series is hosting an event at 6 p.m. April 8 to discuss future careers in esports and gaming.

The leaders are Jenn Mancini, director of client strategy at Twitch and the co-founder of Womxn in Gaming; Nathan Lindberg, senior director of Global Sponsorships and regional vice president for the East at Twitch; Justin Joseph, Emmy Award-winning creative director with over 20 years of experience in production, writing and directing for major entertainment outlets like HBO, GoPro, CNBC and the NFL Network; and Brian Terwilliger, vice president of Programming and Creative Strategy for the relaunching G4, returning to the comedy, gaming and geek culture-focused network. The event is hosted by Alex Estabrook, instructor in the Department of Media Arts, Sciences and Studies.

The Park Roundtable series gathers practitioners, leading experts and Park faculty in panel presentations to discuss key issues in the industries and professions.