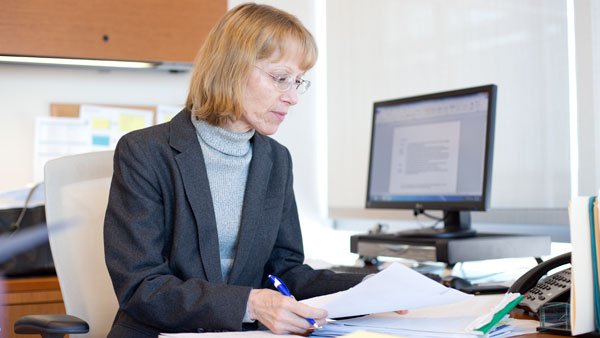 Ithaca College will soon begin the search for a new dean of the School of Business, as Mary Ellen Zuckerman, the current dean, prepares to leave the college at the end of the semester. In addition to Zuckerman, David Garcia, associate provost for business intelligence, will also be leaving soon.

Marisa Kelly, provost and vice president for educational affairs, said it’s not unusual for administrators at the college to be offered high-ranking positions at other colleges and universities.

“This is not an uncommon situation,” Kelly said in an email. “Higher education in general needs highly qualified administrators, so excellent sitting administrators such as Mary Ellen Zuckerman and David Garcia do get targeted by recruiters for other institutions.”

“As a dean at Ithaca College, you really get exposed to the breadth of issues in academic affairs and experience looking at them,” Zuckerman said. “I really thought I would like to move up to the next level of being a provost and have a chance to lead and interact and help people achieve goals in kind of a broader array of academic programs.”

During Zuckerman’s time at the college, the business school has created several new academic programs, including the Business Idea Competition, Sustainability Case Competition and High School Investment Competition. Under Zuckerman’s direction, the School of Business also began its involvement in the New York City Program, which allows business students to intern and study in the city. Zuckerman said she hopes programs like these will continue after she leaves.

“My goals are to ensure that the programs that we’ve been working on in the school for students, and that faculty have been so involved with, are in good shape and will continue on after I leave,” Zuckerman said.

Though Zuckerman is preparing to leave in the summer, she said she has taken pride in her work at the college. Zuckerman said the part of her job she has enjoyed the most is working with students, faculty and administrators.

In addition to his work in H&S and the Office of the Provost, Garcia also spent the summer of 2005 as acting director of First-Year Programs and Orientation.

After more than 10 years at the college, Garcia said he is eager to move forward with his career and taking on more responsibility.

“I think this was a great opportunity for me at this stage in my career,” Garcia said. “[Carthage College] is a campus that I think has quite a lot of potential, and it is benefiting from great presidential leadership.”

In 2012, Gregory Woodward, former dean of the James J. Whalen School of Music, was named president of Carthage College, where Garcia will be joining him — again. Garcia first worked with Woodward during the 2010–11 academic year when Woodward served as interim provost and vice president for academic affairs at the college. Garcia said he admires Woodward’s leadership and initiative.

Garcia and Zuckerman will both assume their new positions on July 1. Though they are leaving, Garcia said he appreciates all that the college has given him.

“Ithaca College has provided me with extraordinary opportunities for professional development, and I am and will continue to be grateful for those opportunities,” Garcia said.

Zuckerman said she is also grateful for her time at the college and is both excited and sad to be leaving.

“I’ve had a great experience, and I feel like I’ve really learned a lot being here at Ithaca, and I’m very grateful for that,” Zuckerman said. “I’m excited about the new job, but I regret leaving everything that’s here, so it’s bittersweet.”