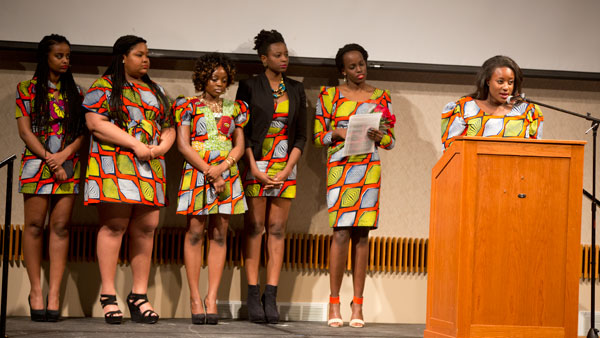 The African Students Association concluded Africa Week on April 5 with the Mauya Banquet in Emerson Suites, which featured a guest speaker, musical performances and the crowning of Mr. and Ms. ASA. The theme for this year’s week of cultural festivities was “Celebrating our Ancestors.”

Jarra Jagne, senior extension professor of population medicine and diagnostic sciences at Cornell University, gave a speech about the truth behind international aid to African countries. Jagne said since 1960, trillions of dollars in aid has gone to African countries, yet a majority of the money is often kept by the charities residing in those countries, and projects that are supposed to be helpful are useless to the locals they intend to benefit.

She said foreign aid creates many jobs, and therefore corporations and First World countries that provide aid do not desire to actually eliminate poverty. She called this the “poverty industrial complex.”

Senior Arit Ntekim, president of the ASA, said Jagne’s speech enlightened her on the idea of charity for Africa.

“[Jagne] explained how in the end these charities keep majority of the money people donate and leave very little for the Africans they claim they are ‘helping,’” Ntekim said via email. “Also the charities, who are mainly run by Westerners, go about perpetuating stereotypes that are not true about African countries.”

Student performances followed Jagne’s speech in celebration of African culture. Island Fusion, a new student African dance group, put on a performance; senior Dubian Ade shared his spoken word poetry, with one piece about the origin and meaning of his name; the Amani Gospel Singers performed two songs; and the IC Steppers created rhythmic beats with each step of their dance performances.

Lipford said his crowning was unexpected, and he was grateful for the award. Celebrating ancestry is important to understand oneself fully, he said.

“Before you can go anywhere, you need to know your own past and be able to celebrate who you were and the sense of being and becoming,” Lipford said.

After receiving their awards, Lipford and Tetteh had the first dance before the floor opened to everyone.

Ntekim said Africa Week took a full year of planning. The executive board held weekly meetings in which it spent hours organizing and planning for the event. She said she was pleased with the turnout to the Mauya Banquet.

In addition to the Mauya Banquet, Africa Week featured an event each day and kicked off March 31 with a speech from Mukoma Wa Ngugi, assistant professor of English at Cornell University. Ngugi is a novelist, poet and literary scholar from Kenya.

There was also a screening of the documentary “Lumumba” on April 1, a film about the life of Patrice Lumumba and the struggle for the Democratic Republic of Congo’s independence. Island Fusion hosted a dance workshop April 2, featuring cultural dances from across the African continent. A panel discussion about how black men maintain their identity and culture called “Brothers, stand up!” was held April 3.

“The Ithaca College community needs to be enlightened when it comes to all areas that pertain to minority groups,” she said in an email. “I think that Africa Week, Focus Asia Month, Black History month, Latin Heritage month, etc. do start up those conversations and bring awareness.”