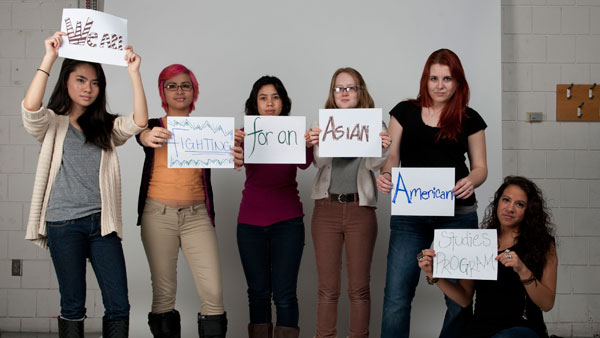 Rachel Orlow/The Ithacan
Members of the Committee for Inclusive Education have been fighting for an Asian-American Studies minor at Ithaca College for more than a year.
By Candace King — Assistant News Editor
Published: September 20, 2012

After nearly two years of debate, an Asian-American minor was officially approved Monday by Marisa Kelly, provost and vice president for educational affairs.

The Committee for Inclusive Education, an on-campus group that promotes cross-cultural education, launched a campaign along with the Asian-American Alliance more than a year ago to include a minor program focusing on Asian-American history in the college curriculum. The movement included photo campaigns and educational workshops to outline the importance of having this program in the curriculum.

Lewis said she does not anticipate any obstacles in these final steps.

“[It] is moving along through the process, and I foresee no problem,” Lewis said.

If the process goes according to schedule, the minor will be approved for Fall 2013.

Asma Barlas, professor and program director for the Center for the Study of Culture, Race, and Ethnicity, said acquiring an Asian-American studies program has been a goal for the center, but they faced a roadblock because of the lack of professors to teach the program.

“The center is charged with developing an [African, Latino, Asian, Native American] ALANA-focused curriculum, and, so far, it was lacking a minor in Asian-American Studies,” Barlas said. “This is mostly because, until rather recently, there weren’t any faculty who were teaching courses in this area, and one needs to have enough courses before one can develop a minor.”

This proposal includes a new faculty hire to solve this problem.

Senior Kristiana Reyes, one of the key members of the movement, said she is pleased with the decision, and as a result, she feels empowered and proud of her identity.

“I felt really empowered that I can actually change things as a woman, as a student, as an Asian-American woman,” Reyes said. “I felt an overwhelming sense of my agency and how powerful I am as an individual.”

Reyes said the proposal’s approval is a testament to the power of collective activism among students.

The minor gained momentum last year, with the support of student organizations and faculty. The Committee for Inclusive Education launched a photo campaign, “We are fighting for an Asian-American Studies program,” to raise awareness on campus.

Through their efforts, they successfully gained the support of the Provost for the minor last semester on March 28.

Though the program is on track to approval, the committee does not plan to stop hosting workshops. In October, they will host a workshop at 7 p.m. in Clark Lounge called “Why Asian-American Studies Matter” as a part of the CSCRE annual discussion series.

“We love putting on the workshops that we put on that talk about intersectionality, that talk about colorblindness, that talk about why it’s important to have these discussions beyond the question of what is diversity,” Kristy Zhen, president of the AAA and a key proponent of the initiative, said. “Even though this approval has passed, we have no problem putting on programs and continuing these dialogues.”

Junior Tessa Crisman, member of The Committee of Inclusive Education, said the minor is cross-cultural because Asian-American history is American history.

“I definitely have people come up to me after events and ask me, ‘Well, why are you a part of this, you’re white?’” Crisman said. “My response is usually that if you want to call this country a melting pot or if you want to call yourself a global citizen or a U.S. citizen, then this is your history. U.S. history is not a white history, it’s an ALANA history. Without Asian-American Studies, it’s incomplete.”

The CSCRE has offered a Latino/a Studies and an African Diaspora studies minor since 2006. Members of AAA and other students advocated for program because of the lack of Asian-American influence on campus and in the curriculum.

Though she will not be able to see the program in full effect because she graduates this semester, Zhen said the approval is the right step for the college.

“I’m glad Ithaca College is showing their commitment to diversity by approving this program and bringing us a faculty line who can stay on this campus for a number of years to sustain the program,” Zhen said. “I’m really excited for the students who will be able to take these classes.”

With the minor on track to implementation, the committee turns their attention to empowering the next generation of voices.

“An important thing is to encourage underclassmen to realize that they are empowered, and they can change things if they put their minds together,” Reyes said.