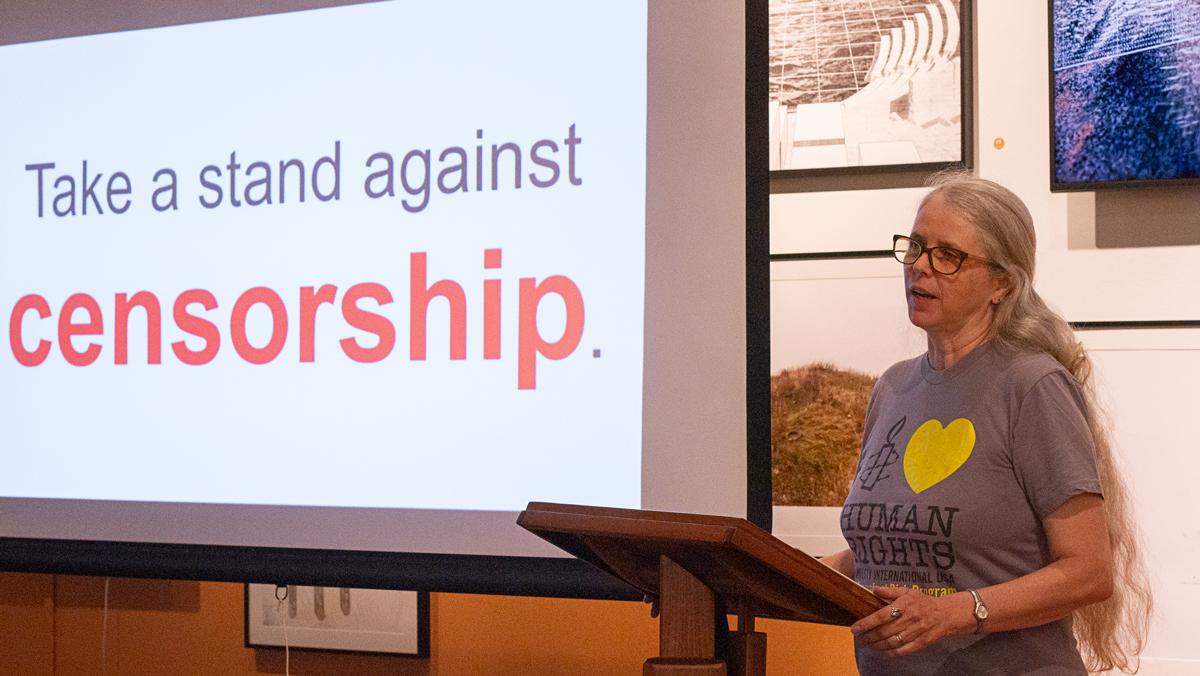 Frankie Walls/The Ithacan
Ute Ritz-Deutch from Amnesty International reads an excerpt from "I am Jazz" as a part of banned book week Sept. 24 at the Handwerker Gallery.
By Alex Hartzog — Staff Writer
Published: September 25, 2019

“The Catcher in the Rye,” “Animal Farm,” “Of Mice and Men” and “To Kill a Mockingbird.” All of these books were banned at one point in some form around the world. Ithaca College hosted a read-out during Banned Books Week focusing on works by author Toni Morrison, allowing attendees to read aloud banned books.

The read-out took place from 6 to 7 p.m. Sept 24 in the Handwerker Gallery. Approximately 30 community members showed up to the event, filling many of the available seats. At the event, seven attendees read some of their favorite books, many of which were banned books in some form or another.

The American Library Association, an organization that promotes libraries and library education in America, created a list of all the books that have been banned or challenged throughout history, including the aforementioned books, along with others like “Lord of the Flies” and “1984.” The event’s organizers pulled from this list for the readings.

Jennifer Spitzer, associate professor in the Department of English, began the event by talking about the late Morrison, who died Aug. 5. Spitzer discussed Morrison’s work and the various bannings her work accrued throughout her lifetime, such as “Song of Solomon” and “Beloved”.

“One of the singular frustrations about teaching Morrison is that once you get to one of her books in your course, all of the other books kind of seem superfluous,” Spitzer said. “You kind of wonder why you taught anyone else but Toni Morrison.”

The aim of Banned Books Week is to bring light upon censorship throughout the world of writers and libraries, Andrew said.

“Everybody who was here was clearly here because they wanted to be and because they felt strongly about fighting censorship,” Andrew said. “The readers were wonderful. It was a really wide variety of works that they read from.”

Wayles Browne, professor emeritus in the Department of Linguistics at Cornell University, spoke about banned languages at the event. Browne talked specifically about the Macedonian language and the oppression it has faced throughout history, such as when it was banned in Greece and treated as a dialect in Bulgaria and Serbia. Browne ended his speech with a poem in Macedonian titled “The Woman Embroidering.”

Junior Isabella Oliverio, a television-radio major, said she came to the event after hearing about it from her mentor Cathy Michael. She said she felt an obligation to stand up against censorship because the field she intends to enter is often censored. Oliverio read “The Great Gatsby” for the read-out.

“To me, Gatsby, while it is a sad story, I think embodies so much hope, especially for myself and the images of light you can come across throughout your life,” Oliverio said.

At the event, to further support the removal of censorship, Amnesty International members left out petitions in support of censored authors and journalists near the entrance. Andrew, along with Amnesty International representatives, asked attendees to sign the petitions. Many of the petitions were similar in nature, asking for various governmental bodies across the world to unban certain books or to release imprisoned authors and journalists.

For many authors, critical reception and popularity are not enough to save them from being banned, as in the case of Toni Morrison, Spitzer said.

“Toni Morrison … is one of the most challenged and banned authors of the 20th century,” Spitzer said. “So although she has become required reading in so many classrooms, all of her novels have sat at the top of the American Library Association’s top 10 list of banned and challenged books.”