The Ithacan
Dave Maley, director of public relations at the college, said there will be an increased police presence as a result of the incident.
By Ashley Stalnecker — Assistant News Editor
Published: September 6, 2019

Officers from the Office of Public Safety and Emergency Management decided there was no immediate threat to the Ithaca College campus community following a report of a suspicious person near Boothroyd Hall at approximately 6 p.m. Sept. 6, Tom Dunn, associate director of Public Safety, said.

Dunn said there was no reason to believe this person was related to the Green Street shooting Sept. 4. Andrae Martin, a suspect in the shooting, has not been apprehended. Dave Maley, director of public relations, said the college would have called the Tompkins County Police Department and state police regardless of the Green Street shooting occurring. Maley said the initial call gave them no indication that it could be related.

Public Safety was able to deem the community not in danger based on its interviews and from reviewing video footage from the scene, Dunn said. No one was judicially referred, Dunn said.

Because Public Safety was aware of misleading rumors regarding the incident, Dunn said the college’s Emergency Communication team sent out an email to clarify important details and dispel the rumors. The email was sent at 8:24 p.m., approximately two and a half hours after the initial report. 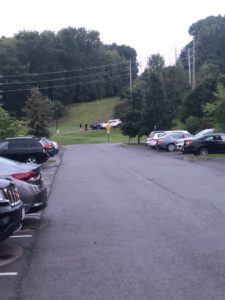 A suspicious person was reported near the Athletic and Events Center and Boothroyd Hall at approximately 6 p.m. Sept. 6.  Ashley Stalnecker/The Ithacan

The email, released via Intercom, reported a suspicious individual walking near the Upper Quad residence halls. The email also notified students of an increased Public Safety patrol presence for that night. The suspicious person was described as a white, college-aged male wearing a green plaid shirt and blue jeans.

RAs also received an email from Marsha Dawson, director of the Office of Residential Life and the Office of Judicial Affairs. This email clarified that there was suspicious activity on campus, but there was no immediate threat to the community. The email notified RAs of increased Public Safety presence and listed information for students to call for the Center for Counseling and Psychological Services after-hours services.