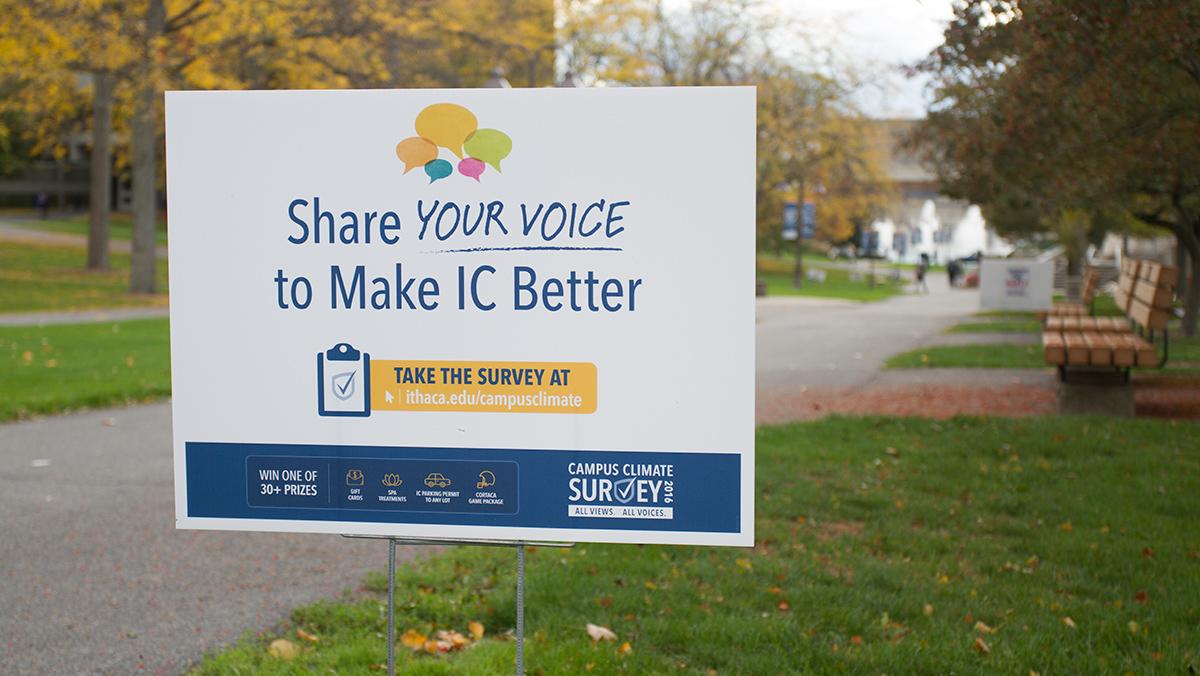 Ithaca College is renewing its efforts to incentivize students to take the campus climate survey, which closes Oct. 28 and currently does not have enough respondents for the college to release the results.

Since it was released Sept. 27, approximately 25 percent of the campus community had taken the survey as of Oct. 25, Roger Richardson, associate provost of diversity, inclusion and engagement, interim chief diversity officer and member of the Campus Climate Working Group (CSWG), wrote in an email. This is 12 percent less than the number of people who took the previous survey when it was distributed in 2012. Richardson wrote that 30 percent of the campus community must take the survey for Rankin & Associates Consulting, which is responsible for its implementation, to release the results.

To encourage participation in the survey, Richardson and Linda Petrosino, provost and vice president for educational affairs and member of the CSWG, sent an email to students Oct. 25 offering $10 in ID Express money to the next 500 students who take the survey. The money to fund this promotion came from members of the Alumni Association Board of Directors, Richardson wrote.

The CSWG also sent an email to staff and faculty members reminding them to take the survey. The email does not include any new promotional offerings. It explains why taking the survey is important and outlines the potential prizes for survey participants, which include a free parking pass for the spring semester in any lot, a game-day package for Cortaca, and gift certificates to local spas, restaurants and theaters.

“Your open and candid feedback will help chart the course for IC to become a better, more welcoming, and more meaningful place to learn, live and work – for you, your colleagues, and our students,” Petrosino and Richardson wrote in the email. “It’s your opportunity to describe your personal experiences at IC and offer suggestions that our next president can use in identifying priorities for improving the college.”

The Student Governance Council has also made efforts to increase the number of survey participants. The SGC wrote an open letter Oct. 25 encouraging campus community members to take the survey. The letter refers back to the protests that occurred Fall 2015 and calls on the campus community to continue voicing its opinion — through this survey — as it has in the past.

“It is a critical time for us to take charge of our lives and experiences here at Ithaca College and mold the institution to meet our needs as a community,” the letter said. “We cannot effectively move forward without the engaged support of every voice on campus.”

Senior Yaw Aidoo, an international student from Ghana and president of the African Student Association, said he thinks the low turnout for the campus climate survey comes from students’ belief that nothing will be done with the results.

“When there’s a pattern of we make demands to make the campus better and two or three things come out and it’s still the same, you don’t get people’s trust,” Aidoo said. “And I think there’s a correlation between that and how people are responding to this climate survey. Because people get, at a point, tired. You lose their trust. It’s like people say, ‘If I fill this out, nothing is going to come out of it.'”

Thomas Swensen, professor and chair of the Department of Exercise and Sport Sciences and chair of the Faculty Council, said he hasn’t heard many conversations about the survey, aside from quick conversations he’s had with a few colleagues, and expects that more discussion will arise when the results are released.

“It could just be that this sparks some conversation and gets tabled to the next president,” he said.

According to the campus-climate survey website, the results will be reported Spring 2017.