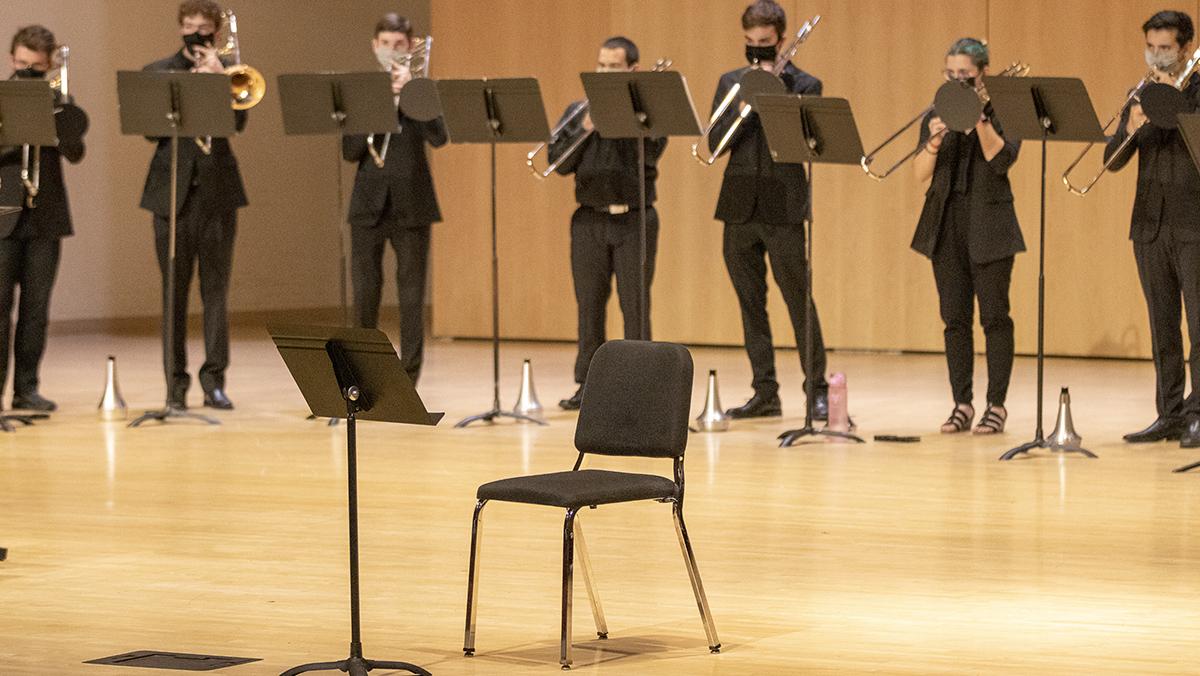 Lauren Leone/The Ithacan
The School of Music hosted a memorial service in person and on Zoom for Harold Reynolds that was full of kind words and trombone tributes of his favorite songs from alumni and former faculty members. Individuals who knew Reynolds personally gave heartfelt testimonies to a packed auditorium on the time they spent with Reynolds and emphasized his good nature and humor. The service was followed by the Trombone Troupe Concert, of which Reynolds used to be artistic advisor and director.
By Elizabeth Kharabadze — Staff Writer
Published: November 17, 2021

Ithaca College students, faculty and alumni gathered Nov. 12 to honor the life and legacy of Harold Reynolds, retired assistant professor in the Department of Performance Studies at the Ithaca College School of Music, after his death.

The School of Music hosted a memorial service in person and on Zoom for Reynolds that was full of kind words and trombone tributes of his favorite songs from alumni and former faculty members. Individuals who knew Reynolds personally gave heartfelt testimonies to a packed auditorium on the time they spent with Reynolds and emphasized his good nature and humor. The service was followed by the Trombone Troupe Concert, of which Reynolds used to be artistic advisor and director. Current members of the Trombone Troupe played songs in honor of Reynolds and his legacy with the troupe. “Three Sketches for Trombone Choir” was composed by Nathan Tanouye, associate professor of jazz studies and studio trombone at the University of Nevada, Las Vegas, for Reynolds before his death and was played for the first time at the concert.

Reynolds’ death was announced to the campus community Aug. 30. Reynolds worked at Ithaca College for 33 years.

There were many speakers who spoke about Reynolds’ kindness. Diane Birr, professor in the Department of Music Performance, said Reynolds — who was frequently referred to as Hal or Doc by his students and colleagues — was someone who was especially welcoming of everyone, including herself upon her arrival to the college in 1993.

“Hal was one of those faculty members who welcomed the newcomers with grace and open arms,” Birr said. “He served as a mentor to many of them, and he always had time to say hi with a smile on his face and with a joke at the ready.”

Birr also said Reynolds was an incredibly diverse musician capable of playing in multiple different styles of music, including classical, chamber and jazz.

“Hal and I frequently collaborated over the past several decades, and I have to say that I’ve had the great privilege to perform with some great trombonists in my life, but none can compare to the sweet, sweet, sweet tone that was present in Hal’s playing,” Birr said.

Timothy Smith ’03 said he recalled a moment during his time at the college where Reynolds calmed his nerves before a big concert. Smith said Reynolds always knew what to say.

“I just had a flashback sitting here to my junior recital when I was freaking out backstage, and Hal came back, bopping into the room and saying ‘Alright, go have fun,’” Smith said. “It’s like he always knew what to say.”

Mike Dobranski ’01 said Reynolds was a teacher who cared more for his students and supporting them than he did about his own accolades.

“It was never about him or his reputation, or his status … better than any educator I’ve ever known, Doc genuinely cared deeply about each and every one of us as individuals,” Dobranski said. “It was beyond making us the best trombone players we could be or the best teachers. He was devoted in his work to support us as people trying our best to live the lives we hoped to live.”

“I can guarantee that every single person in this room learned a great deal from [Reynolds],” Dobranski said. “I believe it’s because he was always the example we wished to be, whether it was through playing duets, him playing with Trombone Troupe rather than conducting, him being the guy you always wanted to be on a gig with, or him reaching out to you right when you needed someone to offer a hand or an ear — Doc always led by example, as a musician, a teacher, a colleague and as a friend.”

Russell McKinney, former student and colleague of Reynolds, gave his remarks virtually in a pre-recorded video. He said that he met Reynolds in 1979 as a high school senior and that he was great at motivating his students through his sense of humor and his joyful personality.

“Though my time as a student with Hal was comparatively brief, he had a lot to offer and was a significant and lasting influence on me and my musical path,” McKinney said.

McKinney also said Reynolds’ death was especially hard for the community because of his joyful personality.

“Hal was always so full of life and his sudden departure from this world is I think particularly difficult.” McKinney said. “Coming through the midst of this pandemic when we’ve all been isolated made it harder still … but I will offer this as perhaps some comfort, Hal gave so generously of himself to everyone he met, that part of his … spirit lives on in each one of us that knew him.”

Mark A. Radice, retired professor in the Department of Music Theory, History and Composition, said his memory of Reynolds goes back to 1976 when they were both doctoral students. He said he credits the success of the trombone studio at the School of Music to Reynolds and his dedication to the students.

“There was sort of a revolving door in the trombone studio in ’86, ’87 and ’88, and Hal was the anchor who really got that studio focused and stable and remained there and dedicated all of his time and talent and energy to cultivating that studio,” Radice said.

“He was thinking about people’s needs,” Radice said. “I think a lot of us are feeling an empty world since Hal’s demise.”

Aaron Burgess, conductor and faculty advisor to the Trombone Troupe, said that while his relationship with Reynolds was relatively new, he would echo that Reynolds was someone who was very involved with his students and encouraged them to reach their highest potential — both as musicians and as people.

“He liked to play in the ensemble,” Burgess said. “He started off as the conductor of the group, but he really valued his time modeling how to play trombone and he much preferred to play with his students than to be up in front of them.”

Junior Justin Lordi, member of the Trombone Troupe, said he had many fond memories with Reynolds — particularly playing duets with him before class during his freshman year.

“[Reynolds] would just want everyone to not look back on his passing as a sad moment, but as a joyful moment because that’s the kind of person he was,” Lordi said. “He’d always spread joy to all his students. He’d always put their mental health first and make sure they were okay before anything else.”