Change in the air: e-cigarettes are a growing trend among students 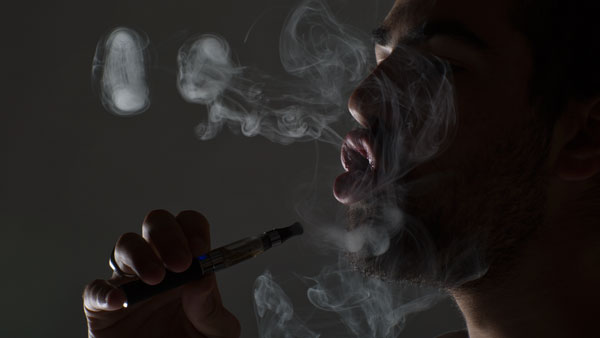 A student sits down at a table in the Ithaca College Library, pulls a cigarette out of his pocket and takes a few puffs. A few heads turn as he takes a final drag before plugging the cigarette into his computer.

While in high school, junior Ben Kohan said, he smoked as much as a pack of cigarettes a day. He was eventually able to quit, but after four years smoke-free, he said, he returned to tobacco over the summer. In order to help him quit again, he switched to a new method: electronic cigarettes.

“If I have it on me, I am probably using it,” Kohan said. “It’s part of the oral fixation thing where if you have a sandwich in front of you, you’re going to eat it.”

Electronic cigarettes, or “e-cigs” as they are commonly known, are small plastic cigarettes that heat liquid nicotine into a vapor that can be inhaled.

The liquid comes in different flavors, such as Cherry Crush or Piña Colada, as well as varying nicotine levels. The devices themselves can be single or multiuse, the latter costing upwards of $100.

According to the Center for Disease Control, 6 percent of adults tried e-cigarettes in 2011, nearly twice the 2010 percentage.

A New Zealand study, which was published Sept. 7, has determined that e-cigarettes are more effective than nicotine patches in helping smokers quit.

The study revealed that the success rate for people trying to quit smoking using nicotine filled e-cigarettes was 7.3 percent, while the rate for those using the patch was 5.8 percent.

However, the devices are not marketed as cessation devices, but rather as a smoking alternative, because under U.S. law, companies that make health claims are subject to regulation by the Food and Drug Administration. In an email, the CDC confirmed that, “E-cigarettes not marketed for therapeutic purposes are currently unregulated by the Food and Drug Administration.”

The industry is projected to hit $1.7 billion this year, twice as much as the year prior.

Michael Frennier, the general manager of Unique Cigs, an e-cigarette business with a branch in The Shops at Ithaca Mall, said the return of college students for the fall semester coincided with a marked increase in sales.

“When parents bring their kids back to college, they’d rather see them vaping on electronic cigarettes than smoking a traditional, analog cigarette,” Frennier said.

The company, founded in 2010 with a single mall kiosk in Clay, N.Y., has grown to include eight stores, with a ninth set to open by the end of the year.

“The growth has been so overwhelming that we’ve had to move the [Ithaca] store to a larger location in order to accommodate more customers,” Frennier said.

Cost is just one reason for the increased popularity of e-cigarettes. Kohan said the savings are an added benefit of using a product more discrete than tobacco cigarettes.

According to V2Cigs, a company that sells e-cigarettes, a person who smokes a pack a day would spend an average $182 per month, while a comparable e-cigarette equivalent is just $45.

“Ever since I got a [re]chargeable one, I’ve spent so much less [money] on nicotine,” Kohan said. “And if you don’t want to be seen as someone who smokes, it’s an easy thing to smoke incognito. You can just slip into the bathroom or slip inside or just go somewhere and puff on it.”

College policy currently limits tobacco cigarette smoking to specified outdoor areas. However, Bonnie Prunty, director of residential life and judicial affairs and assistant dean for First Year Experiences, said in an email that the college has no policy regarding the use of electronic cigarettes.

As part of Tompkins County policy, it is illegal to use e-cigarettes in any county-owned structures or property. Ithaca’s own outdoor smoking ordinance, which bans smoking in places like playgrounds, natural parks, outdoor dining areas and The Commons, does not currently include e-cigarettes.

The FDA has held discussions with companies regarding a possible ban of the online sale of e-cigarettes to prevent consumption by minors. Similarly, Governor Andrew Cuomo signed a law last year prohibiting the sale of e-cigarettes to minors. Other states, like New Jersey, Utah and North Dakota, have banned their use indoors. Moreover, it is currently illegal to use them on planes, as well as on many train and bus systems.

Senior Tori Gates, president of Students for Sensible Drug Policy, said the group will work to inform students about the benefits and drawbacks of e-cigarettes.

“[We’ll] let them know that the World Health Organization has yet to put out any studies on the health benefits of e-cigarettes,” Gates said. “It’s an uncharted health territory right now.”

However, Nancy Reynolds, program director of the center of health promotion at the college, said she can see the benefits of the devices.

“I could see some potential in terms of helping students quit smoking, because different smoking cessation modalities are going to work for different students,” she said. “Some students may find the e-cigarette a helpful modality to help them cut down on tobacco use. So I can see some harm-reduction potential, which I think is very positive.”

Though Kohan said the nicotine levels are deceivingly high, e-cigarettes can be a cessation tool if used properly.

“If you’re one of those people who is thinking about quitting cigarettes, definitely be aware of how you smoke e-cigs,” Kohan said. “They can get you pretty addicted pretty quickly, because they’re never not lit. You end up sucking on it all day and end up getting more addicted without realizing it. It’s definitely a good thing to ease yourself out of [smoking tobacco cigarettes]. You just have to be smart about it.”

Ted Schiele, the program coordinator for Tobacco Free Tompkins, a program in the county’s health department, said e-cigarettes are just another trend that companies are cashing in on.

“What I really believe is that it’s a product that people are trying to make money with,” he said. “Whether it’s electronic cigarettes or regular cigarettes, it’s still public drug use. The idea that e-cigs can be used anywhere is ridiculous, because you’re promoting addiction.”

Increased public exposure to e-cigarettes negatively affects people who are trying to get over their addiction, Schiele said.

The recent rise in e-cigarettes has also coincided with more smoking advertising on television.

Kathy Eliason, lifestyle coordinator at the Cayuga Center for Healthy Living, said new e-cigarette advertisements, such as commercials in which celebrities like Jenny McCarthy and Stephen Dorff urge consumers to “Take Back Your Freedom,” are proof that the tobacco industry is simply changing its sales strategy.

“The tobacco companies are looking for ways to sell their product, which is nicotine,” Eliason said. “You look at the ads, and it’s like, ‘What are they trying to do? Do they want people to quit smoking tobacco, or do they want you to use it in a different way?’ It’s just giving people another alternative.”

Eliason, who works to help people quit using tobacco with devices like the patch and a nicotine inhaler, said while she believes they will eventually receive FDA approval, she does not recommend electronic cigarettes as a cessation tool.

“I don’t think clinicians can recommend them until there is more research about them,” she said. “Until I know it’s a safe product I am not going to recommend it.”

Despite these claims, Kohan said he has no plans to quit using his e-cigarette.

“I really don’t want to be dependent on nicotine anymore,” Kohan said. “But it is working for me right now, so I am just going to continue doing this until I get tired of it.”