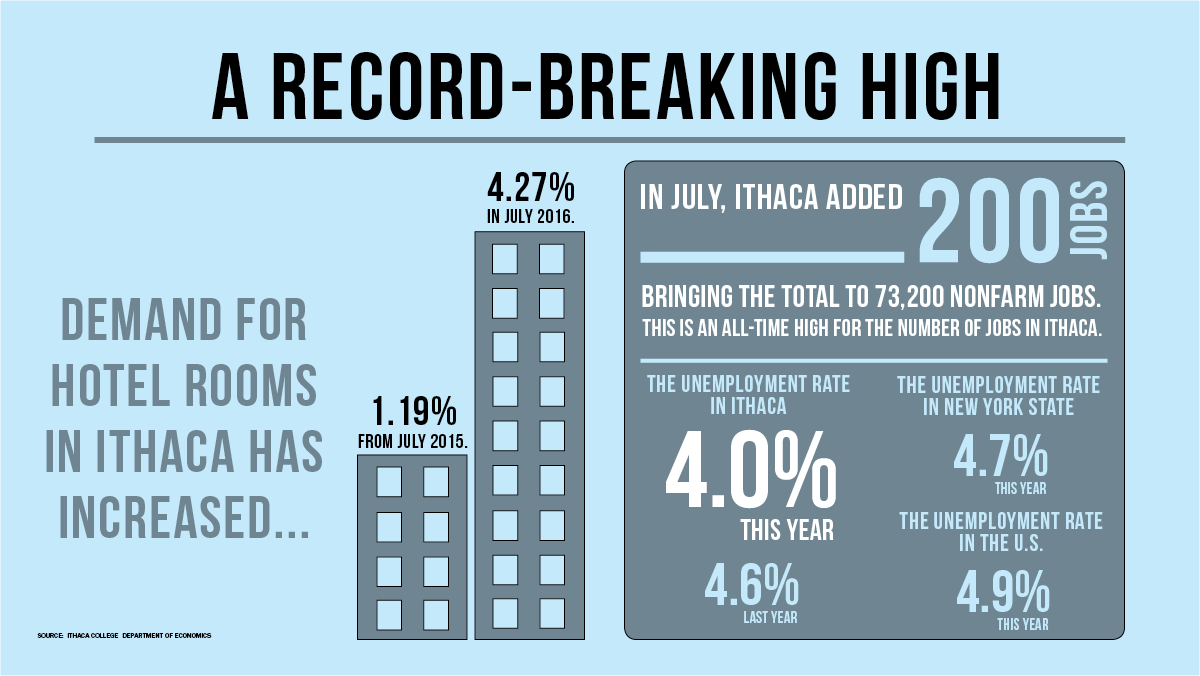 Alison Teadore/The Ithacan
The business index in the City of Ithaca reached a record-breaking high during the month of July, due to a boom in job growth and in the hospitality sectors, according to a monthly economic review of the city by the Ithaca College Department of Economics.
By Justin Henry — Staff Writer
Published: September 6, 2016

A monthly economic review of the City of Ithaca by the Ithaca College Department of Economics reported that the business index reached a record-breaking high during the month of July due to a boom in job growth and in the hospitality sectors.

Elia Kacapyr, professor in the Department of Economics, has published a monthly briefing on the economic fluctuation in the various sectors of Ithaca’s business since he started teaching at the college in 1985. Since then, the index has become a model for other economic monitors, such as those of Humboldt State University and the Southern Colorado Economic Forum.

The index is calculated by compiling the percentage of change in economic indicators, such as retail sales, hotel room demand and job listings. Percentages are then adjusted for changes in population throughout the seasons and weighted based on their significance in the overall economy and likelihood of variability. The values of each indicator are averaged and scaled so January 1985 contains the base number of 100. All other indices are evaluated in relation to this value. For example, since the July 2016 index is 172.09, Ithaca’s business sector has expanded 72.09 since January 1985 — the highest index recorded.

Kacapyr said this unprecedented economic boom makes for interesting times in Ithaca since there are still several sectors that have consistently declined, such as retail and real estate.

“No one knows why some sectors prosper and some sectors lag,” Kacapyr said. “There are theories why that’s happening, but nothing really concrete.”

Among the strongest indicators of economic growth is the increasing demand for hotel rooms, which increased by 4.47 percent in July, according to the study. The study highlights the hospitality sector as a “bright spot” in the local economy now for several years.

Phyllisa DeSarno, deputy director of economic development for the City of Ithaca, said this economic boom correlates with nationwide media coverage of Ithaca and the Finger Lakes Region as a travel destination, creating an unprecedented demand for hospitality services and job growth in the area.

JoAnn Cornish, planning director for the City of Ithaca, said the job growth in the hospitality industry is good for other areas of Ithaca business as well.

“I think we might be tipping the scales a little bit because of the hospitality industry,” she said. “We’ve been seeing a lot more restaurants and hotels. It’s a good thing, really.”

The study has highlighted retail and real–estate sales as limiting economic growth in the area. Realtors sold 51 homes in July, making for a seasonally adjusted decline of 19.65 percent since June 2016 and 36.43 percent since July 2015. Retail sales hit a high mark in 2013 and have since declined 11 percent.

There are no definitive answers to why these two sectors have declined, Kacapyr said, though many people have proposed theories. Kacapyr said the lag in retail sales might result from the fact that his study does not include the potentially vast number of online retail sales.

Kacapyr said one speculation as to why real–estate sales have declined suggests a growing demand for homes met with little supply. With fewer homeowners’ putting their houses on the market, the prices become out of reach for many locals trying to buy a home.

DeSarno said she finds it appalling that the housing prices in the city of Ithaca are so much higher than anywhere else in this region of New York. The median cost of housing in Ithaca is at $214,500, compared to $103,500 in Cortland County and $110,000 in Cayuga County, according to the New York state Department of Taxation and Finance.

“Someone from New York, New Jersey or northern California might come here and think, ‘Wow, these prices are a steal,’” she said. “But for someone local, those prices have really kicked up.”

The City of Ithaca recorded the highest job-growth rate in New York between 2002 and 2012, according to a recent report released by the New York state comptroller.