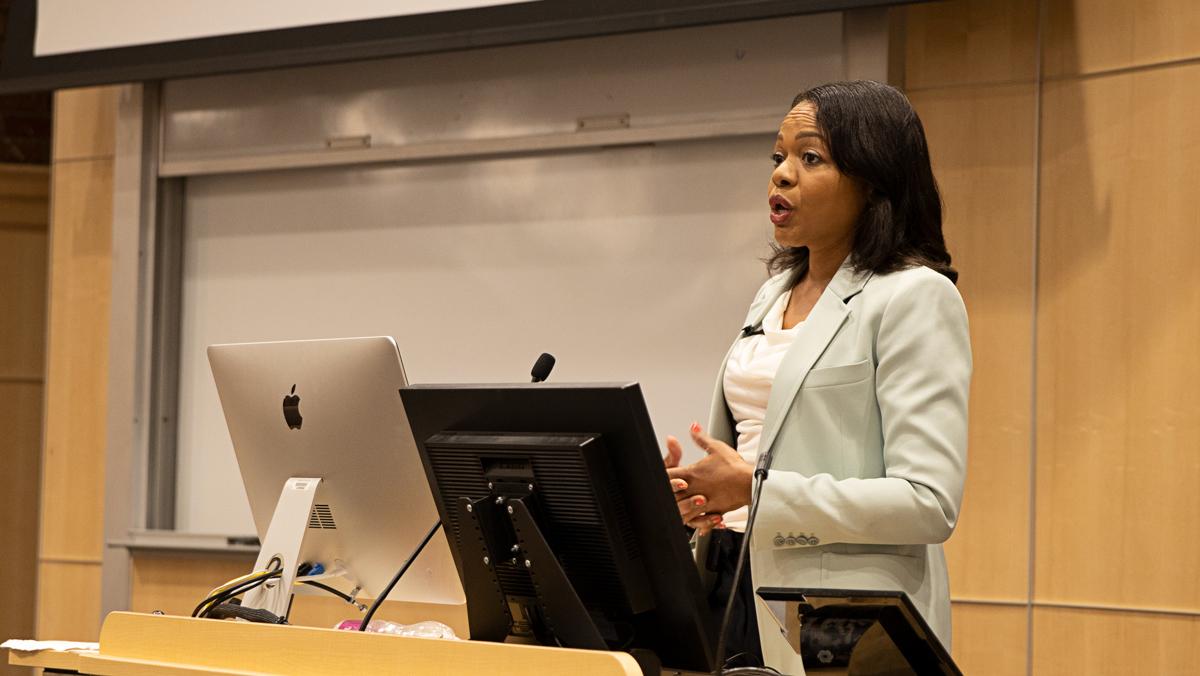 A forum was held Sept. 10 at Ithaca College detailing the rise of hate crimes and white supremacy in the United States and how students can combat hateful language.

The discussion, which was held in Textor 102, was led by Kristen Clarke, president and executive director of the National Lawyers’ Committee for Civil Rights Under Law. Clarke has worked for the organization for over three years, and she has appeared before the House Judiciary Committee to talk about hate crimes. Approximately 75 students and faculty were in attendance. During the presentation, Clarke described the history of violence against marginalized groups in America. Over the past several years, the prevalence of hate crimes has increased with hate crimes increasing by 17% in 2017, according to an FBI report.

According to New York state penal law, hate crimes are when someone is targeted because of their race, color, national origin, ancestry, gender, religion, religious practice, age, disability or sexual orientation.

Clarke spoke about lynchings that occurred over the past 100 years in the U.S. to contextualize the issues facing society today. The lynchings of Hayes and Mary Turner in 1918 elicited some gasps from the audience as Clarke described how Turner was brutally murdered along with her unborn child.

Clarke also detailed a specific case her organization was involved in. In 2017, Taylor Dumpson, the newly elected student government president of American University, was targeted by the neo-Nazis website “The Daily Stormer” for being black. Clarke was able to win the case in August when Dumpson was awarded over $700,000. Clarke said she hopes that the case will set a precedent for future cases involving hate crimes.

There have been incidents of hate crimes and aggravated assaults on the college campus in the past, including swastikas drawn in public spaces and a racist message posted in Williams Hall in 2018.

The event was cosponsored by Constitution Day, the Department of Health Promotion and Physical Education, the Department of History, the Finger Lakes Environmental Film Festival, the School of Humanities and Sciences, the Legal Studies Program, the Office of International Programs and Extended Studies, the Park Center for Independent Media, the Department of Politics and the women’s and gender studies program.

Following Clarke’s summary of these issues, audience members asked questions ranging from what students can do to address hate speech to how social media sites should properly regulate hate speech on their platforms. A study from the Anti-Defamation League found that 37% of Americans have experienced online hate and harassment in 2018. Compared to 2017, only 18% of Americans experienced online harassment, according to the study.

Senior Clare Nowalk asked how to get people with different viewpoints to listen to each other, especially after mass shootings like the one in El Paso, Texas, on Aug. 3.

Clarke said more people need to work toward calling out bad behavior, especially when they witness oppression that does not directly impact them.

Sophomore Dean Freeman asked about what can be done to address websites that have less obvious displays of hate speech. Clarke said her organization has been focusing on sites that explicitly push hate speech, like “The Daily Stormer,” and less so on sites without a clear message of hate speech.

“There is so much to be done that we’ve not focused on gray area,” Clarke said. “There are so many bad actors that are on one clear side here that that’s kind of where we have focused our efforts. We’re going after the platforms that are undertaking action and publicizing content and allowing people to abuse their platforms to incite violence and harm to communities.”

Sophomore Steven Floros said he thought the event was interesting because of the new information he discovered about the history of hate crimes in America.

“I haven’t been to an event like this before, and it’s kind of eye-opening,” Floros said. “I feel like you should speak out, and students I think should speak out and have events more like this. I don’t know if I’d speak out on it. To be honest I’m not that comfortable doing this, but I would honestly attend more events.”

Raj Subramaniam, professor in the Department of Health Promotion and Physical Education, said the college should host more events like this to have a more varied discussion with students.

“The dialogue should continue,” Subramaniam said. “It’s not just one hit and then we’re done. It should keep on going. We should build the momentum. We can’t have just hearing from the Democratic or the liberals only. We also have to hear from the other side. That makes you grow. You look at both sides, and then you understand why they are thinking the way they are thinking. It lets you really understand their thought process.”